Apple (AAPL -1.51%) kicked off the new year with a dire letter about its financial performance in the fourth quarter, warning investors that it missed its revenue guidance during the all-important holiday quarter. The news sent shockwaves throughout the market, and the company has been on the defensive in the week since. CEO Tim Cook continues to express optimism around Apple's long-term business and sat down with CNBC's Jim Cramer this week to discuss the company's prospects. 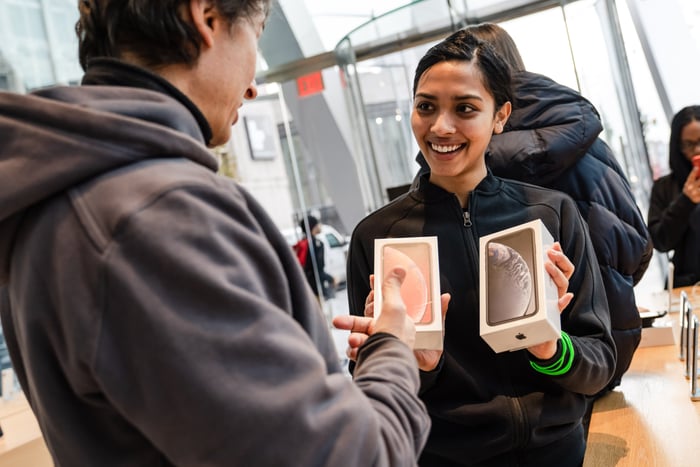 Apple set a goal to double its services business relative to 2016 levels by 2020. That means the company will need to hit $50 billion in services revenue for that year. The Mac maker has been making steady progress marching toward that goal every quarter, and Cook disclosed that services revenue in calendar 2018 exceeded $41 billion.

That figure reflects the reclassification of revenue that Apple previously mentioned due to the adoption of new revenue recognition standards. Apple defers and amortizes the value of certain software services that are included in its products. This revenue was previously included in hardware segments but is now being shifted to the services segment. The change resulted in a $2.5 billion positive adjustment to services revenue in fiscal 2018.

However, CFO Luca Maestri had said the "reclassification was not contemplated in our previously stated goal of doubling our fiscal '16 services revenue by 2020, that goal remains unchanged and excludes the revenue that's now shifting from products to services over that time frame." Yet Cook is now touting the reclassified number.

The iPhone XR has been the source of much consternation among investors, following countless reports of weak demand and production cuts. When asked how Cook would respond to the idea that iPhone XR has flopped, he fired back:

I say baloney. I call baloney on that. Let me tell you how I view this. Here's the truth, what the facts are. Since we began shipping the iPhone XR, it has been the most popular iPhone every day, every single day, from when we started shipping, until now.

That echoes marketing exec Greg Joswiak, who in November similarly said that the iPhone XR has been the "most popular iPhone each and every day since the day it became available." Cook conceded that he wishes Apple was selling more of the device, and is "working on that."

The world's second-most-populous country has been a tough market for Apple to crack. The company has struggled with building out retail infrastructure due to complex local regulations, and high prices have limited Apple's addressable market. Its smartphone market share in India tends to hover around a measly 1%.

Cook said that revenue in India was approximately $2 billion last year, which was flat "after rapid, rapid growth" in prior years. The chief executive elaborated on Apple's challenges in India:

And so we have more work to do. We'd like to put stores there. We would like some of the duties and so forth that are put on the products to go away. And we're working closely with the team there. And I believe that we'll have better results at some point in the future. I'm not in the forecasting mode here today. But it's an important market for us.

No end in sight to Qualcomm dispute

We're approaching the two-year anniversary of Apple's legal battle with Qualcomm (QCOM -2.50%), which has escalated and spread to courts all around the world. Cook said that Apple hasn't been in settlement talks since the third quarter, but reiterated why the company is fighting the mobile chip giant:

The issues that we have with Qualcomm is that they have a policy of no license, no chips. This is, in our view, illegal. And so many regulators in many different countries agree with this. And then secondly, the obligation to offer their patent portfolio on a fair, reasonable, and nondiscriminatory basis. And they don't do that. They charge exorbitant prices.

New services are coming this year

As part of its ongoing services push, Cook confirmed that Apple will "announce new services this year." Of course, Cook did not elaborate on what kinds of services he was referring to, but video streaming is undoubtedly one of them. There's also a premium news subscription service reportedly in the works.

The tech titan continues to push deeper into healthcare, and Cook discussed how democratizing healthcare could be "Apple's most important contribution to mankind." That implies that the company might even have some type of healthcare-oriented service in the pipeline.