Please ensure Javascript is enabled for purposes of website accessibility
Free Article Join Over 1 Million Premium Members And Get More In-Depth Stock Guidance and Research
By Travis Hoium - Updated Apr 22, 2019 at 11:55AM

Transportation is changing, and the motorcycle maker may be on the wrong side of the trend.

Business cycles affect every business in different ways, and the motorcycle industry is no stranger to ups and down. But Harley-Davidson's ( HOG 0.00% ) recent drop in sales seems to be more than just the result of a business or economic cycle, because normal patterns would suggest that the company should be growing on the back of a strong economy and rising wages. Underneath the headlines, there may be a structural decline taking place at the motorcycle icon.

Harley-Davidson's motorcycle sales are down dramatically in the U.S. over the last four years, and it's having a hard time attracting new customers. Given changes in consumer behavior, there's no reason to think a turnaround is near. 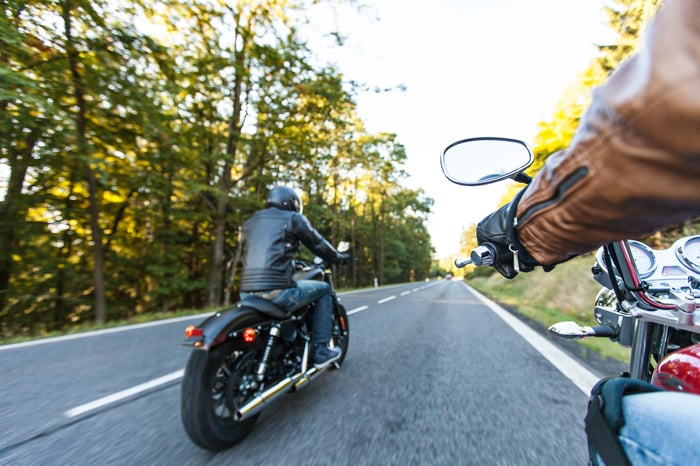 If declining sales of motorcycles were a one-time event, it wouldn't be a big problem for Harley-Davidson. But at this point, we can say that sales are in a structural decline in the U.S. motorcycle market.

European sales have held up better than the U.S., but that hasn't helped Harley-Davidson's U.S.-centric business. To make matters worse, the company has gone from a 10.5% European market share in 2015 to 9.8% in 2017, so it's losing share in its only strong market.

The future doesn't lend itself to Harleys

To its credit, Harley-Davidson has been an early mover in electric motorcycles with its LiveWire model, and that could open up a new market. But as my fellow Motley Fool Rich Duprey pointed out, a $30,000 motorcycle with a maximum 110-mile range that's built for urban users completely misses the mark for an already small and nascent market. It's hard to see why Harley-Davidson or EV enthusiasts would choose LiveWire for that price given their alternatives.

Maybe Harley-Davidson will eventually get its EV strategy figured out, but I think larger market trends are working against the company. Semi-autonomous vehicles are already on the road, and ride-hailing services are getting more popular by the year, especially with young consumers.

Efforts like LiveWire and model refreshes over the last five years have been aimed at attracting a new, younger generation of consumers. But it's hard to see why young drivers would choose Harley-Davidson over a self-driving ride share for their urban commute.

A long road to recovery

The chart below shows the long-term financial trends for Harley-Davidson, and they aren't moving in the right direction. Revenue and net income are dropping while debt is on the rise. That could put the stock's dividend into question in the next few years if the trends continue. 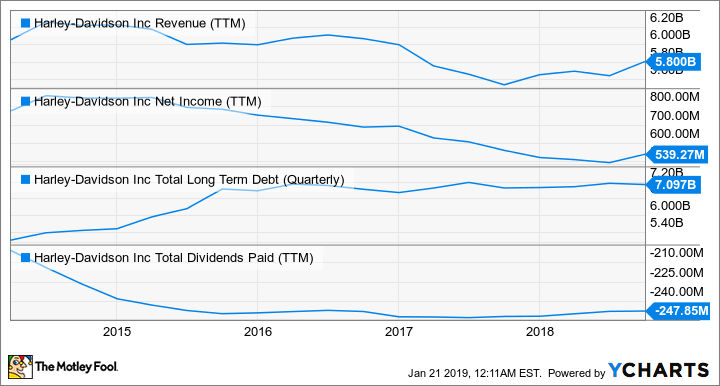 I think the real danger for investors is when a recession comes -- and eventually, it will. Motorcycles are a luxury purchase for most consumers, and sales can fall dramatically when a recession hits. Harley-Davidson isn't ready for that kind of jolt to the system.

Is Harley-Davidson Stock a Buy?