Space races can be good for business.

On that date, the People's Republic landed -- for the first time ever -- a robot on the far side of the moon. Launching from the Xichang Satellite Launch Centre in southwest China atop a Long March 3B rocket on Dec. 7, it took "Chang'e-4" just under four weeks to reach its objective, the Von Karman crater near the moon's south pole. There, Chang'e-4 deposited its Jade Rabbit 2 rover to tool around, snap a few first-ever close-up pics of the moon's "dark side," and conduct novel space experiments. In one, Chang'e-4 succeeded in getting a small plant seed to sprout -- the first new life on the moon!

In a bit of cosmic plagiarism, Chinese Lunar Exploration Project chief designer Wu Weiren declared the Chang'e-4 mission "a small step for the rover, but one giant leap for the Chinese nation," and also "a decisive move for our exploration of space and the conquering of the universe." Future plans include there-and-back-again missions to retrieve lunar soil samples, a Chinese manned mission to the moon, and, eventually, a manned space base on the lunar surface.

And just like that, a new space race was begun. 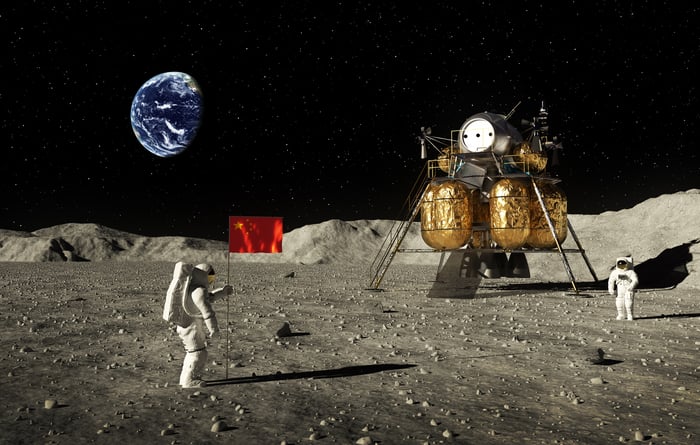 This month, China landed a robot on the moon. Next time, might it be Chinese astronauts, planting flags? Image source: Getty Images.

Some will argue this race has been ongoing for some time -- at least since China succeeded in landing its first rover on the moon in 2013 -- 44 years after the U.S. China's latest moon landing, however, adds a new dimension to the space race. Whereas 2013's landing merely matched an American accomplishment (and arguably fell short, because that mission, like this one, was unmanned), the success of Chang'e-4 notches a clear "first" for China, leapfrogging past the U.S. to explore hitherto unexplored territory.

Nor is China the only country aiming to catch up with, and even surpass, the U.S. in cosmic accomplishments. This year alone, India, Germany, and Israel plan to send their first landers to the moon (Israel with a little help from SpaceX). If they're all successful, that would double the number of Earth-nations to have landed on Luna. Both Japan and Russia plan to send landers early next decade, and by 2030, Russia plans to put its first cosmonaut on the moon.

As members of the human race, we should applaud China's (and others') achievements as successes for the human race. Don't expect the government to necessarily see things in that light, however. Competitive by nature, Americans are more likely to see China's (and others') successes in space as a challenge to be taken up -- and as proof that the U.S. space program needs more funding to keep up.

As Dr. Neil deGrasse Tyson and Avis Lang remind us in their latest book on the military history of astrophysics, Accessory to War, the reason NASA was created in the first place was to take up a challenge from the Soviet Union, which had put Sputnik in orbit just the year before: "Here we are telling ourselves we're the top of the world and...they put up a satellite, and we're nowhere near capable of doing that at the time."

After 11 years and billions of dollars, though, the U.S. not only closed the space gap but surpassed the USSR's achievements and landed a man on the moon. I'd expect a similar effort to get underway now that China is flexing its space muscles -- and that's the angle investors should be focusing on: how Chinese investment in space might spur further space investments by the American government and mean more space contracts for American companies.

For example, in order for America to land humans or even robots on the moon, it would help to have a lander capable of landing on Earth's satellite. Late last year, NASA announced a new Commercial Lunar Payload Delivery Services program for this purpose, naming nine separate companies in the running to win contracts to develop technologies to return America to the moon. Lockheed Martin (LMT 0.87%), one of the companies named in NASA's announcement (and by far the largest company named), is proposing to develop a reusable lunar lander that it says will be capable of shuttling back and forth between the moon and a proposed "lunar Gateway" orbital space station, carrying as many as four astronauts and a ton of supplies.

At the same time, companies large (Blue Origin, SpaceX, United Launch Alliance) and small (Rocket Lab, Vector) are developing rockets that could one day carry those landers (both large and small) to the moon. To help fund these efforts, Congress is in the process of appropriating nearly $1 billion in funds for accelerating U.S. efforts to return to and begin exploitation of the moon.

The greater the drumbeat of press releases announcing Chinese space successes, the greater will be the pressure on Congress to increase funding for NASA -- and its contractors -- to help the U.S. maintain pole position in the space race. As contracts are announced, we'll keep you up to date on the winners and losers in this latest space race -- and which companies to invest in to profit from it.