If you want to add renewable-energy stocks to your portfolio, then Enviva Partners, SolarEdge Technologies, and Darling Ingredients are worth watching.

Renewable energy has been growing by leaps and bounds in recent years, but the same can't be said about the stocks in this industry. Over the past year, the Dow Jones U.S. Renewable Energy Equipment Total Stock Market Index is down 23%. Concerns about solar panel tariffs in the U.S. and policy decisions in China to slow renewable-power development hit the industry hard.

For all those concerns, though, the long-term outlook for renewable energy looks incredibly promising. In addition to national and international initiatives to shift to renewable power, the economics for renewable energy are becoming better and better by the day, to the point that they are cost-competitive without subsidies or other incentives.

This long-term trajectory could make the most recent decline an opportune time to buy renewable-energy stocks. So we asked three Motley Fool contributors to each highlight a stock they think investors should have on their radar. Here's why they picked Enviva Partners (EVA), SolarEdge Technologies (SEDG 0.96%), and Darling Ingredients (DAR 4.72%). 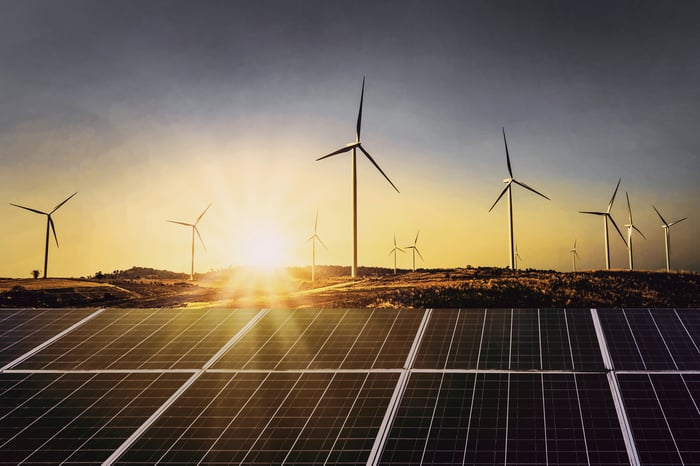 It's hard to overlook a renewable-energy stock with an 8.5% yield

Tyler Crowe (Enviva Partners): Enviva Partners isn't the kind of stock you think of initially when looking at renewable-energy stocks, but the wood-pellet producer and shipper has a lot of traits investors want from a reliable dividend-paying stock. For one, the company has locked up almost all of its current and future production capacity with long-term contracts. This ensures that its revenue will be relatively stable over the next decade -- its average contract length is 9.4 years.

What's particularly interesting about these contracts is that they bake in quite a bit of growth for the company. The current suite of contracts means Enviva Partners will need to increase current production by 53% between now and 2023. That equates to a contract backlog of $12.1 billion, for a company currently valued at less than $800 million. So there's plenty of room to grow, which will likely result in a higher payout to investors.

Enviva Partners isn't without flaws, though. The company's operating costs have fluctuated quite a bit in recent quarters, and it has struggled a few times to meet its payout obligations with cash from operations. Despite these challenges, management has continued to grow the payout at a blistering pace -- about 14% annually since its initial public offering. Even when the company has been able to cover its payout recently, there hasn't been much of a cash cushion. With so much growth in the wings, it's worth wondering if it's in Enviva Partners' best interest to prioritize payout growth over reinvesting in the business.

So far, though, the company has been able to accomplish both things at the same time, and it has rewarded investors handsomely along the way. It may be worth watching Enviva Partners for a few quarters to see if it can sustainably cover its payout, but it's certainly an often-overlooked stock to put on your radar.

John Bromels (Darling Ingredients): If you look at the five-year stock chart of fat renderer and grease recycler Darling Ingredients, it pretty much looks like a giant V (for "very compelling investment"?). The share price hit bottom in early 2016, right around the time that Darling announced it was going to ramp up its biofuel production, and has been steadily improving since. This month, you should be able to pick up shares for about the same price as you could five years ago, but with green energy as a much larger part of Darling's portfolio...and its future.

In 2016, Darling's Diamond Green Diesel joint venture with Valero Energy was already a bright spot in a portfolio that had been battered by weak global commodity prices. Management made a long-term bet on the business by announcing a 70% increase in annual production capacity, from 160 million gallons to 275 million gallons. Better yet, the expansion was to be fully funded from Diamond Green Diesel's proceeds, allowing the company to maintain its solid balance sheet.

The capacity increase was completed in October 2018, but management lost no time in approving yet another annual expansion of production capacity, this time by 145%, to 675 million gallons. The project, dubbed the Super Diamond Phase III, will likewise be funded with cash from Diamond Green Diesel's operations, and is expected to be completed in the fourth quarter of 2021.

In the meantime, Darling's price-to-earnings ratio is at the low end of its five-year range, while revenue and net income are at or near all-time highs. Even though you didn't buy at the bottom, this is an excellent month to consider buying into this offbeat renewable-energy growth story. 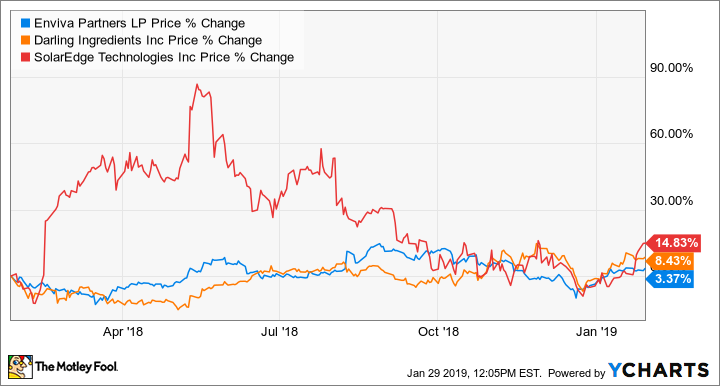 This solar-power play is taking its show on the road

Rich Smith (SolarEdge Technologies): It's only been a couple of weeks since I offered up solar-inverter maker SolarEdge as a "top energy stock to buy in January." But deeply enmeshed in the solar industry, as it is, SolarEdge is also a top renewable-energy stock to watch -- and as it turns out, January has been a very good time to start watching it.

On Jan. 7, you see, SolarEdge announced a deal to take a majority stake in Italy's S.M.R.E. SpA, a leader in "integrated powertrain technology and electronics for electric vehicles," including motorcycles, commercial vehicles, and trucks.

Investors seemed to like SolarEdge's decision to expand its business past solar power and embed itself further in the electric economy. Over the last couple of weeks, SolarEdge stock has soared 19% in value -- including a 3% pop Friday, when it was revealed that SolarEdge had closed its purchase of S.M.R.E., and indeed bought more shares than initially revealed -- a 57% majority interest, costing "approximately $85 million."

Priced at just 12.5 times earnings and expected to grow those earnings at 22% annually over the next five years, SolarEdge seemed to be a bargain even before this S.M.R.E. deal was announced. Now, with new opportunities to grow even more, and in new directions, I'm even more convinced this is one great renewable-energy stock to watch in January.