Please ensure Javascript is enabled for purposes of website accessibility
Log In Help Join The Motley Fool
Free Article Join Over 1 Million Premium Members And Get More In-Depth Stock Guidance and Research
By Lee Samaha – Updated Apr 17, 2019 at 9:37AM

The industrial conglomerate demonstrated improvement in two areas of concern for investors.

Shares of industrial conglomerate United Technologies (RTX) jumped 10.9% in January, according to data provided by S&P Global Market Intelligence. While the move followed the market and the industrial sector upwards during the month, the stock outperformed the market by a few percentage points after the release of its fourth-quarter earnings report.

As most investors know, United Technologies will split into three different companies. The remaining company will comprise Pratt & Whitney, the legacy United Technologies Aerospace Systems (UTAS), and the newly acquired Rockwell Collins aerospace business, while Otis (elevators) and Carrier (air conditioning, refrigeration, and fire and security products) will be spun off separately. 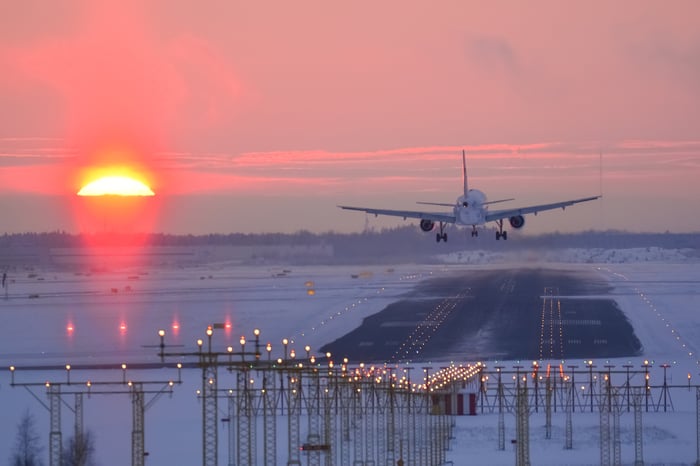 The move has been generally well received by the market, but there are concerns regarding the divergence in performance among the three businesses areas. Specifically, the aerospace businesses have been outperforming while Otis and Carrier have been relatively weaker. The worry is that management will lose focus on the two other businesses as it prepares for the separation in a couple of years.

However, the fourth-quarter earnings showed signs of improvement at both Otis and Carrier.  The former reported the first quarter of year-over-year earnings growth since the third quarter of 2015, with pricing appearing to stabilize in the all-important China elevator market. Meanwhile, there are signs that margin pressure at Carrier could abate in 2019, so the company can leverage its strong equipment orders -- up 8% in 2018 -- into earnings growth.

It's long been felt, by both investors and hedge funds, that the aggregate parts of United Technologies would have a higher value if they were separate rather than fractions of one company. It's a strong argument, but to realize that latent value, management is going to have to execute well with Otis and Carrier in 2019.

Thus, look out for operating margin performance at Carrier and whether Otis can continue to grow earnings. Meanwhile, the aerospace business looks to be on very strong footing and, hopefully, the company can continue the good momentum generated in the fourth quarter well into the rest of 2019.