The alt-wood decking maker delivered a record 2018, but conservative guidance for early 2019 had investors selling. Despite the market's short-term dissatisfaction, management is focused on Trex's long-term potential.

Green-focused decking manufacturer Trex Company (TREX -4.80%) reported fourth-quarter and full-year 2018 results after market close on Feb. 14. When trading started on the next day, some investors raced to sell their shares, sending the stock down as much as 10% in early trading. And while it rebounded a good bit, Trex's stock finished trading down 2.3% on a day that the S&P 500 gained more than 1%.

Trex pretty solidly beat Wall Street analyst expectations for its fourth-quarter results, reporting 15% sales growth and 39% higher earnings per share, making its "weak" stock performance post-earnings a bit of a surprise for many investors. In this case, there's a pretty clear reason why the market's knee-jerk reaction to Trex was to sell: Management's guidance for the first quarter of 2019 set very low expectations. The company is looking for sales to grow only 3% to start the year, and even hinted that margins might not be that great early in the year. 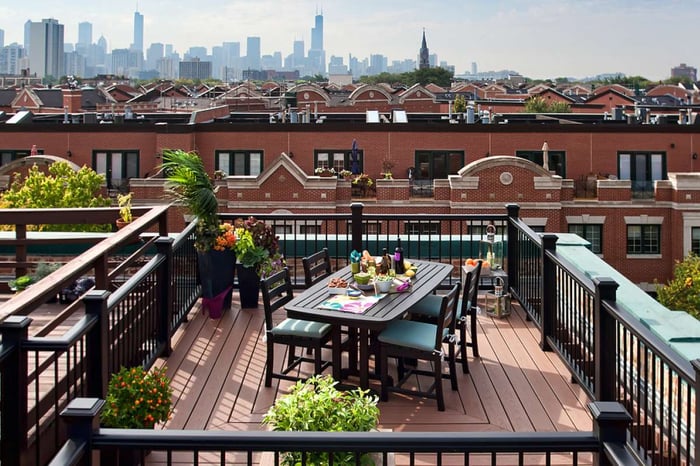 But once you get past the typical short-term thinking that drives Wall Street, Trex's earnings release and management's comments on the earnings call make it clear the company continues to play a far more important game than trying to make investors happy from quarter to quarter: building Trex to dominate the decking business for decades to come.

As a percentage of sales, operating expenses also improved in the quarter. Sales, general, and administrative (SG&A) expense was 19.7% of sales, down from 20.9% in the prior-year period, and that included higher research and development (R&D) spending ahead of the launch of an expanded and improved line of "Trex Enhance" products.

Between the operational improvements, and higher volume and lower input costs for recycled polyethylene that helped drive better gross margins, net income increased 38% to $25 million. Earnings per share were up 39% to $0.43 per share, with the additional boost of share repurchases. 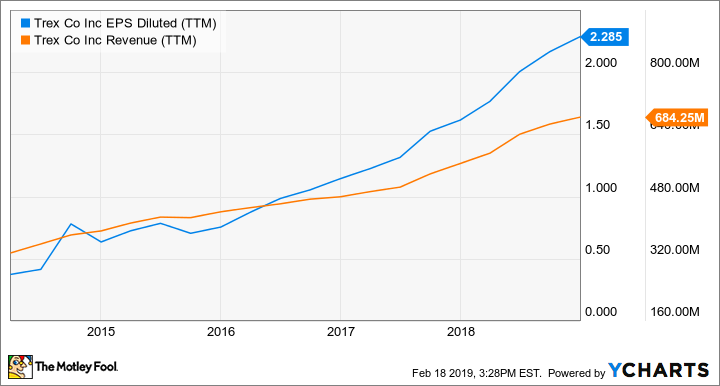 For the full year, sales were up 21% to $684 million, while earnings per share increased 42% to $2.28. Management pointed out that Trex took a $6 million charge in the third quarter related to a major expansion of retail distribution (which is expected to generate substantial incremental sales over the long term), while also seeing a boost in its net earnings related to the lower corporate income tax rate enacted in late 2017.

Lower taxes are nice, but chief financial officer Bryan Fairbanks pointed out on the call that Trex's focus on operating improvements did most of the heavy lifting: "Approximately 75% of this growth was attributed to our strong operating performance, with the remainder due to a lower tax rate of 23.2%, compared to 27.9% in the year-ago quarter."

Getting ready to take another plank from real wood

Even though Trex delivered solid operating results, and SG&A spend as a percentage of revenue fell in the fourth quarter, the company continues to prioritize investments in its long-term strategy to take market share from wood. On the call, CEO Jim Cline described a series of improvements being made to the Trex Enhance product line, which has historically been targeted at the do-it-yourself (DIY) customer. This series has historically been a solid-color product with an attractive price point, but the company invested substantial R&D dollars recently to develop "Enhance Naturals," a multicolored decking that more closely resembles natural wood, at a slightly higher price. 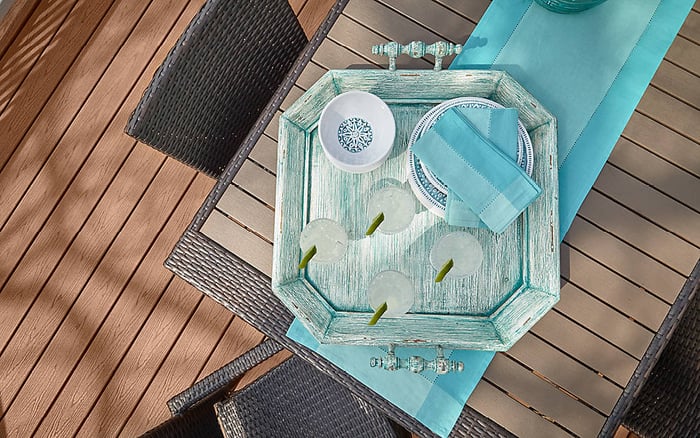 Management is counting on this expanded line of products to help accelerate the company's efforts to take market share from wood. Cline said that "Wood accounts were approximately 83% of the decking in North America, and we estimate that approximately 60% of that market is addressable by our products. We see a significant runway ahead of us."

For some context, Trex currently holds around 7% of North American market share in board-feet of decking sold -- a "significant runway" indeed.

Getting back to what likely had some investors discouraged post-earnings, Trex's guidance for the first quarter of 2019 called for relatively weak sales growth of 3%. Furthermore, Trex is also feeling some margin pinch from the launch of the new Enhance products. On the earnings call, Fairbanks pointed out that there would be some "start-up inefficiencies" related to building up inventory of these new products.

But as we move into the second half of the year, Trex's typical strong operating profile is expected to shine again, driving incremental margins higher, along with the profits on sales growth from these new products. Furthermore, Trex also plans to spend 32% more on capital expenditures in 2019 than last year, or about $11 million, primarily related to expanding capacity and further driving down operating and manufacturing costs.

While the market may have been a bit nonplussed by the near-term outlook, the reasons for it -- management is aimed at the long-term goal of taking share from wood, not making Wall Street happy every quarter -- should be more palatable for long-term investors.