A low price doesn't have to mean a bad investment.

Investors sometimes want to buy low-priced stocks because they can buy more shares, which is why penny stocks often seem attractive. You can control a lot of shares for very little money. Yet you also incur exceptional risk. If you move a bit up the price range and are looking at stocks in the $10-$20 range and want to reduce risk, you'll need to look for companies with strong underlying businesses that carry substantial opportunity. 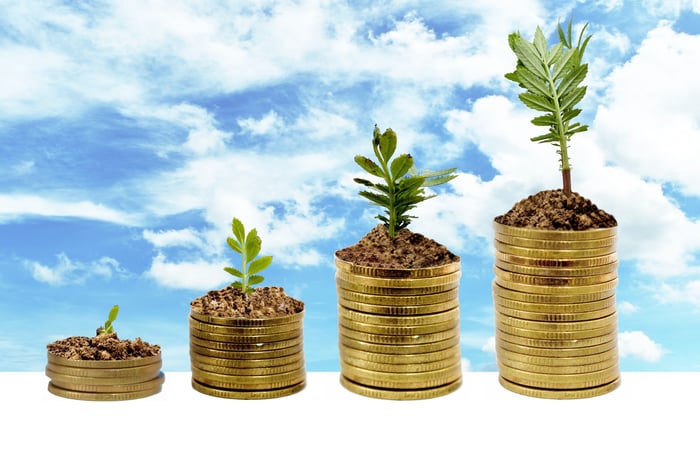 That looks like just the beginning of an exciting growth story. Tencent Music provides more than half of China's online music services today, whether you count by subscribers or by revenues. The market itself is going through an extreme growth spurt at the moment, as total revenues are expected to show fivefold growth over the next five years.

The growth won't come easily, of course. Tencent Music needs to work for it because -- stop me if you've heard this story before -- it's all about converting users from the free, ad-supported model to paid subscriptions. Investors are still getting a grip on the promise and the challenges of Tencent Music's business prospects, and trading has been choppy in these first few months.

So I'm not suggesting that anyone should back up the truck and invest their entire life savings in Tencent Music today. This is a speculative idea with high risk balanced against potentially huge rewards. Even hungrier rivals could emerge and undermine Tencent Music's massive market position at any time, and it's not entirely clear how the company aims to boost the uptake of paid subscription services. Still, a small stake in this emerging growth stock could make sense if you're willing to accept that risk and trust the company's management to pull some aces out of its sleeve.

A low price but a high yield

John Bromels (Kinder Morgan): Natural gas pipeline operator Kinder Morgan's share price took a huge dive back in 2015 after the company announced it needed to cut its dividend by 75% to shore up its balance sheet. Today, the share price is below $20: still less than half what it was back then. But the company has done a good job getting its house in order, and although it still has work to do, it's worth a second look for investors.

The biggest change most investors will notice is that its dividend has started to come creeping back. Kinder Morgan boosted its quarterly payout by 60% in 2018, from $0.125/share to $0.20/share. Right now, that's a yield of about 4.5%, but Kinder isn't through. The company has announced a plan to further increase its dividend by 25% in 2019 and by a further 25% in 2020. If the share price stayed the same, that would amount to about a 7% yield.

But the share price is unlikely to stay put, not with Kinder Morgan moving aggressively to buy back shares. The company repurchased $250 million of stock in 2018, and CEO Steve Kean thinks that the company is undervalued at current prices, an indication that he may keep repurchasing shares in the near future, which would help investors. And the company is performing well operationally, too, exceeding its own 2018 earnings targets despite the double whammy of a major asset sale and collapsing oil prices.

This year, Kinder Morgan looks poised to continue its growth. It expects to improve distributable cash flow by 10%, open a major liquefied natural gas export facility, and complete a major gas pipeline from the Permian Basin to boot. Now is an excellent time to invest in this beaten-down stock that's on its way back up.

A beaten-down stalwart still has potential

Rich Duprey (General Electric): The once-mighty conglomerate General Electric is a shell of its former self, and its stock lost three-quarters of its value last year. Today, shares go for what they were trading at back in 2009, meaning a whole decade's worth of value has been lost.

Yet there is potential for General Electric to grow once more. While it may not attain the same heights it once held (though it's possible it very well could), investors would be better served to see the opportunity for a business that can create value again while not shooting for the stars.

Leading the way will be GE's aviation division. GE has helpfully dispelled the notion that the unit might not be able to maintain its growth trajectory. The division's earnings have the potential to double over the next decade as it benefits from Boeing's 737 Max jet engine business as well as helping Airbus keep its A320 Neo aloft.

While the recent history of GE's power unit has been a drag and will likely continue to be this year, management forecasts an improving picture of profitability. It's not a rosy future management is projecting, rather a sobering one. But it's also one that suggests the worst may be behind it, and the power segment can possibly contribute to the overall health of the company eventually.

GE has a 120-year history of paying a dividend but last year was forced to slash it to a penny to fix the problems the company was plagued with. That accounts in large part for the shape the stock is in, and investors would do well to ignore the payout for the time being.

What you're betting on here is a steadily improving company, one that has finally grounded itself in reality. The picture is ugly now, but an investor looking to the future may just find General Electric is once again a business to grow old with.