The world's information is very quickly moving to the cloud. Cisco predicts that cloud computing workloads will triple between 2016 and 2021, and that 94% of all global workloads will be processed by cloud data centers by 2021.

Talend (NASDAQ:TLND) is helping businesses make sense of all of that cloud-based information. Its Data Fabric platform allows companies to pull data from multiple software applications into a single data lake, then use other analytics and presentation providers to better understand it.

Think of it as a data collection pond, where companies can go fishing for insights. Data scientists, who experts believe spend 80% of their time pulling and preparing data into a useful format, are some of Talend's most interested anglers. They can be significantly more efficient by using the Data Fabric platform. 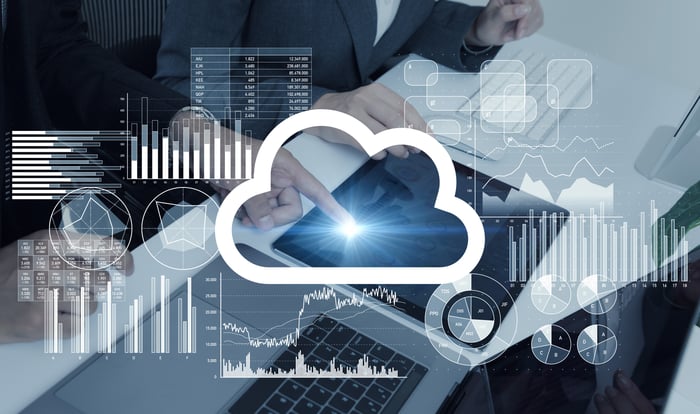 Data source: Talend. *Revenue in Q4 2018 benefits from the new revenue regulation standard IFRS 15, which went into effect on Jan. 1, 2018. **Adjusted earnings per share excludes stock-based compensation and the amortization of intangible assets.

As a reminder, Talend adopted the new IFRS 15 standard (the international equivalent of the United States' ASC 606) in 2018, which recognizes revenue and cash flow based upon fulfilling performance obligations. This includes immediately recognizing 10% of ratable software sales up front, which somewhat inflates the company's reported revenue. For the fourth quarter of 2018, Talend's management team estimates that the IFRS 15 contributed a "tailwind" of approximately 5% net benefit to revenue growth. Talend's fourth-quarter 2017 results were reported under the previous standard.

As we scale our business, we are increasingly focused on the cloud opportunity and have expanded our go to market capabilities with the addition of a self-service, frictionless channel to land new cloud customers. We believe we are entering 2019 well positioned to capture an increasing share of the data integration market.

Talend has quite a large market opportunity to grow into. IDC predicts the market for cloud data integration and integrity software will grow 30% per year and reach $2.3 billion by 2022. Talend had $200 million of total annual revenue last year, which represented roughly a quarter of its addressable market. The company has captured a significant share already, but still has plenty of room to expand in a market that is also growing quickly. Last quarter's acquisition of Stitch shows that it's also willing to invest in acquisitions to expand its presence.

However, the company also faces several challenges. First and foremost, it will need to find a new sales leader after VP of Worldwide Sales Brad Stratton abruptly and unexpectedly resigned in January. Its cloud-based offerings (which bring in less revenue up front) are increasingly forming a larger share of its sales, and are replacing its more profitable on-premise deployments such as Hadoop. And management expects foreign exchange rates to work against the company in the upcoming year.

All of these challenges have led management to guide for only $250 million of revenue in fiscal 2019, which would mark approximately 25% growth. That forecast would be significantly lower than the company's 34% growth rate in 2018, or its 40% growth in 2017.

While it's possible that management is just being conservative in its estimate, investors should be aware that Talend's cloud-based sales are to some extent cannibalizing its more profitable on-premise deployments.