Please ensure Javascript is enabled for purposes of website accessibility
Log In Help Join The Motley Fool
Free Article Join Over 1 Million Premium Members And Get More In-Depth Stock Guidance and Research
By Harsh Chauhan - Updated Apr 17, 2019 at 10:30AM

Don't be surprised at the winner of this showdown.

NVIDIA (NVDA 5.92%) and Cypress Semiconductor (CY) have enjoyed vastly different fortunes on the market because of the nature of their businesses. While one of them has hogged the stock market's attention thanks to its leading position in graphics cards and foray into emerging technology such as artificial intelligence, the other has taken a more discreet approach toward growing its business.

NVIDIA is known for supplying graphics cards that are used for PC gaming, self-driving cars, and artificial intelligence applications in data centers, while Cypress' connectivity chips are used in applications such as consumer, automotive, and industrial, among others. As NVIDIA dominates its end markets, it has managed to clock impressive growth for a long time when compared to Cypress. 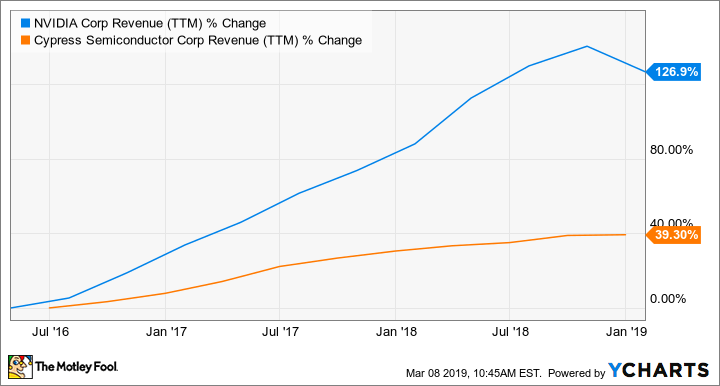 However, the tables have turned in recent quarters. NVIDIA has run into trouble as demand for its GPUs (graphics processing units) has waned, while Cypress has managed to keep things steady despite the uncertain semiconductor demand environment. Does this make Cypress a better bet as compared to NVIDIA? The secret to Cypress' steady growth is the Cypress 3.0 strategy, which involves going after those semiconductor niches that are growing at a faster pace than the overall industry. While this approach hasn't led to fashionable growth like NVIDIA has witnessed, it has ensured higher profitability.

Consider this: Cypress' gross margin has increased 1,080 basis points since the 3.0 strategy came into effect in 2016. What's more, the company believes that it can touch a 50% gross margin level in the long run as compared to the last reported quarter's 47.8%.

Cypress' handsome margin gains are a result of its early move into markets with solid growth potential, which allows it to sell its chips at a premium. For instance, the company controls over a third of the burgeoning USB-C market, having struck relationships with the top five PC manufacturers. Demand for USB-C chips is expected to increase big time in the future, touching 5 billion units by 2021 as compared to 300 million in 2015.

Cypress looks well-placed to tap this market, which bodes well for the company's consumer business, which supplies a quarter of its total revenue. The automotive business is yet another big growth driver for the company thanks to its Wi-Fi-Bluetooth combo chips and microcontrollers.

Cypress says it saw a 24% increase in design-win activity last year, and 37% of those wins were attributable to new products launched by the company. Such developments indicate that the company is setting itself up for long-term growth, which is why investors didn't panic when the company issued muted guidance for the current quarter.

The company has been pulling the right strings by tapping lucrative markets, and it should be able to get its top-line growth back on track once the end-market environment improves.

Check out the latest earnings call transcripts for NVIDIA and Cypress Semiconductor.

NVIDIA's fall from grace has been spectacular, to say the least, and the latest guidance indicates that the tough times will continue.

NVIDIA's revenue was down 24% last quarter, and its net income was slashed in half. Cypress was in a much better position with a slight revenue bump and a 25% increase in adjusted earnings. The GPU specialist anticipates a 31% annual drop in the revenue in the current fiscal quarter.

Additionally, NVIDIA expects no revenue growth for the full year, which provides an indication of possible erosion in its graphics card market share as Advanced Micro Devices (AMD 3.67%), NVIDIA's prime rival, expects to deliver revenue growth in the high single digits. This seems quite possible given that AMD now enjoys a technology lead over NVIDIA in the GPU space and is offering powerful graphics cards at competitive prices.

AMD is on track to refresh its entire GPU line-up based on the advanced 7-nanometer manufacturing process. This gives AMD a one-year product lead over NVIDIA as the latter's 7nm cards are expected sometime in 2020.

NVIDIA faces a lot of headwinds and is merely a shadow of its former self.

A closer look at the valuations of both companies will make it clear that Cypress is the better bet. 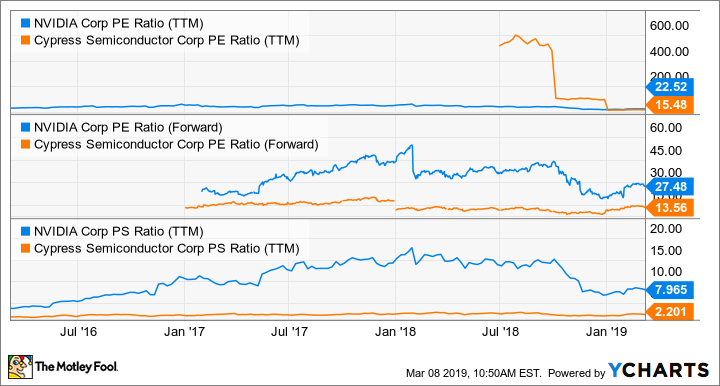 Cypress also carries a solid dividend yield of 2.85%, compared to NVIDIA's paltry yield of just 0.41%. This gives investors yet another reason to avoid the graphics card specialist and put their money in Cypress.