Please ensure Javascript is enabled for purposes of website accessibility
Log In Help Join The Motley Fool
Free Article Join Over 1 Million Premium Members And Get More In-Depth Stock Guidance and Research
By Scott Levine - May 17, 2019 at 9:16AM

It was hardly an electric start to the new year for this fuel-cell solutions specialist.

A leader in fuel-cell solutions, Ballard Power Systems (BLDP -2.29%) recently released its first-quarter earnings. Failing to meet analysts' expectations, Ballard reported revenue of $16 million; however, it met expectations on the bottom line, reporting a $0.04 loss per share. Since the company's first quarter is a lot more complicated than what happened on the top and bottom lines, let's take a closer look at the figures from the financial report to gain greater insight.

1. Revenue leaves little to feel charged up about

In the first quarter of 2019, Ballard reported $16 million in sales, representing a 20% decline from the $20 million the company reported during the same period last year. While Ballard reported year-over-year declines of 72% and 94% in the heavy-duty motive and portable power businesses, respectively, the company achieved growth in other areas. Material handling revenue, for example, rose 676% year over year, thanks primarily to higher stack shipments to Plug Power. Moreover, backup power and technology solutions revenues rose 43% and 25%, respectively, year over year. 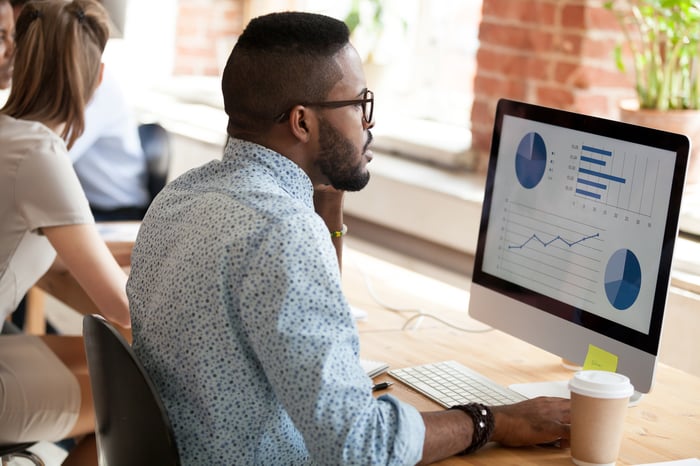 Despite the lower-than-expected sales, management maintained its revenue guidance for the year: $97 million. While investors may be skeptical of the forecast considering the steep year-over-year decline, management says it expects to realize $60 million of the $76 million in its 12-month order backlog in the last three quarters of 2019.

A waning top line wasn't the only source of soreness for investors last quarter, as Ballard's shrinking margins added to the sense of woe. Whereas Ballard generated a 33% gross margin in Q1 2018, it reported a 14% gross margin in the recently completed quarter. Besides the lack of higher-margin membrane electrode assembly shipments to its joint venture with Guangdong Synergy in the quarter, Ballard's gross margin suffered from the absence of higher-margin revenues generated by Protonex due to the disposition of power manager assets last October.

Looking farther down the income statement provided an additional cause for concern. Ballard experienced year-over-year contraction regarding its operating margin from negative 30% in Q1 2018 to negative 53% in Q1 2019.

Despite Ballard's slimmer 14% gross margin in the first quarter, management believes that the rest of the year looks brighter. On the conference call, Tony Guglielmin, Ballard's CFO, suggested that the gross margin will "improve throughout the year as the Ballard JV Technology Solution program continues to ramp up along with increases in product revenues that will impact overhead absorption as well as the impact of margin on product mix." Ballard, consequently, forecasts a 2019 gross margin in the mid-20% range.

3. Checking in with China

Since 2015, Ballard has worked to expand its presence in the Middle Kingdom. As of yet, the country has failed to prove its worth as a lucrative opportunity. However, the partnership with Weichai Power has provided investors with a reason to be excited. At the end of Q1 2019, Ballard had an order backlog of $188.4 million -- a noticeable 18% drop from the $222 million in backlog that the company had at the same time last year.

But subsequent to the end of the quarter, Ballard announced that it had received a $44 million order from the Weichai-Ballard joint venture. According to management, commissioning of the manufacturing facility that will provide the modules, stacks, and other parts for the order will begin late this year, and it will be fully commissioned early in 2020.

While Ballard experienced a setback in its joint venture with Guangdong Synergy last year, the endeavor with Weichai Power is proving to be more successful. Indicating how the partnership appears on track, Weichai, consistent with the terms of its deal, finalized its two appointments to Ballard's board of directors earlier in January. Moreover, Ballard estimates that revenue from the joint venture will play a significant role in helping the company to achieve its sales forecast for 2019.

While some investors may find solace in the fact that management reaffirmed revenue guidance for 2019 even though Q1 sales were lower than expected, it's concerning that the company seems to be relying so heavily on the deal with Weichai. The year-over-year drop in Ballard's backlog, in and of itself, shouldn't have investors reaching for the red flag, but it seems that Weichai will represent a considerable portion of the company's revenue in the future, posing a greater degree of risk for Ballard. And with Ballard's firsthand experience of how joint ventures with China-based partners have the potential to hit bumps in the road, maybe investors will want to locate their red flags -- just in case.