This list includes one bright, shining space stock that you may already be able to invest in.

2019 is "the year for space," says Morgan Stanley. Globally, the nascent space industry is worth about $350 billion in total annual sales, argues the investment banker -- and could grow as big as $1.75 trillion by 2040.

Already, smart money is pouring in. The investment group Space Angels estimates that $1.7 billion in private capital was invested in space companies in the first quarter of 2019 alone -- nearly twice the sum invested in the fourth quarter of 2018 (in other words, 100% sequential growth).

SpaceX, Blue Origin, and OneWeb (to name just a few) are each working to put "constellations" of thousands of satellites in orbit to facilitate communication and broadband internet on Earth. Companies both large (Boeing, SpaceX) and small (Virgin Galactic, Blue Origin) are developing human-rated spacecraft that could soon return American astronauts to the International Space Station from U.S. territory, carry paying space tourists past the Karman Line -- or both.

With so many companies striving for the same goal, Space Angels declares that 2019 "will most certainly be the year of commercial space travel." 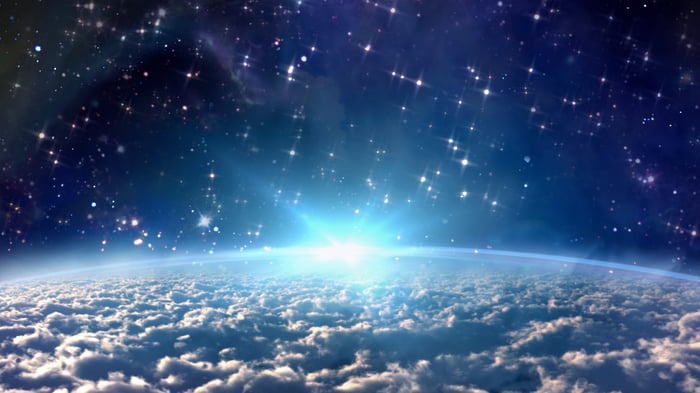 Unknown to most individual investors, Space Angels bills itself as "the perfect platform" for high-net-worth angel investors to "make a 30x return" by investing in "the best early-stage space ventures on (or off) the planet."

Importantly, this means that most of the companies that Space Angels identifies will not be stocks that you can invest in today. But they very well could become companies that you will be able (and might want) to invest in a few years from now -- and thus are worth watching.

Space Angels' list of current and past picks already reads like a who's who of the private space industry, featuring names from SpaceX to Made in Space to Vector Space Systems and Planet Labs. And in its recent Q1 2019 "Space Investment Quarterly" report, Space Angels adds 10 names to that list -- many of which you might not have heard of. (At least eight of these names are new to me.)

Some other names you need to know

So let's get to know them, shall we? According to Space Angels' research, the following companies have received the most private investment year to date. In order from most to least, they include:

Now, I've written extensively about both OneWeb and SpaceX. I'll pause and give you a chance to read up on those if you haven't already....

Ready? Okay, then. Here's what we know about the rest of these companies.

The largest of these small space companies that we don't yet know much about, Tarana Wireless is a broadband infrastructure developer backed by both OneWeb's founder Greg Wyler, and now EchoStar as well. Investments from other backers, including AT&T and Deutsche Telekom, bring this company's total funding to $200 million. Its specialty is "beamforming" technology, which permits long-distance wireless internet signals to travel unimpeded around objects that would otherwise block the beam.

A communications satellite operator, Swarm Technologies aims to provide "affordable connectivity ... to people and devices in remote regions." The company is only three years old, but already has seven satellites in orbit, and more on the way. The company targets customers in the maritime shipping, agriculture, energy, and ground transportation industries.

Backed by Boeing, Isotropic Systems is developing modular antenna systems for satellite communications, as well as user modems for communications between Earth and satellites, and communications terminals that cost as little as $300. The company was founded in 2013, but is still a few years away from bringing its first product to market.

Similar in focus to Swarm, Mynaric aims to bring "ultra-high data rates, license-free and 100% secure wireless communication across vast distances" to the "half the world [that] has no access to the internet" presently. Instead of using radio waves for communications, however, Mynaric's technology employs laser beams (think fiber optics, but without the fiber-optic cables). Not yet public in the U.S., Mynaric did float stock in 2017 on the Frankfurt Boerse, in Germany. (So depending on your broker, this is one you may be able to invest in today.)

CesiumAstro, in contrast, more resembles Isotropic Systems -- a start-up builder of advanced "phased array" antennas and communications systems for satellites. With backing from Airbus, Honeywell, and Analog Devices, it's attracted more, and more varied, interest from industry investors than many other of the companies discussed so far. And Cesium also has customers -- including the Defense Advanced Research Projects Agency, NASA, the U.S. Navy, the U.S. Missile Defense Agency, and Northrop Grumman.

Fremont, California-based Kolmostar's claim to fame is that it's developing algorithms to enhance the efficiency of devices using GPS for position location. According to the company, Kolmostar's tech can reduce power consumption by Internet of Things devices by "100x." Since Space Angels' report came out, Kolmostar has also received additional investment from Momenta Ventures.

In contrast to the many companies focusing on satellite communications from space, HyperSciences' aim is to get to space -- faster -- based on expertise it gained in, of all things, the mining industry. HyperSciences believes that rather than build rockets with multiple stages, the best way to reach orbit is to get there very fast, by blasting off rockets at supersonic speeds -- as fast as Mach 5. Whether or not this is practicable when launching delicate electronics payloads to orbit (much less humans) remains to be seen, but there's an outside chance HyperSciences could succeed in an area that it hasn't even targeted -- hypersonic missiles for defense.

(For that reason, I'd put a pin in this one as a potential acquisition candidate by Boeing or Lockheed Martin).

Last but not least, we come to ZeroG Lab. This is a second Chinese start-up on Space Angels' list. ZeroG Lab hasn't given many details about its business -- only that it supplies satellite components, and that it focuses on the high-growth segments of nanosatellites and microsatellites.

Nonetheless, a journey of a thousand miles begins with a single step. By introducing these companies to you today, I hope I've at least put them on your radar, so you can continue following their progress -- all the way to eventually perhaps going public.

And don't worry: As soon as I hear more about these space start-ups, you'll be the first to know.