Memorial Day marks the unofficial start of summer, and while most schools aren't out yet, the three-day weekend does mean that plenty of us will take the opportunity to get away: Spending on gas was 35% higher on the holiday last year than on an average day, according to aggregated data from over 50 million Bank of America credit and debit cards that bank the shared with The Motley Fool.

"Memorial Day weekend tends to bring Americans together to celebrate with friends and family," said Bank of America credit card executive Jason Gaughan. "Whether consumers splurged for backyard barbecues or took the long weekend to get out of town, we often see spending hikes above the average day across travel, food, and beverage, and entertainment categories." 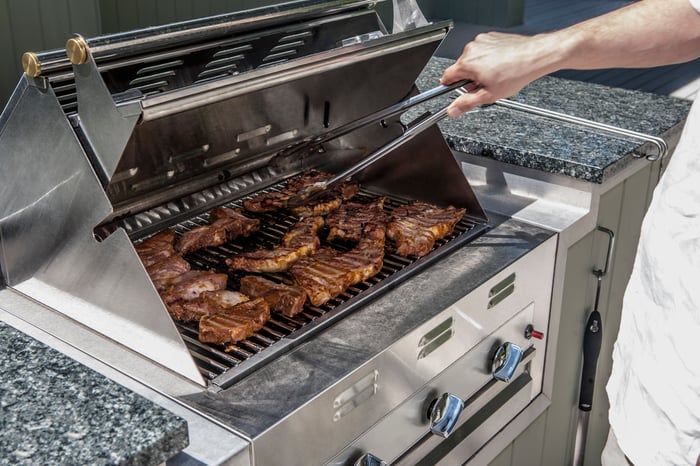 Americans spent an average of $48 on gas throughout the 2018 Memorial Day weekend -- an increase from $41 the previous year. Travelers also spent more on hotels, in particular on the holiday itself. Total hotel spending on that Monday was 37% higher than the average day in 2018 -- and higher than the other days of the holiday weekend.

Of course, people don't just travel for this holiday to visit friends and family. They also take advantage of the warmer weather to get outside and enjoy amusement parks, carnivals and other tourist attractions:

But most of all, Memorial Day weekend features gatherings around the grill. And all that barbecuing leads to a notable increase in spending at grocery stores.

Not every celebration took place at home or at least not everyone finishes there. Spending at bars, lounges, and nightclubs nearly doubled (83%) the average day in 2018 on Saturday, May 26.

Summer is here -- maybe not technically, but psychologically -- and that deserves a celebration. However, that's not an excuse to  spend money you don't have.

This is certainly a holiday that can be enjoyed while staying within a sensible budget. Beaches are generally free to visit. Barbecues can be just as fun when you're grilling hamburgers as when you break out the steaks.

So examine your finances before setting your plans in stone. It's awesome to get away, whether its a quick trip to fancy resort, an amusement park, or something in between. And hosting a cookout with a top-shelf spread has its own joys. But if doing that means you'll be stuck remembering the fun as you look at the lingering credit card balance it left behind come Labor Day -- or worse, Thanksgiving -- make different choices.

We've got a long summer of fun times ahead of us. Budget accordingly.