Shares of Kraft Heinz (NASDAQ:KHC) traded down more than 5% on Tuesday afternoon, hitting a new all-time low. It was a poor day on Wall Street for a lot of consumer staples, but Kraft Heinz continues to stand out for all of the wrong reasons.

Kraft Heinz had no company-specific news released on Tuesday, but seemed to be caught in a downdraft that also saw shares of Mondelez International, J.M. Smucker, Kellogg, and Campbell Soup all trading lower. 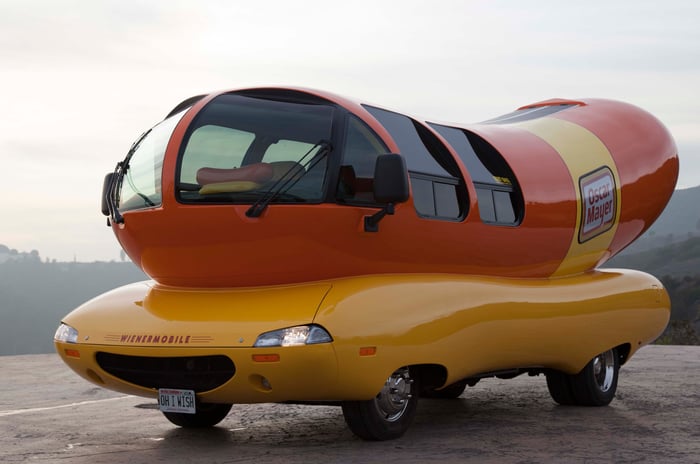 Oscar Mayer is one of many Kraft Heinz brands that need to be sorted. Image source: Kraft Heinz.

Demand for the packaged-food brands sold by all these companies has been on the wane in recent years. Kraft Heinz has also been caught up in accounting snafus and other issues that have led to a management overhaul.

The new CEO, Miguel Patricio, has his work cut out for him as he tries to spark growth and prune the portfolio, all while managing a $30 billion debt load stemming from the 2013 takeover of Heinz by 3G Capital and Berkshire Hathaway.

Kraft Heinz is a good reminder that just because a stock is falling doesn't mean it's a bargain. As my fellow Fool Leo Sun has noted, Patricio's former employer Anheuser-Busch InBev cut its dividend to pay down debt, a strategy the CEO might consider at his new job since Kraft Heinz spent more than 100% of its free cash flow on dividends.

It's hard to say how much further Kraft Heinz will fall. But given the challenges the company faces, it seems unlikely the stock will be an outperformer anytime in the near future.