The excited market today has led to some excited trading after closing. Near the top of the "most-traded after-hours list" is salesforce.com (NYSE:CRM), which released an earnings report that satisfied many investors. On the opposite site of the pleasing scale is Skyworks Solutions (NASDAQ:SWKS) -- the company is facing an uncertain immediate future due to events outside of its control.

Finally, TiVo (NASDAQ:TIVO) got some much-needed good news in its dispute with Comcast (NASDAQ:CMCSA) thanks to The Law. Let's call the court to order and take that case first... 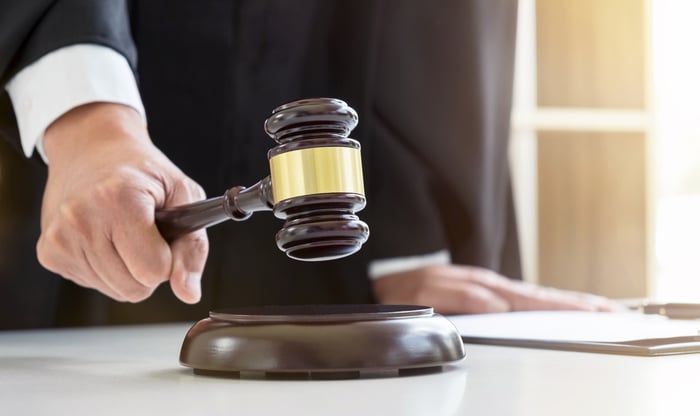 TiVo wins a round against Comcast

There's nothing like a legal victory to breathe new life into a stock. TiVo shares are up nearly 10% in night trading following the company's announcement that it had bested big media's Comcast in that arena.

According to TiVo, it received from the U.S. International Trade Commission (ITC), a branch of the federal government that has the authority to make certain rulings in trade and business disputes, "a favorable determination... that Comcast's X1 entertainment platform infringes Rovi's patents." Rovi, a provider of data for on-screen TV program guides, is a key TiVo asset.

TiVo and Comcast have been fighting in court for several years over patents. The original suit was filed in 2016, alleging that Comcast infringed Rovi patents with X1's feature set. In November 2017, the ITC determined that two of Rovi's patents for "remote record" technology had been infringed by Comcast. Comcast subsequently had to remove the function from its equipment.

Comcast has not yet responded publicly to the ITC ruling, but it doesn't seem as if the market's too concerned -- the company's stock is actually up slightly in after-market action.

Due to the current trade dispute between China and the U.S., Skyworks has reduced its estimate for its current Q3 of fiscal 2019.

It now believes it will book revenue of $755 million to $775 million, with adjusted per-share net profit coming in at $1.34 at the midpoint of that top-line range. Both projections are some way down from the former ones, which were $815 million to $835 million, and $1.50, respectively.

Skyworks supplies hardware components to Chinese tech giant Huawei, which is dead center in the middle of the Chinese-U.S. trade war. Huawei is responsible for roughly 12% of total Skyworks sales.

Although the market isn't collectively happy about this, it isn't taking it too badly in post-close trading. The stock price is currently down only marginally tonight.

Talk about a convincing earnings beat. Customer relationship management (CRM) mainstay Salesforce reported Q1 of 2020 results after the market's closing bell, and these were particularly impressive on the bottom line.

For the period, Salesforce took in revenue of $3.74 billion, 24% higher than in the same period of fiscal 2019. This was above the average $3.68 billion expected by analysts. The company's adjusted net profit was $739 million ($0.93 per share). Not only did that represent a 33% improvement, it was far above the $0.61 earnings per share figure analysts had been modeling.

Salesforce attributed the growth to its expansion into other business segments besides sales, among other factors.

Adding to the positive news, the company increased its profitability guidance for the entirety of fiscal 2020. It is maintaining its projection of $16.10 billion to $16.25 billion on the top line, but has upped that for adjusted EPS, to between $2.88 and $2.90. The average analyst estimates come in at $16.12 billion for revenue and $2.66 for EPS.

In post-market trading, Salesforce's shares are up by nearly 3% at the moment.