Home affordability relies on cheap financing, and that's back in a big way.

The housing market has made big strides forward over the past decade since the financial crisis, recovering from its historic declines in the mid-2000s and seeing big gains in average home prices in many popular markets across the nation. Yet the rise in prices combined with rapidly increasing mortgage rates over the past couple of years made housing far less affordable, especially in pricier areas of the country.

However, all that might be changing. Interest rates on 30-year mortgages fell to 3.82% on June 7, continuing a trend that has seen rates plunge by more than a full percentage point since last November. The current figure is the lowest level for the 30-year mortgage since September 2017, and the weekly move was a sharp drop from 3.99% the week before. The movements in interest rates reflected the big changes in market sentiment with respect to the expected future course of monetary policy from the Federal Reserve. 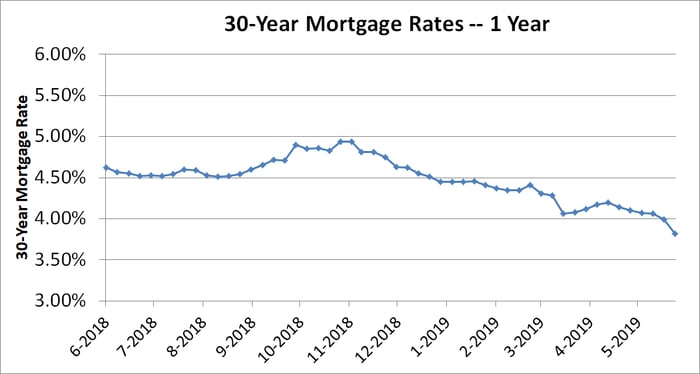 The Fed doesn't directly control mortgage rates for the most part, as its most important lever for influencing the bond market is through its control of short-term interest rates. Yet the bond market pays close attention to the central bank's decisions, and with an abrupt shift in strategy that's appeared in the past several months, bond investors have had to adjust accordingly. In particular, whereas most bond investors previously expected the rate increases that the Fed has implemented over the past two years to continue throughout 2019, they now see a greater likelihood of interest rate cuts in the near future in response to weakening economic activity.

Falling mortgage rates make it cheaper for would-be homebuyers to finance their purchases. For instance, a $300,000 30-year mortgage at the current rate of 3.82% would have a monthly payment of around $1,400, compared to the $1,600 monthly payment for a similar mortgage at the 4.94% rate that was available in November. Put another way, someone who can afford a $1,600 monthly payment could borrow about $42,000 more now than they could seven months ago. That could spur more home purchases and help give the economy an extra boost heading into the key summer season.