Infrastructure companies can provide a great foundation for any portfolio.

Infrastructure stocks won't come up in many growth conversations, but the companies providing pipelines, electrical transmission and distribution, and products to make roads can be stable additions for any portfolio. And they may even give investors a good dividend.

We asked three of our contributors for their top infrastructure picks, and Targa Resources (TRGP 0.69%), Caterpillar (CAT 1.91%), and Brookfield Infrastructure Partners (BIP 0.51%) made the list. Here's why. 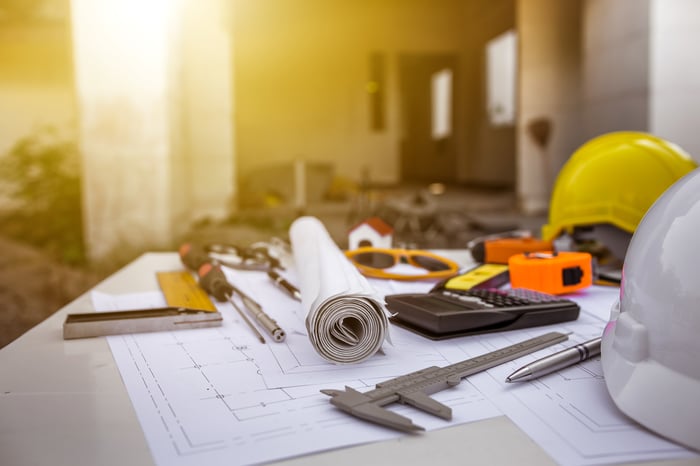 Big-time growth is coming down the pipeline

Matt DiLallo (Targa Resources): Oil and gas companies in the U.S. are growing their production at a blistering pace. That's fueling the need for new midstream infrastructure to transport, process, and store this output, which is allowing companies like Targa Resources to make needle-moving investments to expand their footprints.

The company currently expects to spend $2.3 billion on expanding its infrastructure this year and at least another $1.8 billion in the 2020 to 2021 timeframe. These investments include large-scale pipelines such as Grand Prix, which will move natural gas liquids (NGLs) from the fast-growing Permian Basin and STACK/SCOOP regions to processing complexes and market centers near the Gulf Coast.

These investments not only provide much-needed infrastructure to support the expansion efforts of U.S. oil and gas production, but they should fuel significant earnings growth for Targa Resources. In the company's estimation, its earnings are on track to expand from $1.37 billion last year to as much as $2.5 billion by 2021 as these assets enter service. That high-octane growth rate has the potential to richly reward Targa's investors.

However, Targa Resources isn't without risk since it has a tight financial profile. Because of that, the company has had to get creative in funding construction projects by selling assets and signing joint ventures so it could maintain its high-yielding dividend. Those moves could pay off since the company is on track to deliver big-time growth in the coming years. That upside potential makes it a compelling infrastructure stock to put on your watchlist this month.

Rich Smith (Caterpillar): "Building better" is Caterpillar's tag line, and it's true: If you want to do an infrastructure project in America -- or anywhere -- it's hard to make that happen without involving Caterpillar's portfolio of drillers, excavators, dozers, graders, telehandlers, and other powerful construction equipment.

What makes Caterpillar stock an interesting one to watch, though, can be boiled down to just one word: valuation.

With its stock down 22% over the past year over concerns about a housing slowdown, and a trade war with China, Caterpillar stock in June is trading for a historically low multiple to earnings: 11.4 times trailing earnings, to be precise. And to put that number in context, over the past five years (even excluding the outlier year 2017, when Caterpillar was hit by both a large restructuring charge and a massive tax hit from tax reform), Caterpillar's average low point valuation on its stock was 12.9 times trailing earnings.

At 11.4 times earnings, with a projected 11.3% long-term earnings growth rate (according to S&P Global Market Intelligence) and a generous 3.4% dividend yield, I think Caterpillar is a great infrastructure stock to watch in June.

The combination of assets allows Brookfield Infrastructure Partners to acquire assets that have a high return and sell assets when returns fall, known as recycling capital. Combined with the regular cash flow from operations, this has allowed the company to grow distribution per unit from $0.71 in 2009 to $2.01 in 2019.

Long term, management aims to generate a return of 12% to 15% on equity and grow the dividend 5% to 9% per year. That's a very sustainable baseline of growth that can be driven by organic acquisitions, recycling capital, or issuing new capital that then funds new projects. Brookfield Asset Management, which controls Brookfield Infrastructure Partners, also has a long history of generating solid returns in infrastructure and energy, and that's a big reason this is my pick for infrastructure today.

Building a portfolio with infrastructure

There are a lot of companies building the infrastructure we use everyday, but they aren't very visible to consumers or investors. Targa, Caterpillar, and Brookfield Infrastructure Partners are three examples of great ways investors can buy into billions of infrastructure investment each year, and it's why they're our top stocks today.