MoviePass is (all but) dead. The company's latest attempt at a "new strategic direction" appears to have flopped, with Variety reporting that subscriber rolls have plummeted from more than 3 million members to maybe 225,000 as of April (and maybe even fewer since then).

So what options does that leave for moviegoers, hoping to gorge on all-you-can eat cinema -- but avoid paying full price to enter the cafeteria? 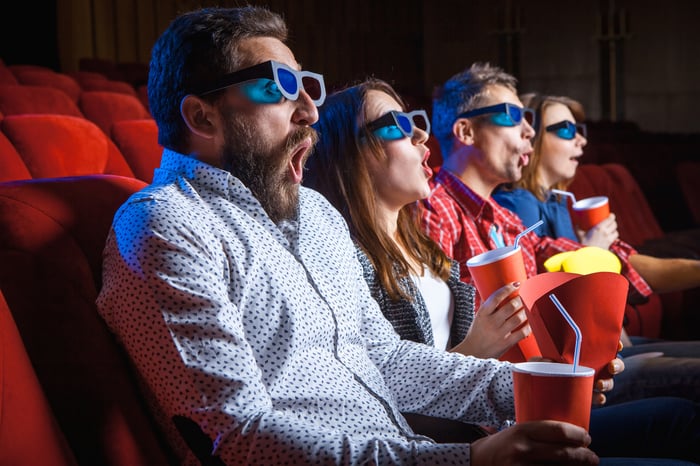 For the last several weeks, AMC Entertainment (NYSE:AMC) and its "Stubs A-List" subscription service have been pretty much the only game in town. Priced at $20 and up, AMC has picked up nearly a million erstwhile MoviePass subscribers (860,000, to be precise) with its offer to see three movies a week.

There's also Cinemark (NYSE:CNK), still offering its $9 "subscription" entitling members to one movie per month, but that's hardly a bargain.

Still, one name was missing from this list: Regal Entertainment -- and its British parent company, Cineworld Group (LSE:CINE). Last year, I predicted that in order to not lose a significant portion of its audience to its larger rival AMC, industry No. 2 Regal would have to institute a U.S. subscription program of its own.

And now we learn that Regal is going to do just that.

Deadline has the story

As Deadline reported just yesterday, "sources confirm" that Regal is preparing to unveil its own subscription service as early as the end of this month.

Details are apparently still being negotiated between America's Regal and its British overlords, but rumor has it that Regal will be trying to slightly underprice AMC (perhaps hoping to make up for lost time by poaching some of AMC's customers). Price tiers of $18, $21, and $24 per month are being considered, varying from city to city. As an added advantage for the truly movie-famished, Regal is said to be set to offer unlimited movies per month, a step up form AMC's three-movies-per-week maximum.

Now, of course, there are strings attached. To get the advertised prices, Regal may require members to sign up for an entire year in advance, versus AMC's month-to-month membership. It's also not clear whether "Regal Unlimited" will include access to such enhanced movie experiences as IMAX.

Whether these caveats will cause Regal Unlimited to stumble in its rollout remains to be seen. For example, charging an up-front $216 for admission to the program may scare off short-on-cash teenagers. It may also raise uncomfortable memories for folks previously burned by buying into pre-paid annual subscriptions at MoviePass and Sinemia.

That being said, I think Regal is playing this smart. As Deadline notes, Regal has taken its time thinking this plan through, hoping to avoid the pitfalls that sank MoviePass and Sinemia. Regal's rumored prices, slightly more attractive than what AMC is offering, are one arrow in the company's marketing quiver. Having the ability to advertise its program as "really" unlimited, in contrast to AMC's being only pretty unlimited, are another.

And of course, there's a business rationale to getting customers to commit to a year's subscription in advance. Locked into the system, movie fans won't be able to easily switch to an AMC subscription after giving Regal a try -- or more dangerous still, bop back and forth between the two chains, taking advantage of one company's promotions one month and then jumping ship to sign up for another promotion at the competition the next month.

Additionally, subscriptions paid a year in advance to Regal will become in essence a big pool of "free float" that Cineworld can use as it wishes -- even if it simply wishes to deposit the cash and earn interest -- a benefit AMC will not have access to from one monthly billing cycle to the next. This could be the advantage Regal is counting upon to permit it to underprice its rival.

In this regard, it's important to note that even during its brief period as the only game in town, AMC with its a-List program wasn't able to earn a profit last quarter -- S&P Global Market Intelligence reports that it lost $130 million instead.

By choosing to go the annual subscription route, Regal and Cineworld may hopefully avoid that fate. If that makes their program more viable, and ensures Regal is able to continue offering all-you-can-eat movie subscriptions where so many of its competitors have already failed, it will be good news for Cineworld shareholders and movie consumers alike.