Is there anything Google can't do?

From internet advertising to search to finding you a good deal on a plane ticket to Jamaica, Google -- and its parent company Alphabet (NASDAQ:GOOG) (NASDAQ:GOOGL) -- have remade the internet in their image. Google's ventures even extend into the high-tech physical world, testing driverless cars, laying fiber to make gigabit internet a reality on the ground, and operating satellites in orbit around the Earth.

One thing Alphabet can't do, though -- at least not yet -- is launch those satellites into orbit on its own. For that, Alphabet invests in other companies. 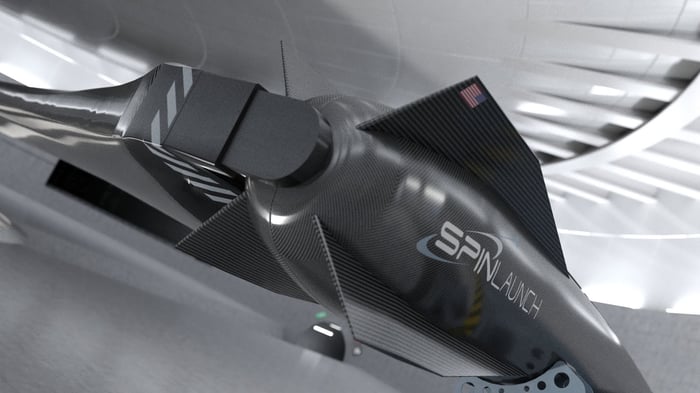 Buying a stake in space launch

For instance, Google won itself a lot of headlines when, in early 2015, the company teamed up with Fidelity to invest $1 billion in Elon Musk's SpaceX -- a 10% stake that's more than tripled in value since.

And no wonder SpaceX has gone up. Since its founding less than 20 years ago, SpaceX's business of drastically lowering launch costs, and landing and reusing rockets to lower costs further, has won it a sizable chunk of the international launch market. (Last year, for example, SpaceX launched 21 rockets -- even more than Russia). The next few years could see SpaceX launch many more times, as it builds a global constellation of broadband internet satellites that promises to spread internet connectivity to all corners of the globe -- benefiting Alphabet's business in the process.

But even that may not be enough to satisfy Alphabet -- which is where SpinLaunch comes in.

Within the satellite industry, demand is growing for one class of satellites in particular: small ones, the kind that don't necessarily need an entire Atlas V or Falcon 9 rocket to put them in orbit. Last month, we learned that the U.S. Department of Defense's Defense Innovation Unit (DIU) had awarded a "launch prototype contract" to a newish start-up by the name of SpinLaunch, which aims to service this need for a cheap way to put small satellites in orbit.

We don't yet know how much the contract is worth -- but we do know who stands to benefit.

Combined, these three companies have contributed 83% of all the money SpinLaunch has raised to finance its business to date.

Spinning their way into orbit

How exactly does SpinLaunch differ from other space launch companies?

In contrast to traditional launchers such as SpaceX and United Launch Alliance, which load a satellite aboard a rocket, "light that candle," and blast into orbit -- and to companies like Northrop Grumman and Virgin Orbit, which fly airplanes to high altitude and launch rockets from there -- SpinLaunch emphasizes a "ground-based kinetic energy" approach. Specifically, it proposes to use a centrifuge-like device to spin a rocket round and round like a slingshot, building up momentum, and then hurtling it into the sky at hypersonic speed.

Once at altitude, a chemical rocket then ignites, boosting the rocket the rest of the way into orbit.

Or at least, that's how it's supposed to work in theory. Whether it will work in practice is what DIU aims to find out with its "responsive launch prototype contract" announced last month.

Why it's worth a try

"Because the majority of the energy required to reach orbit is sourced from ground-based electricity, as opposed to complex onboard rocket propulsion," explains SpinLaunch, "total launch cost is reduced by an order of magnitude over existing launch systems."

To put that statement in context, New Zealand's Rocket Lab has recently begun launching smallish payloads to orbit aboard budget-priced Electron rockets for just $5.7 million to $6.6 million. That's much cheaper than SpaceX's advertised launch cost of $62 million. But SpinLaunch says it will be able to put similar-sized payloads into orbit for $250,000 -- and launch five times per day besides.

In a market where weeks and even months routinely pass between rocket launches, the ability to launch daily, and even multiple times per day, is obviously going to be attractive -- and not just to the military, but to commercial companies like Alphabet as well.

SpinLaunch aims to begin test flights early next year and, if all goes as planned, conduct its first launch by 2022. You can bet Alphabet will be paying close attention to the results -- as will we.