Starbucks (NASDAQ:SBUX) reported its fiscal third-quarter results on Thursday after market close, and they beat analysts' expectations pretty much across the board. The company grew net sales by 8%, and delivered some of its strongest comps growth (sales at stores open more than one year) in years.

That growth came from the two markets that management continues to tout as its most important: The U.S., its largest and biggest source of profits, and China, its fastest growing, which is expected to eventually surpass the U.S. for earnings.

Moreover, Starbucks' profits and operating results improved as a result of its efforts to streamline its business, helping deliver incremental profits far higher than revenue growth.

Let's take a closer look at how Starbucks performed in the quarter, and in particular, how it absolutely crushed it in the three areas we advised investors to watch in our earnings preview. 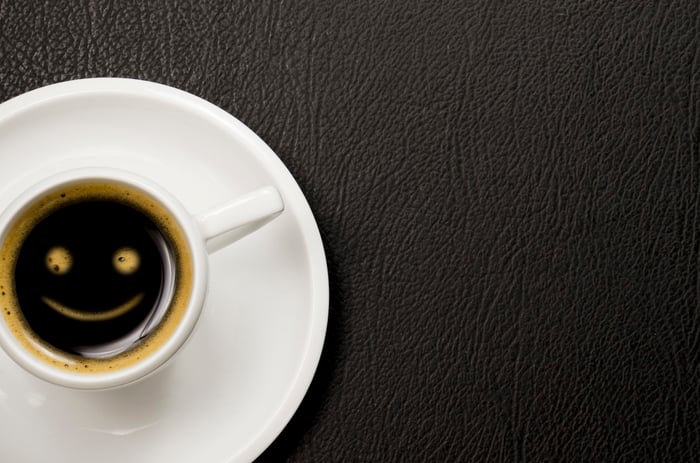 A look at Starbucks' results

Starbucks delivered solid results across the board, though its operating margin did weaken slightly. But even that metric is set to improve in coming quarters; in the earnings release, the company pointed out that about 50 basis points -- or half a percentage point -- in operating margin was lost to expenses related to actions it had taken to streamline operations.

It's also worth pointing out that this ongoing streamlining had a temporary impact on revenues: Starbucks said it took about 2% off the top line, while it lost another 1% to currency exchange headwinds. When factoring in those impacts, adjusted revenue increased 11%.

Now let's dive into the three biggest areas where Starbucks delivered in the quarter.

1. A return to traffic growth in the U.S.

If there's been one concern in the Starbucks story the past few years, it was traffic growth. Go back four or five years, and the company was regularly delivering 5%-plus comps growth, but those days seemed to be well and truly over. In last year's third quarter, Starbucks reported paltry 1% comps growth in the Americas, and a worrying 2% decline in transactions.

Since that low point, however, traffic has been steady, but transactions weren't increasing, even as average ticket size helped drive comp sales up by 3% to 4% in the first quarter and second quarter of fiscal 2019.

Well, that changed, and in a big way, in Q3. Comps in the Americas segment surged 7% higher, with a strong 3% increase in transactions. Those are Starbucks' biggest traffic gains in its biggest, most-profitable market, in years.

Moreover, CEO Kevin Johnson pointed out on the earnings call that it grew sales across all three dayparts, with growth in the afternoon for the first time in three years.

2. A huge quarter in China

While China still provides a much smaller share of Starbucks' revenues than the U.S., the company is investing tremendous resources to expand there. Those efforts continued to pay off in Q3: Comps increased 6% in the country, with transactions up 2%. For context, comps in China were 3% higher in Q2, but transactions actually fell 1%.

In addition, the company continued to add new stores there at a high rate. Nearly one-third of the 442 Starbucks opened globally in Q3 were in China.

Total revenue in its China/Asia Pacific segment grew 9% in the quarter, while operating income increased 15% to $270 million. So far, it seems that the company's strategy -- stick to making high-quality products rather than trying to compete on cost -- is paying off, even as the competition ramps up its efforts to undercut Starbucks on price.

3. Improved operating efficiencies are paying off

The decline in Starbucks' operating margin might make it appear the company's efforts to improve its cost profile aren't working out yet. But a deeper look at the company's results, combined with some extra context that management provided, tells a different story.

Starting with operating margin, the company said its efforts to streamline are costing a bit more in the short-term, adding about 70 basis points -- or 0.7 percentage points -- to operating expenses as a percentage of revenue.

But even if it's increasing some expenses in the short term, Starbucks management said its strategy to free up store employees' time to focus on more customer-facing activities is already paying off. On the earnings call, Johnson said the "initiatives we are driving in the U.S. to simplify work, allocate labor to better meet customer demand, and improve our customer connections, all contributed to the strong performance in comp transaction growth."

The biggest impact on consolidated operating margin came in Channel Development, where operating margin fell a sharp 690 basis points to 34.1%. And while in the past I've pointed to this segment as a major contributor to Starbucks' bottom line, last year's licensing deal with Nestle changed the structure of this segment, and hence the operating margins it will generate going forward.

Following its successful fiscal Q3, Starbucks management raised the bar on its fiscal-year expectations. CFO Pat Grismer called for GAAP EPS of between $2.86 and $2.88, up from a $2.40 to $2.44 range forecast previously. Adjusting for a number of non-recurring benefits and expenses, non-GAAP EPS expectations are between $2.80 and $2.82, up from a previously forecast range of $2.75 to $2.79.

Comps are expected to increase 4% globally, the high end of the earlier range of 3% to 4%, while sales are expected to increase 7% globally, after 2% and 1% in impact from ongoing streamlining and foreign currency exchange effects, respectively. Moreover, that's also after cutting back on its new store expansion plans from 2,100 to 2,000 -- it's taking 100 new stores in EMEA it had planned to open this year off the table. The company made no changes to the numbers of planned openings in other markets.

Put it all together, and Starbucks is continuing to operate its business incredibly well, even as it approaches 31,000 stores globally. Maybe most importantly, the company showed last quarter that it can drive down operating costs, while simultaneously attracting and serving even more customers, more profitably. That's an impressive feat for a company of this size.