Please ensure Javascript is enabled for purposes of website accessibility
Log In Help Join The Motley Fool
Free Article Join Over 1 Million Premium Members And Get More In-Depth Stock Guidance and Research
By Rich Smith - Aug 13, 2019 at 7:17AM

Even small contracts can be big news to small companies, and Vector Launch -- just three years young and yet to put its first rocket in orbit -- had some big news to share last week.

Three years ago -- not long after the company's founding -- Vector was as a "small rocket" company that's looking to put small satellites in orbit for as little as $1.5 million a pop. In the years since, we've watched as Vector attracted funding from venture capital, notched technology development contracts from both NASA and DARPA, started signing up commercial customers, and even publicly mulled prospects for an IPO.

Last week, Vector scored another first when it won its first-ever contract from the United States Air Force. 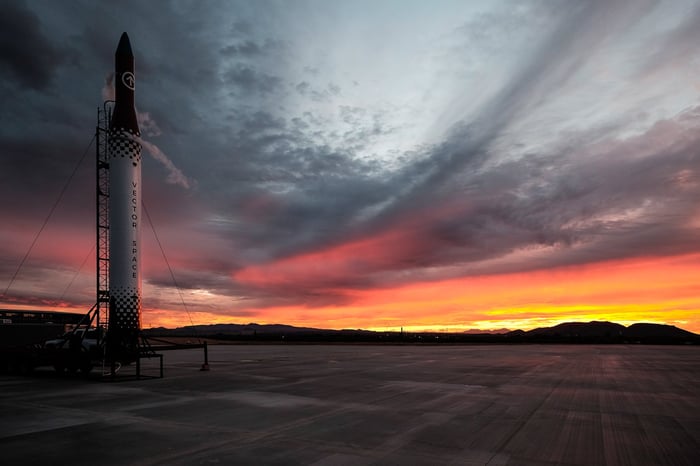 The Pentagon stamp of approval

As reported last week by SpaceNews.com (and immediately confirmed by Vector), on August 6 the U.S. Air Force Space and Missile Systems Center awarded Vector a contract worth $3.4 million to put an "ASLON-45 space vehicle" containing "multiple 3U and larger U.S. government cubesats" into Low Earth Orbit.

Vector will be launching out of one of NASA's smaller spaceports, specifically the NASA Wallops Flight Facility opposite Chincoteague Island in Virginia -- the same facility, by the way, where Vector rival launch provider Rocket Lab is building its own secondary launch complex.

Vector's launch is scheduled to take place sometime in Q3 2021, but now there's a new question: Will Vector even be around in 2021 to launch the rocket?

A shocking turn of events

From at least one perspective things appear to have been going swimmingly for Vector, with contract wins in both the public and private sector. In June the company tapped a former finance executive at space firms Sierra Nevada and Blue Origin to become its CFO, further evidence that Vector was ready to join the ranks of name-brand space firms.

But here's the thing: Vector has been promising to conduct its first orbital launch for over a year -- but to date, we've seen it conduct only a handful of suborbital test flights. In the meantime, New Zealand's Rocket Lab has already begun launching rockets, and seems to be running away with the small launch market. And over at Virgin Galactic, Sir Richard Branson is in the process of creating the first publicly traded "new space" company.

What's been the hold-up at Vector? No one seems to know for sure, but apparently somewhere behind the scenes trouble was brewing. And we know this because news broke over the weekend that Vector had parted ways with its CEO and co-founder, Jim Cantrell -- and rumors began swirling that the company itself might soon have to close its doors.

In response to a significant change in financing, Vector Launch Inc (Vector) announced today that it is undertaking a pause of operations. A core team is evaluating options on completing the development of the company's Vector-R small launch vehicle, while also supporting the Air Force and other government agencies on programs such as the recent ASLON-45 award.

An accompanying tweet further confirmed the "departure of Jim Cantrell from Vector and appointment of John Garvey as new CEO."

Despite the assurance that Vector intends to fulfill its new Air Force contract, the need to "evaluate options" on "completing the development" of its rocket suggests Vector may not be as close to an orbital launch as had previously been promised. And in that case, all of the contracts Vector has won -- from commercial firms like Iceye, and from the U.S. government itself -- could be put at risk.

With its visionary CEO gone and support from VC backers apparently eroding, it sounds like Vector may not live to see its first rocket launch.

And as an early fan of Vector, I'm more than a little disappointed. In contrast to Elon Musk, who's on record saying he has no intention of IPO'ing SpaceX before he's got a Martian colony up and running (an event that could be decades away), Vector's CEO was forthright about his plans to take Vector public sooner rather than later. Indeed, at one point I thought Vector might become the first pure-play "space company" to IPO, and our first chance to invest directly in the space economy.