Please ensure Javascript is enabled for purposes of website accessibility
Log In Help Join The Motley Fool
Free Article Join Over 1 Million Premium Members And Get More In-Depth Stock Guidance and Research
By Nicholas Rossolillo – Sep 19, 2019 at 10:12AM

A 50% rally in the stock price this year may not be sustainable for the laser systems and components maker.

While a lot has changed this year for Coherent (COHR) stock, the overall outlook for business remains the same: uncertain, at least in the short term.

The laser systems and components maker has rallied on better-than-feared results as well as rising activity in the OLED screen manufacturing industry. Some signs have emerged that investments in manufacturing facilities might be gearing up for a rebound, and a resolution to geopolitical unrest and trade disputes (between the U.S. and China, as well as one between Japan and South Korea) would also be a welcome event. But after the 50% climb in stock price already this year, at least some of that optimism is now priced in.

Coherent makes industrial lasers and components used in the manufacture of everything from semiconductors and flat panel displays to materials processing, as well as in biotechnology and medical imaging equipment. As a manufacturer and supplier, Coherent's business is thus cyclical and dependent on the capital investing activities of its end customers. Put simply, business spending on equipment ebbs and flows, and thus Coherent's fortunes do as well.

That fact has been on display this year. Multiple headwinds have been working against the company for the last year, keeping sales muted and profit margins low. During the most recently reported quarter (the three months ended June 29, 2019), sales were down 30% year over year and 9% quarter over quarter, respectively, to $339 million. That number meant an operating loss of $7.16 million, although operating income was positive $74.5 million through the first three quarters of the 2019 fiscal year. 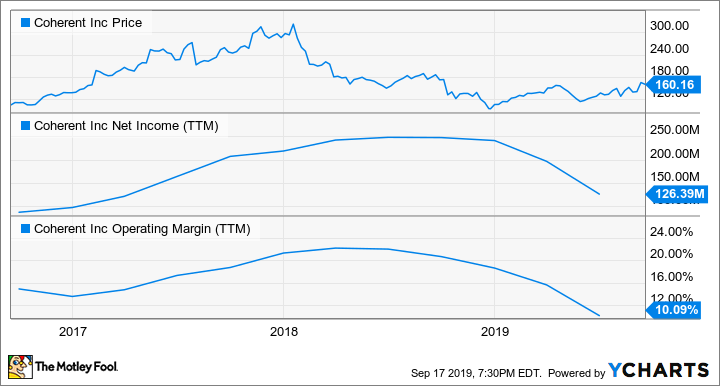 Given the ugly looking numbers, why the big rally in share price? Since manufacturing outfits like Coherent are cyclical, it's all about future expectations, and a few developments have provided some reasons for optimism. Management has reported that, while many customers are awaiting clarity in the various trade disputes going on, request for proposal (RFP) activity is up -- a good indication that capital spending on equipment will soon ramp up.

Adding to higher RFP activity is the planned expansion within the OLED market, a key industry for Coherent as its components are a key part of the build process. As OLED screens find their way into an increasing number of applications from smartphones to big-screen TVs, the number of facilities building them needs to increase as well. Coherent CEO John Ambroseo had this to say on the earnings call for the 2019 fiscal third quarter:

We and everyone else in the OLED universe are tracking more than 20 new fabs planned between now and 2023 with emphasis on flexible OLED. This will drive incremental investment in laser lift-off, or LLO, where we continue to hold substantial market share. Our data suggests that we won two-thirds of the orders and approximately 80% of the revenue in new LLO equipment orders over the last 12 months.

OLED is of course only one outlet for industrial laser use, with medical and materials processing also contributing as long-term drivers for Coherent. Nevertheless, a few areas of strength in 2019 have been responsible for most of the stock's upward momentum. A widespread downtrend in industrial spending has generally been the theme. As of this writing, trailing one-year price to earnings ratio sits at 30.9, compared with 21.6 one-year forward price to earnings -- implying an expected rebound in other areas of business in the year ahead. 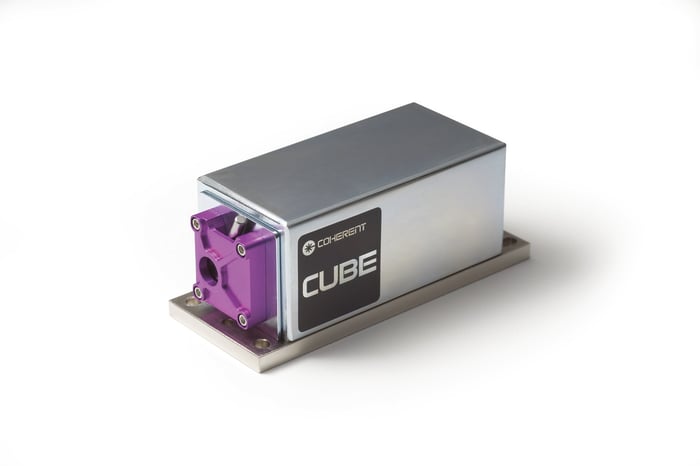 A long-term cyclical play on tech

Still, the big rally this year has come ahead of any bottoming in financial results, and an implied increase in industrial activity is far from a sure bet. If a turnaround doesn't transpire soon, some of the recent gains may reverse. If the turnaround does come, some more stock gains are likely imminent.

Put another way, I think Coherent stock is fairly valued at this point. Though the long-term outlook for industrial lasers and their place in the global manufacturing process looks bullish, this is a volatile business model that can turn up or down without much notice.

It's also worth noting that Coherent isn't the only game in town. There's also IPG Photonics (IPGP -1.83%) which focuses its attention on newer laser technology and thus has higher profit margins and return on invested capital than Coherent. 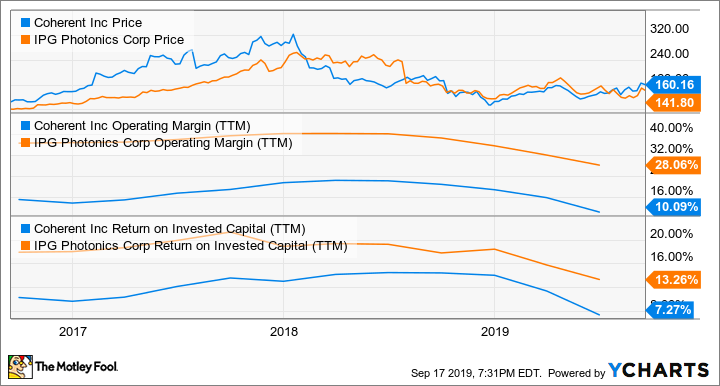 However, higher margins don't change the fact that manufacturing is a cyclical business, and IPG has also been facing stiff Chinese competition undercutting its pricing. Coherent or IPG, it doesn't matter. I think investors would be best served by buying industrial laser stocks on weakness, holding for the long haul, and adding to positions on the downside. This might be one of those instances to buy in on weakness, but dipping a toe in to test the waters first looks like the prudent option right now.