Declining markets for the soft-drink company and the brewer make it challenging to pick one over the other, but it can be done.

Because analysts believe a recession is looming despite employment, housing, industrial production, retail sales, and consumer sentiment all doing better than expected, here's my view on which is the preferable investment in the face of conflicting signals. 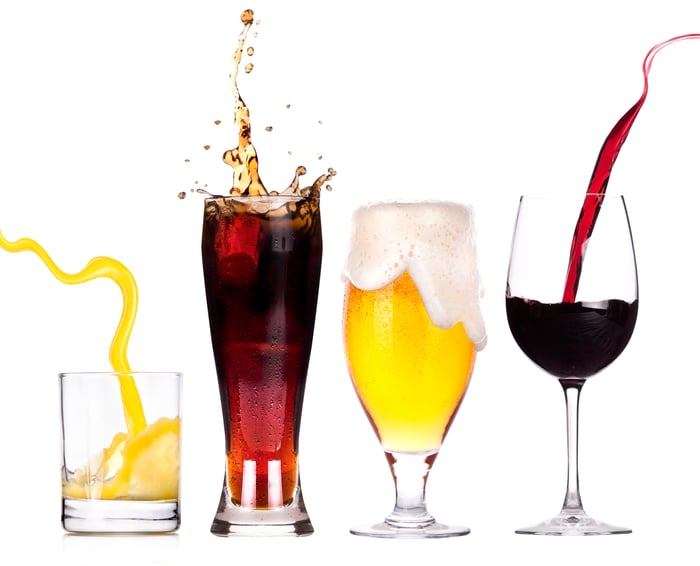 Both Pepsi and Anheuser-Busch are confronted with a changed landscape. Consumer tastes are shifting toward more healthy food and beverages causing a prolonged decline in sales of soda, snacks, and beer.

Pepsi responded earlier and more forcefully than Anheuser-Busch, acquiring businesses that make better-for-you food and drinks, such as SodaStream, Muscle Milk, Bare Foods, and others. It's also looking to international markets for help.

The effort has led to modest but steady increases in organic sales, which were up 3.7% for 2018 and have continued rising this year, with organic growth climbing 4.8% year to date. Yet operating profits continue to be pressured by a combination of factors, leading to a 2% drop so far in 2019.

At 24 times forward earnings, Pepsi trades at a premium to the market as a whole, which currently sits at 22.5 times. Its dividend of $3.82 per share currently yields a respectable 2.8% annually as the stock has gained 22% for the year, a big recovery for the soft-drink maker, which ended 2018 with the stock down 8%. Investors may want to use caution after the big run-up.

Anheuser-Busch also made numerous acquisitions, buying up a dozen or so craft brewers over the years, but that was more in line with its primary business and the changing industry landscape was much more nuanced.

It was not so much to craft beer where the market was moving, as sales growth has slowed considerably over the years in the segment, but was truly driven down to the local level as well as to imports, particularly Mexican beer. Beer alternatives like hard seltzer have also exploded in popularity.

Anheuser-Busch was also saddled with substantial debt by acquiring Miller and last year was forced to cut its dividend in half to conserve cash to pay down its debt load. It has also sold its Australian business and is spinning off its Asian unit to raise cash.

Its international division is in better shape than the U.S. market, with revenue up 6% on the strength of Corona, Stella Artois, and Budweiser.

With its stock soaring this year 46%, Anheuser-Busch trades at an even bigger premium to the market, trading hands at over 26 times earnings. Its dividend offers a 2.1% yield.

The better buy in drinks

Because both businesses have improved so much this year compared to 2018, their stocks have priced in almost all of the good fortune, making it difficult to recommend either one at their current valuations.

Pepsi does have a more diversified business with its Frito-Lay snack unit, but that has put it doubly under pressure. Anheuser-Busch still needs to pay down a mountain of debt, meaning it will likely need to shed more businesses, hamstringing its efforts to grow.

Both companies look better than a year ago, but if forced to choose between them, I would go with PepsiCo because of the greater opportunities it presents. Ultimately, Anheuser-Busch is still just a brewer and that market remains in decline.