Dividends paid by tech giants generally aren't that impressive. Microsoft, Apple, and Oracle each pay dividends with single-digit yields, and Alphabet and Amazon.com don't pay dividends at all.

International Business Machines (NYSE:IBM) is a different story. Thanks to a beaten-down stock price, IBM's dividend yield trounces most of its peers and the major stock indexes. And its dividend track record goes all the way back to before the existence of most other tech companies.

Here's what you need to know about IBM's dividend.

With a diluted share count of 890.8 million at the end of the second quarter of 2019, IBM is on pace to send shareholders $5.77 billion in dividends over the next year.

IBM normally pays quarterly dividends on March 10, June 10, Sept. 10, and Dec. 10 each year. Here are the key dates for the past four dividend payments:

How long has IBM been paying a dividend?

This streak began when the company was still known as the Computing-Tabulating-Recording Company, which was formed in 1911 by the combination of four different companies. CTR changed its name to International Business Machines in 1924.

Has the dividend been growing?

IBM's dividend has been growing steadily for around 20 years, although this growth followed a difficult period for the company. IBM nearly imploded in the 1990s as the personal computer and client/server model rocked its business model. The dividend was cut in 1993 and then fell further as IBM's bottom line dipped deep into the red.

IBM was successfully turned around by CEO Lou Gerstner, an outsider who took the helm in 1993. Gerstner cut costs and fought off calls to break up the company, recognizing that IBM's ability to offer integrated solutions was a key competitive advantage. Massive losses eventually turned back into profits, and dividend growth was restored. 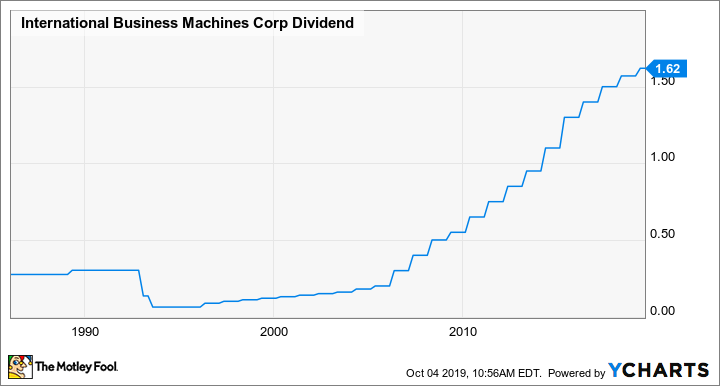 The payout ratio based on this new earnings guidance is 50.6%. Based on the company's free cash flow guidance of $12 billion, the payout ratio is 48.1%. This means that the dividend eats up approximately half of the company's profits. The rest has typically been used for share buybacks in the past, but IBM plans to suspend share buybacks in the wake of the Red Hat deal and focus on debt repayment.

While IBM's payout ratio isn't all that high on an absolute basis, it is high historically for the company. Dividend growth will likely be slow, at least for the next few years, as IBM works to reduce its debt load and return to consistent earnings growth.

The good news: The dividend is unlikely to be cut, given IBM's competitive advantages. IBM is deeply embedded in many industries, including banking, and its mainframe systems are extremely sticky. The company's decades-long relationships with customers and its broad portfolio of hardware, software, and services give it an important edge.

Is IBM a good dividend stock?

With a dividend yield more than double that of the S&P 500 and a reasonable payout ratio, IBM is a solid dividend stock despite its sluggish dividend growth.

On top of a high dividend yield, IBM trades at a beaten-down valuation. The stock goes for a price-to-earnings ratio of just 11, based on 2019 guidance. With the Red Hat acquisition presenting cross-selling opportunities measured in the billions of dollars, a combination of earnings growth and multiple expansion can drive the stock higher in the coming years.

IBM certainly isn't a growth stock -- the best investors can hope for is slow-and-steady growth. But that may be all it takes to turn IBM into a winning investment.

IBM Dividend: Everything You Need to Know @themotleyfool #stocks $IBM Next Article
Current