Facebook (NASDAQ:FB) introduced a new messaging app last week, called Threads. The new camera-focused app would make it easy for users to quickly share content, including photos and videos, with a select group of friends. If it sounds similar to Snap (NYSE:SNAP), it's because it is. It's Facebook's latest attempt to copy some of Snap's key features.

It's not as if Facebook doesn't already have a messaging app within its ecosystem. It even owns WhatsApp as well. The move creates yet another messaging app, this time for Instagram. But being able to get users to ditch Snap for Threads, however, could prove to be an uphill battle.

For Facebook, this is just its latest attempt to try to lure users away from Snap. The company has made numerous attempts to copy the camera app in the past with multiple apps of its own, including Poke, Slingshot, and Direct, all failing to win over users. The latest iteration, Threads, could be doomed for a similar fate. The previous apps were also seen as potential threats to Snap, and yet they all failed to live up to that potential. There's little reason to believe that Threads will be any different. 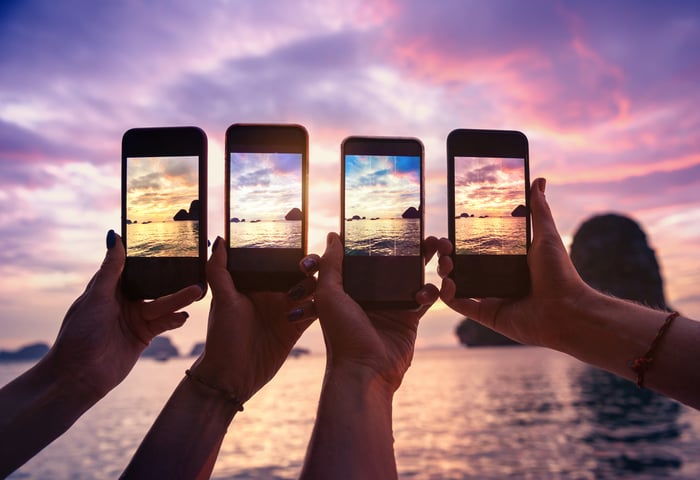 With Facebook having a poor reputation when it comes to protecting data, users may be hesitant in trusting the company to safeguard any sensitive videos or photos that they send. And the app's Auto Status feature is also a concerning reminder of what type of information Facebook could be collecting through Threads.

It's difficult to gauge why Facebook has failed in the past, but it has definitely put a dent in Snap's growth and if not for a redesign of its Android app that helped it attract more users, Snap could be in much worse shape today.   The company has been able to build off that momentum in its most recent quarter with Snap seeing an 8% year-over-year increase in its daily active users (DAU), hitting 203 million.

Although Snap's DAU numbers have been a bit volatile over the past year, the recent figures suggest that the user base still remains strong and that it can continue to grow.

Snap's shares initially fell on news of the Threads app being released, although they have bounced back since then.

While there are obvious concerns about Snap's competitiveness with Facebook given the social media company's size and resources, Snap has remained a hit with millennials with more than half of them using the camera app every day. Although it still lags behind Facebook, and Instagram is very competitive as well, what's important for Snap's advertisers to see is that the app is still popular with younger audiences, which are very valuable. For investors, this means that there's still hope for Snap to succeed. And while it may be a long way from reaching breakeven and the company will likely continue to bleed cash, what matters is that there's a path to do so, through its strong user base.

Whether because of Facebook's privacy issues and scandals, or Snap simply being the more popular with younger audiences, it's clear that users aren't willing to ditch Snap despite Facebook providing very similar apps. That's a good sign that Snap has developed a strong brand and that it has a loyal user base that may be tougher for Facebook to convert than it expected. And that could be key in convincing investors that the tech stock is still a good buy today.