Of all the big technology stocks, Apple (NASDAQ:AAPL) has been viewed as the value stock of the bunch. While most of the high-flying big tech companies have seen their stocks awarded with high price-to-earnings multiples in recent years, Apple has not. In fact, over the past three years, Apple has only earned itself a P/E ratio, on average, in the mid-teens, lower than the broader market's current P/E ratio of 22. 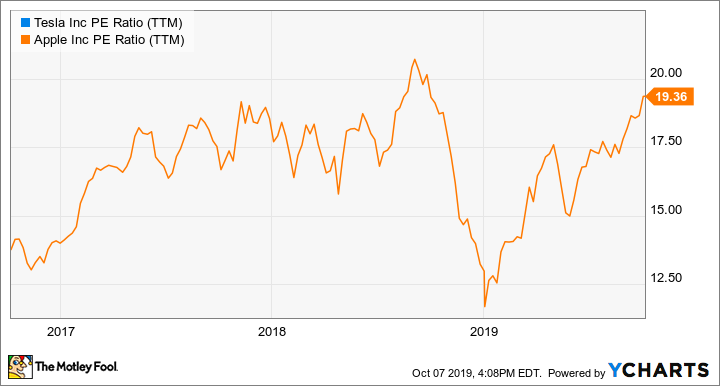 This is because, unlike the other large-cap internet giants, Apple is seen by investors mostly as a hardware maker. Hardware sales tend to be more inconsistent than service or subscription revenue, and thus earn lower P/E multiples. At the same time, many had feared that Apple's flagship iPhone product, from which Apple has earned a majority of its revenue (on an annual basis) in the recent past, may have saturated the market.

However, its seems that Apple's stock may very well be at an inflection point that could earn the company a growth multiple once again. Here are three reasons -- one for the short, medium, and long term -- to be excited about Apple's prospects once again. 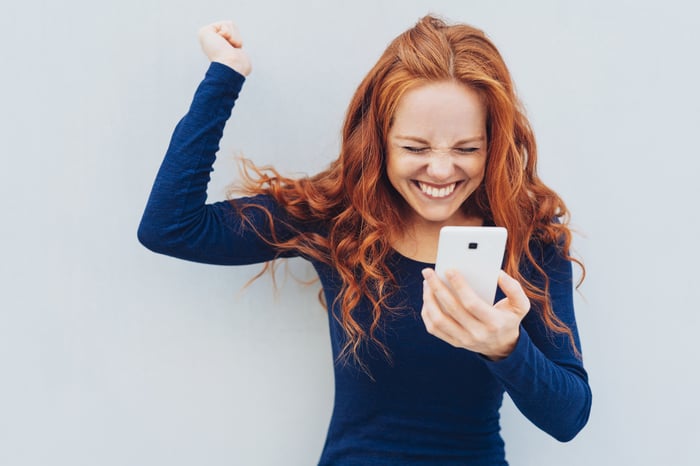 Apple may be the most exciting technology stock today. Image source: Getty Images.

In the near term, many analysts focus on iPhone sales, especially during the fall, when Apple releases its new phones. According to Nikkei Asian Review, Apple recently put in an order with Japanese component manufacturers to increase their output by about 10%, based on the strength of initial sales for the iPhone 11, which just came out in September.

The demand for the new iPhone may be somewhat of a surprise, given that many had expected consumers to wait for next year's introduction of a 5G model before refreshing their phones. Apple had initially put in a conservative order for slightly fewer iPhone orders this year. However, it appears that the iPhone 11 is actually tracking ahead of last year's iPhone XR and XS series.

Of course, last year's launch of the iPhone XS and XR were disappointing, as Apple's price hikes for 2017's iPhone X, starting at $999, ran out of demand when Apple tried to keep similar pricing the following year. Even the "cheaper" iPhone XR starting at $749 wasn't quite cheap enough to lure customers to refresh in 2018. At that time, the U.S.-China trade war had just erupted, and the Federal Reserve was raising interest rates, perhaps adding to consumer reluctance.

But the discounting doesn't stop there: Apple is also currently giving consumers three more ways to lower the price of their iPhone 11 even further. First, Apple is more assertively marketing its trade-in program, whereby consumers can trade in old iPhones for discounts -- some of which could be substantial -- toward a new phone. Second, Apple conveniently released the Apple credit card late this summer, ahead of the launch of the new phone. Since the Apple Card gives you a hefty 3% cash back on all direct purchases with Apple, that's another $20 toward your new iPhone 11. Finally, Apple also threw in a free year of its new video streaming service, Apple TV+, which hits the market on Nov. 1 -- a $60 value. All told, customers could essentially receive an $80 discount on the iPhone 11 before the trade-in discount, which could also yield hundreds of dollars in additional savings.

Yet rather than being pure "discounts," all three of these customer incentives further tie customers to the Apple ecosystem. The ability to trade in a phone for a discount -- which Apple can then resell -- makes customers much more likely to stick with Apple over switching to an Android product. Apple also makes money for users of the Apple card from interest charges, and the free trial for Apple TV+ is a unique way to interest consumers who now have a plethora of streaming TV options.

These discounting moves add to an already robust slate of services coming from Apple this year. Not only is Apple releasing its credit card and Apple TV+, but also Apple News+, a news aggregation app, along with Apple Arcade, a subscription-based gaming service with over 100 mobile games. But Apple isn't stopping there. Recent reports have shown that Apple may bundle all of these new services, along with Apple Music and its 60 million-plus subscribers, into an entertainment "super-bundle" for Apple users, with an additional discount.

Yet beyond these entertainment, news, and financial services all delivered through the Apple ecosystem, an even bigger deal may be Apple's health initiatives. Apple's health apps already deliver heart, exercise, sleep, and menstrual cycle monitoring, as well as a number of other tools for doctors and researchers. In addition, Apple is collaborating on three new health studies this year in hearing, heart health, and women's health, which will use data from the Apple Watch and Health app for these studies. There's even more going on with healthcare at Apple; CEO Tim Cook boldly declared earlier this year, "[I]f you zoom out into the future, and you look back, and you ask the question, 'What was Apple's greatest contribution to mankind,' it will be about health."

These new services, all tied to the Apple ecosystem, should go a long way toward lifting Apple's status beyond a mere hardware maker to an all-encompassing ecosystem with lots of recurring revenue.

Finally, both of these trends -- device sales, and more essential services -- should get a turbocharge from 5G, once the new communications standard becomes ubiquitous over the next decade. Beginning next year, not only will consumers start to upgrade to 5G-enabled devices, but 5G will also open up new opportunities for services that haven't been possible on the 4G standard.

That should help Apple on both the hardware and the software and services side, and this multiyear catalyst will begin next year, when Apple will supposedly be releasing its first 5G phones.

The next phase of Apple

Apple was once known purely as a producer of computers -- in fact, Apple's original corporate name was "Apple Computer" when it was founded back in 1976. The company became the center of consumers' musical worlds with the iPod in 2001, and later the center of consumers' entire social worlds with the iPhone in 2007. Now, Apple is transitioning to its next phase, tying the iPhone, Watch, and other devices to an essential services ecosystem across entertainment, finance, and health. Each prior product evolution has led to Apple's stock surging to greater and greater heights, and I think investors should expect more of the same this time around as well.