Aphria (NASDAQ:APHA) has been one of the few bright spots in the legal cannabis space in 2019. Earlier this week, the company posted its second straight profitable quarter, and it is showing definitive signs of transforming into one of the industry's most compelling growth stories.

Even so, Aphria hasn't been able to escape the black hole that has been the legal marijuana industry this year. While the company's shares have "outperformed" the broader marijuana industry over the past 10 months, Aphria's shares have still lost almost 15% of their value in 2019. The direct consequence is that Aphria now sports the absolute cheapest valuation among its immediate peer group. 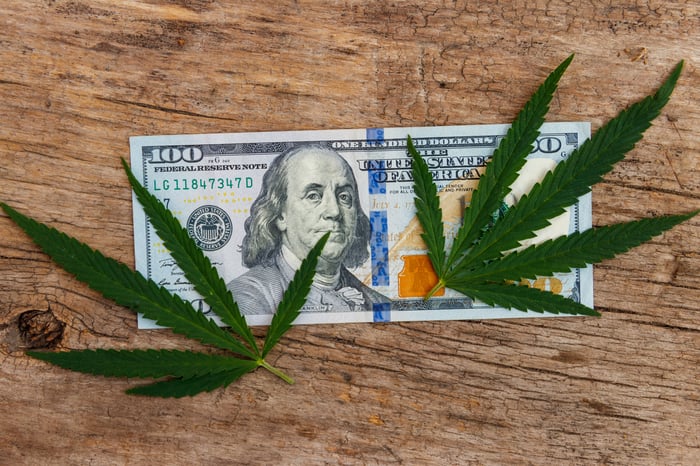 Should bargain hunters pounce on Aphria's clearance-rack valuation? Let's check out the company's underlying investing thesis to find out.

Aphria's place in the pantheon of Canadian pot stocks

All figures are presented in Canadian dollars at current exchange rates. Net revenue was gleaned from earnings reports for the most recent fiscal quarter. Please note that these revenue figures are not directly comparable across companies due to key differences in their financial calendars.

Thanks largely to its German subsidiary CC Pharma, Aphria has posted two impressive quarters in a row in terms of net revenue generation. Nonetheless, the company still sports the lowest market cap and trailing-12-month price-to-sales ratio among Canada's big five by a country mile.

Aphria also exited the most recent fiscal quarter with a noteworthy 464.3 million Canadian dollars in cash, cash equivalents, and liquid marketable securities. That's a sizable war chest to further its domestic and international expansion plans. Most critically, Aphria stands as one of the only Canadian pot companies -- besides Cronos and Canopy Growth -- with a healthy cash runway. Aurora and Tilray could both face a serious cash crunch in the not-so-distant future.

However, one of the most important components of Aphria's overarching value proposition can't be found on its balance sheet. What is it? In early 2018, Aphria acquired the premium cannabis brand known as Broken Coast grown on Vancouver Island, Canada.

While brand recognition has yet to truly come into play in the nascent Canadian cannabis market, it eventually will be a key factor that separates the wheat from the chaff. Broken Coast, for its part, has already earned a small but loyal fan base, which should translate into a strong competition advantage in the years to come. Every company needs a flagship brand and Aphria appears to have that essential ingredient with Broken Coast.

Why are Aphria's shares trading at such a steep discount relative to the industry's top dogs? While it's easy to point to the company's troubled past as perhaps the main culprit, there's arguably more than meets the eye when it comes to Aphria's rock-bottom valuation.

The sneaking suspicion on Wall Street is that Aphria will eventually succumb to the industry's ongoing consolidation phase -- an issue that would place a hard cap on its upside potential in the event of an all-cash tender offer. After all, a big-time player like Coca-Cola, Diageo, Nestle, or PepsiCo would be highly unlikely to do a share swap as part of a merger agreement with Aphria. Put bluntly, Aphria probably won't turn out to be a golden ticket to the era of big weed.

That doesn't mean that investors should ignore this name, however. Aphria should have plenty of room to run before the industry matures in such a fashion that would permit heavy investments from the likes of, say, Coke or PepsiCo. Moreover, Aphria's top line should continue to tick higher over the next several years due to the upcoming rollout of high-margin derivative products in Canada, as well as its strong foothold in Germany.

All told, Aphria's industry-low sales multiple, stellar near-term outlook, pioneering brand-building efforts, and healthy cash position all act in concert to make its shares a classic value play. The same simply can't be said for most of the other Canadian pot companies at the top of the food chain right now.