Intuitive Surgical (NASDAQ:ISRG) specializes in robotic surgery and minimally invasive techniques, with its well-known Da Vinci surgical system. The healthcare company also began selling Ion endoluminal systems in the most recent quarters, which allow for minimally invasive lung biopsies. It has delivered sustained rapid growth, with revenue averaging a compound annual growth rate (CAGR) of 16% and net profits growing 24% annually over the past three years, which has created substantial optimism around the stock.

That said, heading into a potential recession, it might not be a great time to own growth stocks with hefty valuations. Intuitive Surgical has returned more than four times the S&P and S&P healthcare indexes since the market bottom in May 2009, so it makes sense to assess the continued validity of a long position. 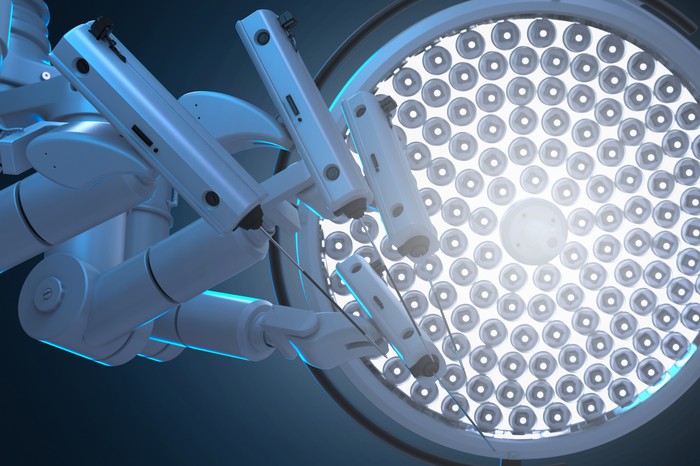 The stock has been volatile over the past year, achieving (at the time) a record high in September 2018 of approximately $575, followed by a 20% tumble by year's end. Shares had then recovered and climbed to $582, only to drop 20% again in April and May 2019, before once again rebounding to $550. Overall market swings drove some of this volatility, but the company's Q1 2019 earnings announcement came in below analysts' forecasts.

The number of procedures using the company's Da Vinci system grew 20% year over year, and new system shipments were up 19%, indicating continued strength in demand. Intuitive Surgical's adoption of leasing and financing arrangements are helping to broaden the addressable market, with many healthcare facilities unable to afford up-front payments that can be as high as $2 million for Da Vinci systems. The installed base rose to 5,406, providing a strong catalyst for recurring service and equipment revenue. The top line expanded 23% to $1.128 billion, with net income rising 35%.

Intuitive Surgical stock is expensive to own

Forward price-to-earnings is high at 39, and even after adjusting for growth with the PEG ratio, it's still high at 3.14. The company's price-to-free cash flow multiple is over 60, and EV/EBITDA is over 40, both of which are high. Even price-to-book, which is above 8, is high, as the peer group average is closer to 3. Medical device and equipment peers, such as Medtronic, Becton Dickinson, Stryker, Boston Scientific, and Zimmer Biomet are all generally cheaper across this battery of valuation metrics.

Analysis of Intuitive Surgical is a mixed bag upon review. On the one hand, the company is delivering strong growth performance, operates a compelling business model, maintains a strong balance sheet and should enjoy a relatively stable demand for services across economic cycles. There is a clear bull narrative for growth investors who are willing to hold across potential market downturns.

However, Intuitive Surgical must deliver several years of strong performance to justify the current valuation. A high level of performance will become increasingly difficult as large competitors, such as Medtronic, enter the same markets to square off directly with Intuitive. This stock might not be appropriate for more volatility-averse investors who want to maintain exposure to the healthcare sector.