Please ensure Javascript is enabled for purposes of website accessibility
Log In Help Join The Motley Fool
Free Article Join Over 1 Million Premium Members And Get More In-Depth Stock Guidance and Research
By Ryan Downie - Nov 6, 2019 at 10:42AM

Ford's (F -2.72%) revenue fell 2% year-over-year to $37 billion for the third quarter, due to 8% fewer wholesale units sold and negative impacts from currency fluctuations. Sales growth in North America was not sufficient to offset double-digit declines in the automaker's South America, Europe, China, and Asia-Pacific segments.

Top-line contraction contributed to lower net income, narrower profit margin, and earnings per share that dropped from $0.25 in Q3 2018 to $0.11. These results included $1 billion of restructuring charges, and earnings actually rose five cents per share when adjusting for special charges. Adjusted earnings exceeded consensus analysts' estimates by 30% because investors anticipated many of the above struggles. Adjusted free cash flow also increased year-over-year by $100 million. 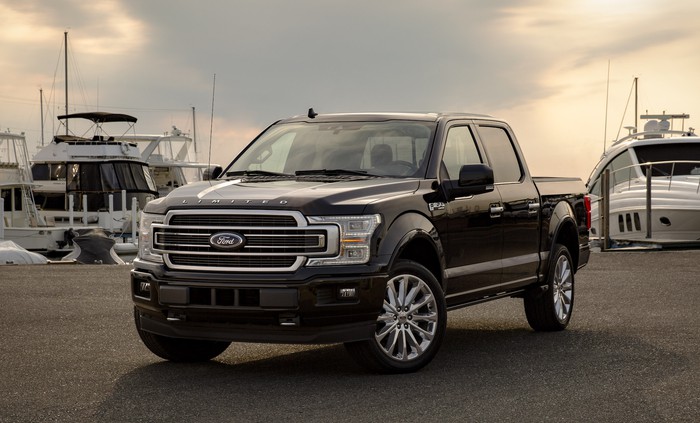 Notably, company management reduced its net income guidance for the full year by $5 billion. In a conference call, Ford executives indicated that weakness in China and higher-than-anticipated warranty expenses were the primary reason for the change in forecasts. Free cash flow forecasts remained unchanged, but the comments on outlook were nonetheless enough to spook investors.

Adjusted valuation is unspectacular despite the sell-off

Ford's price-to-earnings ratio is right in line with its peers at 21.3, but its adjusted EV/EBITDA of 13.5 is much higher than General Motors (GM -1.99%) or Fiat Chrysler (FCAU). Ford's unadjusted EV/EBITDA is 31.5, which is comparable to Tesla's (TSLA -6.42%) growth story, indicating that the stock is costly relative to its growth outlook. Ford has a price-to-book ratio below 1, and it trades at a free cash flow multiple of 4, both of which look favorable. Notably, Ford's 6.98% dividend yield is two percentage points higher than the aforementioned major auto manufacturers, Toyota (TM 1.78%), and Honda (HMC 0.04%). Ford's 1.5 dividend payout ratio might not be sustainable, indicating a future need to reduce dividends if earnings don't improve.

Ford's relative valuation metrics are a mixed bag, but significant non-recurring expenses are weighing on short-term profits, which make the metrics somewhat misleading. For these large, mature manufacturers, dividend yield might be the most critical factor for price evaluation, since rapid share appreciation above the market is not likely to be the primary return driver. That high yield indicates that investors either anticipate the cash payouts to fall or that they are building some risk discount into the price.

There are some financial health concerns for Ford compared to its peers. The company's long-term debt-to-equity ratio of 2.81 stands out in the peer group. GM's capital structure is the second most debt-heavy, with a ratio of 1.7. Ford's quick ratio of 1 indicates that there's no imminent liquidity risk, but its ratio of operating income to interest expense is only 1.5, compared to an auto industry average of 7.6. While the severity of this stat is likely overstated due to non-recurring charges and strong free cash flow relative to earnings, it is still worrisome if a recession is approaching.

Automakers operate in a very capital-intensive and cyclical industry. Protracted operating weakness could jeopardize Ford's ability to meet fixed financial obligations related to debt servicing, which would result in bad terms on subsequent debt and higher cost of capital, or threats of bankruptcy in the worst-case scenario. Not to say that such a problem is at hand, but Ford is more likely than its major auto peers to grapple with those challenges in the event of a severe industrywide slowdown.