Given the big inconvenience Mondays seem to present for much of humanity, perhaps it's good that this particular one didn't see a volatile session on the stock market. Shares of many companies, including numerous top stocks, basically traded sideways across the day.

That is, if they weren't Roku (NASDAQ:ROKU) or The Trade Desk (NASDAQ:TTD). Both saw substantial gains in their respective prices. Here's why, and a brief examination as to whether those gains might be sustainable. 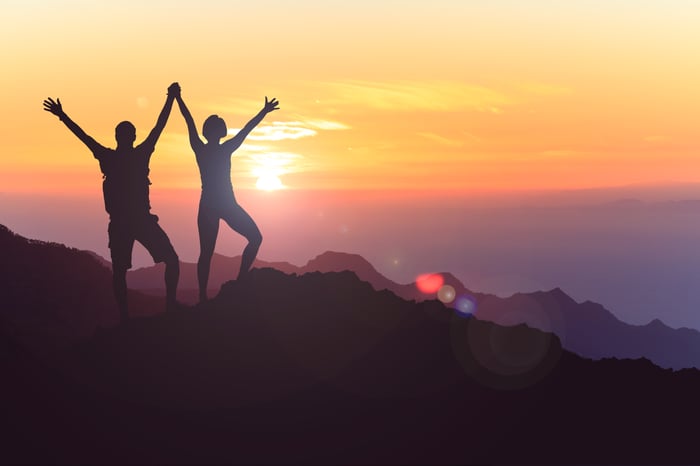 A new front in the Streaming Wars has opened. Entertainment behemoth Walt Disney is just in front of the launch of its high-profile Disney+ video streaming service. Disney+ joins the fast-growing ranks of streamers vying for your home entertainment dollar.

This profusion of streamers will clearly and obviously benefit a prominent TV set-top box purveyor like Roku, so it's no wonder the company's stock rose by almost 6% on the day. Roku is one of a handful of companies that makes the devices through which Disney+ will stream. Relatively quickly, the company has been a go-to option for any streaming purveyor due to its popularity and growing ubiquity.

Roku has clever management that has effectively leveraged its position as an important streaming platform. Because the company has built up scale, said platform is becoming an increasingly attractive medium for advertisers. The ad market in this segment is still in its infancy, and Roku is beautifully poised to take great advantage of it.

The company is also seeing the benefits of higher streaming services take-up. That's because Roku collects a share of subscriptions and video-on-demand offerings ordered through its platform.

Roku is doing very well as a business, and its potential is vast. The thing is, the entire investing world seems to know this: The company's stock has risen by over 320% this year alone, yet the company has rarely posted a profit.

Still, there are not many companies with the potential Roku has in front of it. I also like the fact that it's doing a fine job exploiting multiple revenue sources. So even after this latest of many stock price pops in recent times, I'd be a buyer of Roku shares.

The dramatic rise in the prominence of streaming thanks to Disney also lifted the shares of The Trade Desk on Monday. And there was every reason it should, as The Trade Desk is a state-of-the-art digital advertising marketplace that operates a popular cloud-based platform for its services.

The company is obviously in the right business at the right time. Last week The Trade Desk presented Q3 of fiscal 2019 results that beat analyst estimates, particularly on the bottom line. Growth is heady, with revenue rising nearly 40% on a year-over-year basis (to over $164 million) and non-GAAP (adjusted) net profit climbing almost 20% to $36 million.

This outperformance wasn't the first quarter The Trade Desk eclipsed estimates. Like with Roku, the stock market has taken notice of this -- even following a late summer slide, the shares are still up by 87% year to date. The stock was one of the biggest gainers on Monday, closing the day up by 11%.

So does it have more room to rise? Again, similar to Roku, I think it does. Although The Trade Desk stock is clearly on many investors' radar, I believe there remains some underestimation as to the enormous potential of the kind of sharply targeted digital advertising services provided by the company. On top of that, like many quality tech stocks, its business model is relatively light on costs and high on profitability.

That's why I'm very bullish on this stock, despite its rather lofty valuations at the moment. I think it can easily go much higher than at present.