It was bound to happen sooner or later. After seeing the stock slide for five straight days on worries that Congress would steal all its profits from a proposed sale of C-band spectrum to 5G internet providers, Intelsat (OTC:INTE.Q) investors finally got some good news today.

In an announcement that came out just this morning, the C-Band Alliance comprising Intelsat and its peer satellite communications providers SES and Telesat advised that they are offering the U.S. Treasury a generous chunk of any auction proceeds, assuming the Federal Communications Commission allows the auction to proceed. 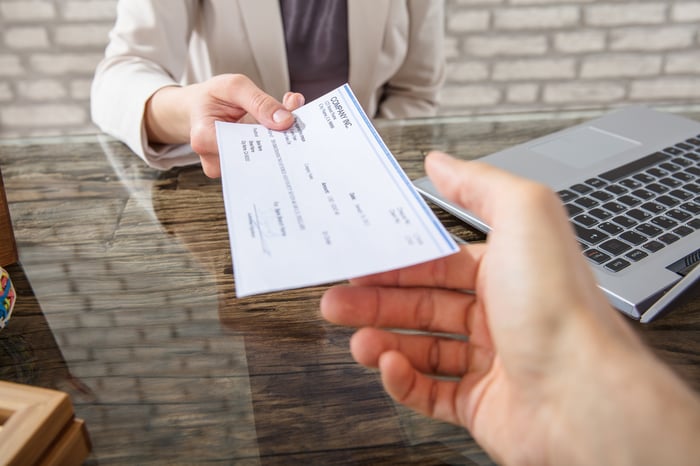 So what exactly are Intelsat and its friends proposing? In their statement, they explain:

If the FCC adopts the CBA proposal, the CBA commits to pay a portion of net proceeds of a CBA-led auction to the U.S. Treasury pursuant to the following progressive formula: 30% of net proceeds up to $0.35/MHz-POP, 50% of incremental net proceeds up to $0.70/MHz-POP, and 75% of incremental net proceeds thereafter. Net proceeds are proceeds received from the auction less the costs incurred to plan for and take all actions to implement the CBA proposal to clear 300 MHz of spectrum. This payment to the U.S. Treasury would be inclusive of all Federal income tax liabilities incurred by the CBA member companies as a direct result of the auction.

In other words, the companies are proposing a sort of progressive taxation on their profits. After handing over an initial 30% of their auction proceeds, they will agree to hand over progressively greater chunks of the loot the higher the bidding on their spectrum goes.

Politically speaking, this is a smart move. The higher the bidding goes and the more critics argue that Congress is giving away the store by allowing Intelsat and its peers to reap windfall profits on spectrum that, originally, belonged to U.S. taxpayers, the more money the companies will give away -- blunting that criticism and improving their chances of reaching an agreement.

Meanwhile, on Wednesday, analysts at Evercore ISI mused that a $0.50 spectrum price and a 50% total contribution rate would make Intelsat stock worth at least $20, while a 30% contribution rate could make the stock worth as much as $38. Assuming their math is right, even after today's pop to $14 and change, Intelsat stock could still be a bargain.