Please ensure Javascript is enabled for purposes of website accessibility
Free Article Join Over 1 Million Premium Members And Get More In-Depth Stock Guidance and Research
By Chris Neiger - Nov 17, 2019 at 11:35AM

More incremental moves by the company mean that Lyft is betting further on an autonomous ride-hailing future.

The new facility, located in East Palo Alto, California, will allow the company to increase the number of AV tests it can run. It will also let the company test how the systems do with different road configurations, including intersections, merging lanes, traffic lights, and similar challenges. The company said in the post that the new facility will let Lyft "further accelerate the speed of innovation." 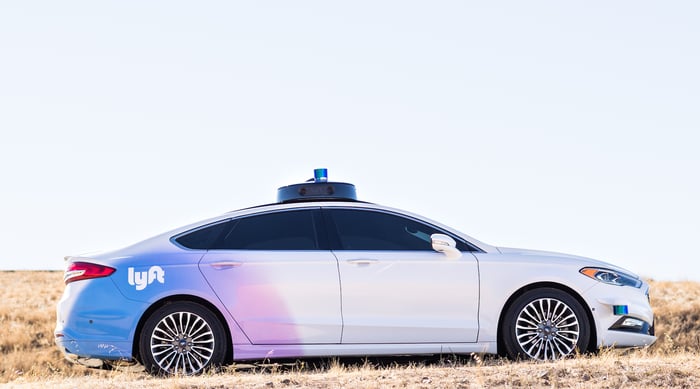 Lyft says that it's driving four times more autonomous miles per quarter than it was just six months ago and has about 400 employees worldwide working on self-driving tech. That figure is likely to expand, considering that Lyft has more than 40 autonomous vehicle job openings listed on its website.

Why does all this matter for Lyft's autonomous-vehicle future? Because to have a successful, public self-driving ridesharing fleet in the coming years, Lyft needs to lay the groundwork right now.

Lyft is, of course, already working on AV testing. The company's original self-driving test facility has been up and running since early 2018. The company also started a partnership with Waymo earlier this year to test autonomous ridesharing. Additionally, Lyft also works with Aptiv, an AV tech company, and together they've created "the largest publicly available commercial self-driving program in the country" and have completed more than 75,000 rides through the partnership.

But the recent announcements by Lyft show that the company is taking its AV focus a bit further. The Pacifica minivans have been used by Waymo's AV ridesharing program in Phoenix for more than a year now, making them a proven choice for shuttling around ride-hailing passengers. Lyft may not be ready to launch a wide-scale autonomous ridesharing service just yet, but testing out these vehicles likely means that it's moving past earlier stages of AV testing and is now looking at how its next-generation self-driving tech can handle new vehicles.

Why this matters for Lyft

Lyft and other ride-hailing companies, including Uber, are keeping a close eye on self-driving developments and testing out the technologies themselves because it could eventually become an integral part of their business model. Research from Intel predicts that the AV ridesharing market could be worth $3.7 trillion by 2050.

Additionally, as regulations surrounding ridesharing drivers continue to increase, Lyft is likely looking to AVs to eventually replace some human drivers. Just a few months ago, the state of California introduced a bill that could pave the way for independent contractors, including Lyft's drivers, to be reclassified as employees. If a version of the bill becomes law and other states follow California's lead, it could significantly increase operating costs for Lyft. That could be bad news for the company, which is unprofitable right now and hoping to be in the black just two years from now.

While Lyft's announcements may not seem all that significant right now, investors should know that these baby steps moving the company closer to AV ridesharing could have huge results in the coming years. For now, investors should be pleased that Lyft is beefing up its own AV testing. Each move the company makes now means that it'll be much more ready for a self-driving ridesharing future.