Following Uber's (NYSE:UBER) highly anticipated May 2019 initial public offering, the stock climbed to nearly $47 per share. The rest of the year has been less fortuitous for shareholders, who endured a fall to $29.22 by December. Rival company Lyft (NASDAQ:LYFT) experienced a similar ride. After being priced at $72 for its April 2019 IPO, shares briefly jumped above $75 before falling steeply to $50. Some mid-year momentum brought the stock back to $68, but a tough third quarter pulled Lyft all the way down to $40 before moving back up to $48. Both stocks are roughly 40% below post-IPO highs, while the S&P 500 is up approximately 8% over the same period.

Investors have soured on valuation, the business model's viability, or both

Uber trades at a 3.86 price-to-sales ratio, while Lyft trades at 4.46, and neither is projected to be profitable in the short term. For reference, the software industry average price-to-sales ratio is 2.12. In the most recent quarter, Uber reported 30% year-over-year revenue growth to $3.8 billion, while Lyft's revenue rose 63% to $956 million. Lyft is growing more rapidly, but Uber's top line expanded by a higher dollar amount. 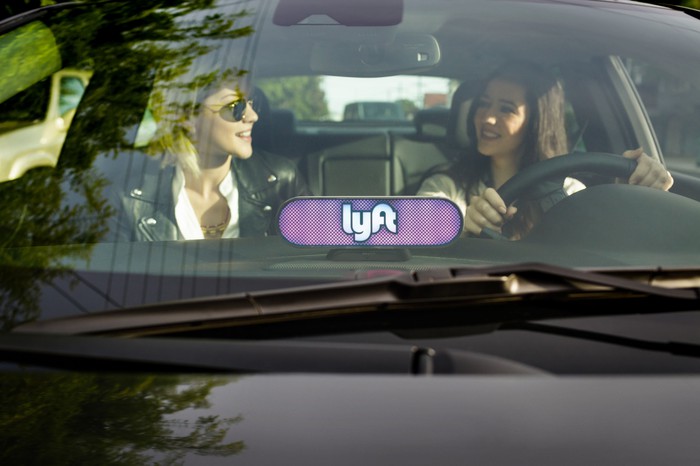 While both companies are growing rapidly, each is experiencing widening net losses. Uber and Lyft are investing aggressively in marketing, corporate infrastructure, and product development to support the scale to which both companies aspire. As a result, net losses are widening, which is often acceptable for growth investors. More mature companies will provide stable profits and financial returns, but transcendent share price appreciation typically only happens with rapid expansion.

Bull and bear narratives both have merit

The concerns swirling around Uber and Lyft are that the companies will increase scale and gradually exceed expense growth. Investors worry that the competitive landscape and the companies' business model will not support both growth and profits, and will increase spending to sustain the expansion. If that is indeed the case, both stocks would still be overvalued, despite the sharp drops from earlier this year.

The long position and bull narrative assume that Uber and Lyft can grow profitably in the future. To test the extremity of speculation, it can be informative to attach aggressive assumptions to near-term fundamentals and inspect the resulting valuation metrics. If Uber can close out this year with the same pace of growth, and sales expand an additional 30% again next year, the company's sales will be approximately $18.2 billion. The average application software net margin is between 8.8% and 16.1%. If Uber were able to match this level of profitability by next year, the company's profits would be between $1.6 billion and $2.9 billion, resulting in a forward price-to-earnings ratio between 17 and 31. For reference, consensus analysts' estimates call for $18.5 billion in sales and net losses of $2.6 billion.

Conducting a similar set of calculations for Lyft results in a forward P/E range of 16 to 28.

In reality, there is essentially a zero percent chance of Uber and Lyft following the same growth trajectory while delivering profits by next year, let alone those approaching industry averages. Management is not even targeting profitability in the short term, so this is merely a thought experiment to create perspective. Even if these rideshare companies were to start focusing on profits effectively, the valuations still would not look astoundingly cheap.

That doesn't mean that these prices are outrageously high on a forward-looking basis. In fact, they would likely charge much higher in the presence of near-term profits. But a great deal of bullish speculation is still clearly baked into the current market values, even after the poor performances following the IPOs.

Investors looking for consumer application software exposure that have been delivering high growth rates might want to consider alternatives if the speculation into Uber and Lyft is too unsettling. Twitter has a forward P/E of 29.4 and a price to free-cash-flow of 26.6. ANGI Homeservices trades at a 21.4 price to free-cash-flow ratio and a 24.2 EV/EBITDA. Grubhub is more aggressive with a 33.0 EV/EBITDA. None of these are perfect substitutes for Uber and Lyft, but they are alternatives with similar macro drivers, double-digit revenue growth forecasts, and near-term profit opportunities.