Please ensure Javascript is enabled for purposes of website accessibility
Log In Help Join The Motley Fool
Free Article Join Over 1 Million Premium Members And Get More In-Depth Stock Guidance and Research
By Daniel Foelber - Jan 31, 2020 at 8:17AM

Can JetBlue’s hot start in 2020 continue?

JetBlue Airways (JBLU 5.77%) has had a hot start to the new decade. After an earnings beat last week and a competitive advantage as the only major U.S. airline that doesn't operate Boeing (BA 5.64%) aircraft, does JetBlue have more room to run over the long-term? 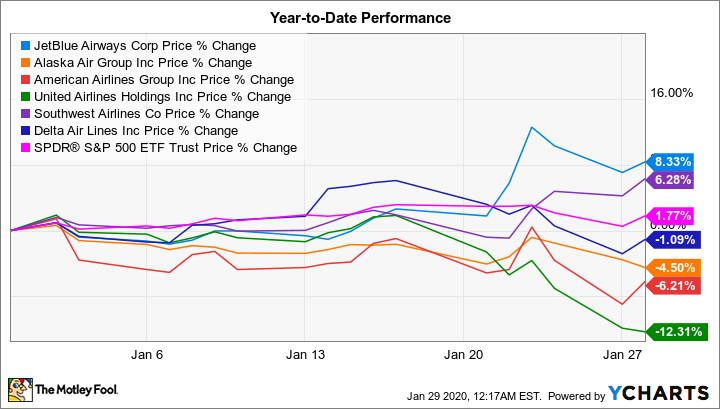 There was a lot more for investors to smile about than JetBlue's slight beat on fourth-quarter earnings. The biggest positive from the report was JetBlue's first-quarter 2020 revenue per available seat mile (RASM) forecast of 0% to 3% compared to Q1 2019. RASM is a key revenue metric for airlines. JetBlue had been struggling with RASM growth, posting a 2.7% decline in Q4 2019 compared to Q4 2018. That performance was in line with expectations of a 0.5% to 3.5% decline. What makes JetBlue's positive RASM growth even more impressive is that it comes during an expectedly low-growth year according to competitors United Airlines and Delta Air Lines.

On the earnings side, JetBlue reaffirmed its forecast of $2.50 to $3 earnings per share (EPS), which it had guided for in the third quarter of 2019. At the current price, JetBlue would have a foreword P/E ratio of 6.8 to 8.1, placing it in value stock territory from a valuation perspective.

In the era of Environmental, Social, and Governance (ESG) investment funds, companies that have a long-term focus on sustainability mean more than just a greener future. According to the Energy Information Administration (EIA), "petroleum products accounted for about 92% of the total U.S. transportation sector energy use" in 2018. Jet fuel made up 12% of the total fuel used in transportation. Airlines could become increasingly pressured to transition from jet fuel use in the future. JetBlue is attempting to be ahead of the curve when it comes to sustainability.

During the company's fourth-quarter 2019 call, CEO Robin Hayes said: "We are the first major US airline to announce carbon-neutral domestic flights. We have also procured sustainable aviation fuel for flight out of San Francisco, giving us early access to this lower carbon fuel ... positioning us to move faster on supply in the future." 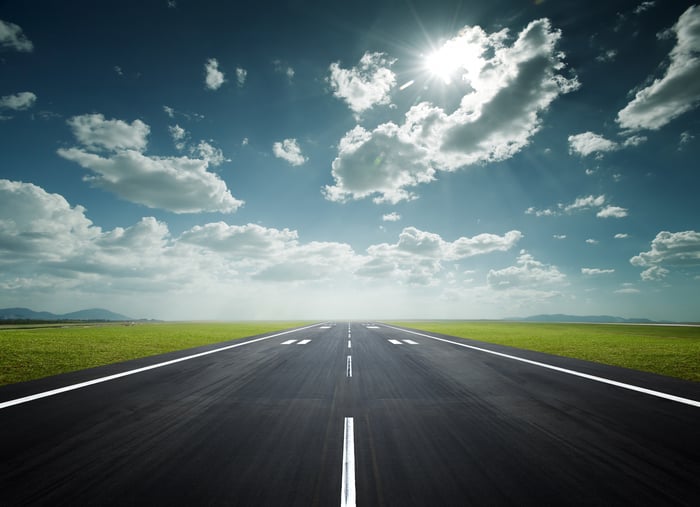 The impact of the Boeing 737 MAX groundings on Boeing and major U.S. airlines alike cannot be ignored. Fortunately for JetBlue, the company is the only major U.S. airline that doesn't operate Boeing planes in its fleet. Alaska Air Group, another smaller U.S. airline, as well as Delta, the largest U.S. airline by market capitalization, currently do not have grounded MAX planes either, but both fly Boeing planes in their fleets. As long as the MAX remains grounded, JetBlue will have an advantage over competitors who expected to have the planes operating in their fleet in time for the summer travel season. No one really knows when that will happen, but on Jan. 21, 2020, Boeing announced a further delay in its anticipated ungrounding of the 737 MAX, stating expectations for mid-2020. On Jan. 24, the FAA said it was "pleased with Boeing's progress in recent weeks toward achieving key milestones," signaling the ungrounding could come more recently than Boeing had expected.

Overall, JetBlue's fourth-quarter earnings were more of a relief cry in response to the prospect of finally growing RASM. JetBlue's short-term edge as an airline without exposure to Boeing's woes, as well as its long-term sustainability focus, provide an interesting combination. However, JetBlue's lack of a dividend may dissuade some income investors since other high-quality airlines pay a dividend. If JetBlue continues to grow RASM in a period of slow to mild growth for airlines, it could pull ahead as one of the better airlines to invest in.