Please ensure Javascript is enabled for purposes of website accessibility
Log In Help Join The Motley Fool
Free Article Join Over 1 Million Premium Members And Get More In-Depth Stock Guidance and Research
By James Brumley - Feb 1, 2020 at 9:31AM

If they're not broadband customers already, they're less likely to jump (back) into the AT&T ecosystem.

It's anything but a veiled secret that AT&T's (T -0.14%) cable television business in trouble. Last quarter alone, it shed another 1.16 million video customers, bringing its full-year attrition up to 3.43 million cable customers. The numbers extend a losing streak that began back in 2017. Investors weren't surprised, and AT&T wasn't concerned, either, seemingly certain that the upcoming nationwide launch of AT&T TV will turn its television fortunes around.

While analysts and investors debate the state of AT&T's video business, though, they're overlooking another red flag that could make the cable television matter moot. The telco giant is also now losing broadband subscribers, who are the company's best cable TV prospects. 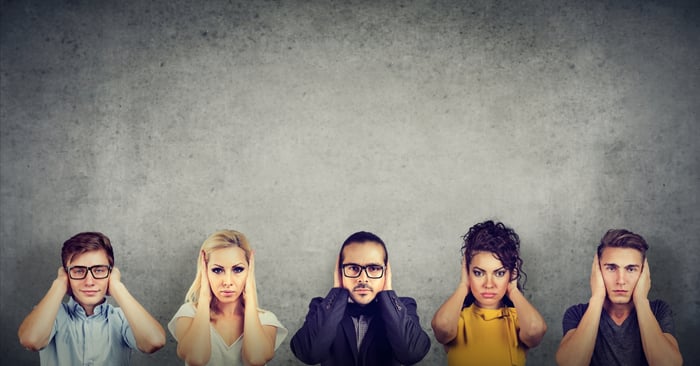 AT&T's television woes are well documented. Its 2015 acquisition of satellite cable name DirecTV has been a bust, but its over-the-top service called AT&T TV NOW (formerly DirecTV NOW) hasn't been any less disappointing. AT&T Communications CEO Jeff McElfresh explained in December that the company was prioritizing AT&T TV, jibing with previous comments from MoffettNathanson -- among others -- that AT&T TV NOW could eventually be shut down outright. AT&T TV is meant to be the new cable flagship, delivered entirely via the internet...even its live/linear programming.

There's just one problem with the premise, though. For a customer to enjoy their new AT&T TV service, they'll also need a broadband connection. Fewer and fewer consumers are paying AT&T for high-speed connectivity, though. The company lost 142,000 cable internet connections during the final quarter of last year and shed another 41,000 DSL customers, for a net loss of 182,000 accounts. That's the third straight loss of broadband customers, with each of those being more dramatic than the prior one. 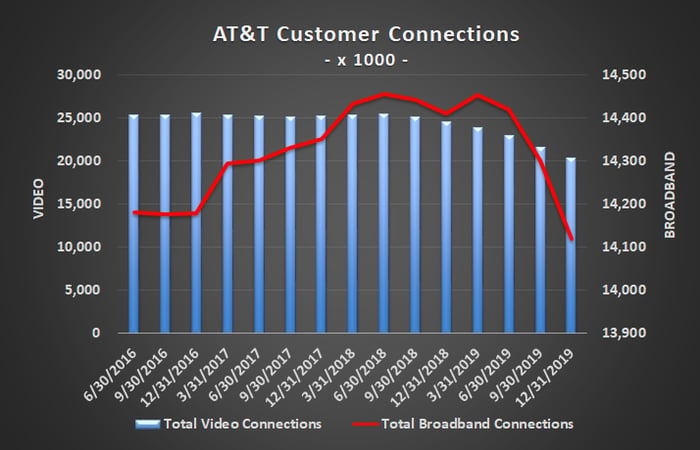 Investors can only speculate as to why AT&T internet customers are canceling. It's not a stretch, though, to suggest that consumers who decided they no longer wanted AT&T's cable television service also decided they didn't need AT&T's broadband service, either. The customer attrition trends sure look like they're starting to coincide.

If that's the case, the loss of broadband customers bodes poorly for the future of AT&T TV.

A problem unique to AT&T

The trajectories of AT&T's broadband and cable customer counts prompt a key question: Is it even possible to retain bundle customers once they decide to un-bundle? That is to say, will consumers bother subscribing to just one service from a telco provider? AT&T's anecdotal data suggests they won't, but AT&T's numbers contrast sharply with those from rival Comcast (CMCSA 0.07%).

Comcast is losing cable customers as well, for the record, shedding 149,000 television subscribers during the company's fourth quarter of 2019. Comcast's customers are decidedly unbundling their services, too. The number of Comcast customers with just one service, in fact, hasn't been higher in years thanks to the 671,000 cable TV customers that cut the Comcast cord last year. Its customers aren't bailing on the company's broadband business, though, with another 442,000 getting on board during Q4. It added 1.4 million of them in all of 2019. Verizon is also adding high-speed internet customers, even as it loses cable subscribers. Clearly one service can be sold without the other.

Comcast's success at least on one key front isn't just a coincidence. Though it too is moving away from winning cable customers at all costs only to suffer thin margins in trying to keep them signed on, it's proceeding strategically. It knows the business of traditional cable television is in permanent retreat, but it offers a slimmed-down, ad-supported cable service called Flex to its internet subscribers. Meanwhile, its NBCUniversal arm will soon launch an ad-supported streaming service called Peacock, available to all consumers regardless of who their broadband provider is.

It's possible AT&T's internet business has simply bumped up against a temporary headwind. It could snap out of it and revive growth going forward. Never say never.

Given the data at hand, though, such an assumption takes a sizable leap of faith despite the company's blue chip status. Until there's clear evidence to the contrary, investors have to be concerned that the deteriorating broadband business only makes the AT&T TV launch slated for February all the more challenging. If they're not AT&T internet customers, it's awfully easy for them to become a user of any other competing video service.