Please ensure Javascript is enabled for purposes of website accessibility
Log In Help Join The Motley Fool
Free Article Join Over 1 Million Premium Members And Get More In-Depth Stock Guidance and Research
By Alex Planes - Feb 5, 2020 at 6:00AM

IPOs have less upside than they once did. Bigger gains can often be found by buying established companies in transition.

The initial public offering, or IPO, was once a popular way to achieve massive returns for the average investor. This was never more true than in the 1990s, when an average of 409 companies went public each year, at an average market cap of roughly $600 million.

Since the dot-com boom went bust, IPO opportunities have somewhat dried up.

According to data from University of Florida Professor of Finance Jay Ritter, an average of just 117 companies went public per year throughout the 2010s.

Companies are now staying private longer, and raising far more capital through private markets before their IPOs, than those that went public in the late 20th century. As a result, many hotly anticipated IPOs start with massive valuations already baked in.

Over the course of the past decade, 87 IPOs raised at least a billion dollars. Where dot-com IPO news once focused on first-day gains, more recent IPO reporting has zeroed in on the sheer size of many newly public companies' market caps.

That said, IPOs as a whole haven't lived up to their hype. The average IPO gained 70% over the past decade. This sounds pretty sweet, but it seriously lags the S&P 500's 190% growth over the same period.

Today's IPOs might be more style than substance for investors, but a different stock-selection strategy can still provide the outsized gains IPOs were once known for.

That strategy: find companies executing a successful pivot. These businesses in transition often topped lists of the top-performing stocks throughout the past decade.

What is a pivot?

A pivot, in business parlance, is a substantial change to one or more components of a company's core business model. This typically happens after the company tests assumptions about its business model in the market and finds it's misjudged its opportunity, its audience, or both. 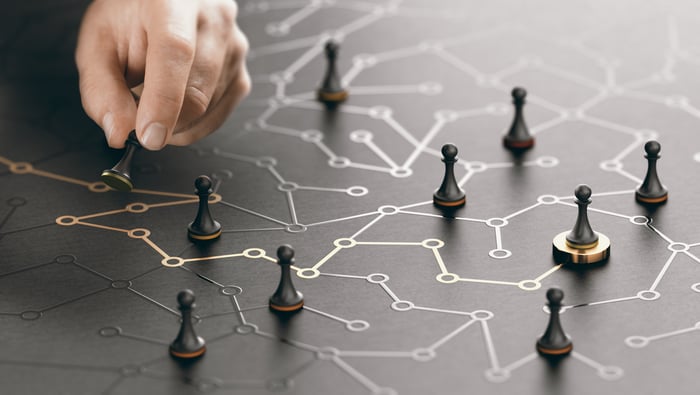 Startups can (and often do) execute pivots before going public. However, the current IPO market has funneled most of the gains from these early pivots to venture capitalists and other early-stage funders.

With fewer opportunities available to buy into a high-growth start-up before it goes public, it's become more important than ever to identify pivots in established companies.

To find out what types of companies were behind the market's best growth rates, I looked at several "best-stocks-of-the-decade" lists from the past several years.

Three companies showed up more than once, but only one dominated the 10-year growth charts in four of the past five years: Netflix (NFLX 5.03%).

You're probably familiar with Netflix's pivot from a DVD-by-mail service to a streaming-media giant.

This pivot happened in two stages. The first stage began with the 2007 launch of Netflix's streaming-video service and ran until 2013, when Netflix began producing its own content.

From House of Cards' 2013 launch to the present day, Netflix pivoted away from licensed content toward original productions. It now boasts well over 1,000 original titles, a number of which have won Oscars and Emmys.

And from what we can see, Netflix has been a better investment as a pivot than it was as an IPO.

If you can't beat 'em, pivot and join 'em

Amazon's pivots began earlier than Netflix's, but the company has been testing and building new lines of business for much of its life. It began as an online bookstore, but has morphed into an "everything" store, one with nearly 300 million square feet of worldwide operating space and $280 billion in annual revenue.

Along the way, the company has also built one of the world's largest cloud services providers (AWS), acquired a leading video game streaming site (Twitch), helped popularize the voice-activated virtual assistant (Alexa), and moved into the grocery business by buying out Whole Foods. Oh, and it's also built out a streaming service on Amazon Prime to rival Netflix, with some Prime-produced shows getting awards buzz of their own.

These expansions and acquisitions have made Amazon less an everything store and more an everything company, with ubiquitous products and services for an ever-increasing range of human activities.

A pivot with pizzazz (and pizzas)

Like Netflix, Domino's has been a better post-pivot investment than a post-IPO buy.

From its 2004 IPO to the start of the 2010s, Domino's shares were basically flat, as were its top and bottom lines.

Current CEO Patrick Doyle took the reins in 2010. His commitment to pivoting Domino's away from its doldrums made its stock the second-best investment of the 2010s, with total growth of 3,900%.

Doyle's strategy involved refocusing on technology and product quality, which helped Domino's improve earnings per share by over 850% in the 2010s.

In layman's terms, Domino's made it really easy to order and track a pizza online. It also listened to customers who said its pizzas sucked, and worked hard to improve its recipes.

Domino's customer experience has changed (and improved) so dramatically that it's practically a different company now.

Deregulation of private-market investing in the 21st century, and the heavy burden of going public, have kept many hot start-ups out of the hands from savvy stock investors. These changes have also made many start-ups that do go public less appealing as long-term buys.

However, you can still find great opportunities with existing companies transitioning to innovative new business models, like Netflix, or with companies taking a drastically new approach to their long-standing core businesses, like Domino's.

A pivoting company can at times be a risky investment, but the long-run upside can also be much greater than that of a multibillion-dollar IPO.