All businesses have to start somewhere, whether it's in a basement in the middle of rural America or a trendy loft in the heart of Silicon Valley. Many of today's most successful, well-known companies began as start-ups.

A start-up is a young business venture with the potential to experience rapid levels of growth. Start-up founders are often highly motivated, entrepreneurial individuals who have innovative ideas to solve problems no other product or service has tackled before. 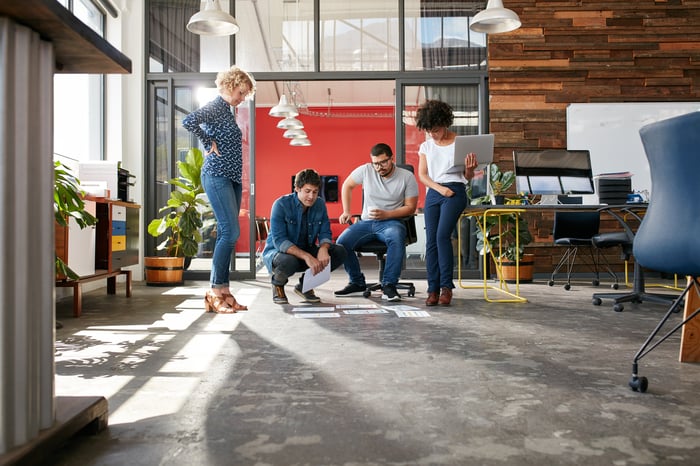 In their earliest stages, start-ups are frequently small, understaffed businesses that are financed and run by a core group of individuals, including their founders (or a single founder). What sets start-ups apart from other businesses, however, is their ability to scale very quickly and reach an ever-expanding consumer base.

Of course, not all start-ups are successful. In fact, according to the The Wall Street Journal, three out of every four start-ups ultimately fail. But those that do prosper often manage to make a lot of people wealthy in the process.

Some people tend to use the terms "start-up" and "small business" interchangeably, but they're not the same thing at all. Start-ups are early-stage ventures with the potential to explode. Many start-ups seek to be bought out by larger companies or go public; either scenario can mean a huge influx of capital. Small businesses, by contrast, aren't necessarily designed to grow quickly. In fact, many small businesses don't want to grow quickly. Rather, they simply want to focus on providing a particular product or service to a specific, and often limited, market.

Furthermore, whereas start-ups often seek funding from outside investors, small businesses are typically funded either by their own founders or by loans and grants from local lending institutions. As such, start-up founders must often answer to outside interests, whereas small-business owners have an easier time calling the shots and running their companies as they please.

How start-ups get their money

All businesses need money to grow, and start-ups are no exception. Start-ups might get their initial seed money from their founders, but because they tend to grow quickly, they often rely on venture capitalists to fuel that growth. Generally, when a venture capital firm agrees to finance a start-up, it provides a certain amount of funding in exchange for an ownership stake in the business. As such, it gains some degree of control over the way the business is run. And while that's a fact oft-bemoaned by entrepreneurs who'd rather work autonomously, start-ups frequently have no choice but to turn to VCs, because traditional bank financing can be harder to come by for a business with little to no assets.

The potential for success

Most start-ups, even the lucrative ones, tend to spend more money in their early stages than they actually bring in. And while the majority of start-ups ultimately end up folding, those that succeed tend to prosper in a very big way. Take Facebook (NASDAQ: FB), for example: It's only been around for 14 years, yet in July 2015, it reached a $250 billion market cap faster than any other S&P 500 in history.

Whether you're looking to invest in a start-up or work for one, you should understand the risks and benefits involved. While the failure rate among start-ups is high, there's always the chance that you'll find that one groundbreaking company that really takes off. And if you do, the upside can be huge.