There were several high-profile IPOs last year, and Uber (NYSE:UBER) was arguably the most highly anticipated of the bunch. Some viewed the ridesharing behemoth as an automatic buy given its leading position in a highly lucrative -- and growing -- industry. However, Uber's stock didn't perform well after its IPO, and the company's shares slid by 28.5% last year. There were several reasons Uber's performance was so poor. First, the company was losing money rapidly. For instance, Uber recorded a net loss of $5.2 billion during the second quarter and another loss of $1.2 billion during the third quarter. To make matters worse, there was, at that point, no reason to expect the company to become profitable anytime soon.

Second, the regulatory landscape surrounding Uber's operations was becoming less welcoming. For instance, last year the state of California enacted a law -- dubbed AB5 -- that requires Uber to start treating many of its drivers as employees. In other words, many Uber drivers in California are now entitled to the same benefits as other fully fledged employees, such as minimum wage, paid time off, and sick leave. This new law will likely lead to an increase in Uber's expenses. Given such issues, Uber had a lot to prove when it released its fourth-quarter and full-year 2019 earnings report, and the company's financial performance, as well as its guidance for the current fiscal year, was enough to make investors happy. 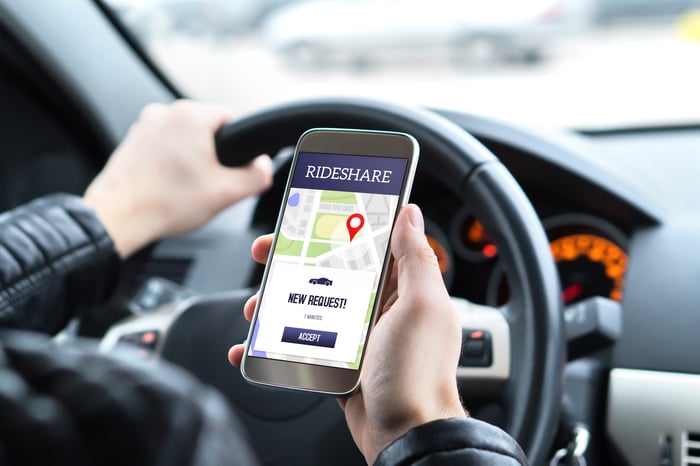 Uber made some headway during the fourth quarter, and the company delivered strong financial results across the board. Here are some key metrics to consider:

While Uber continues to record deep losses, the company announced some news on that front that resonated with investors. During the company's fourth-quarter earnings conference call, Uber's CEO declared that the company was aiming to be profitable on an EBITDA (earnings before taxes, expenses, depreciation, and amortization) basis by the fourth quarter of its current fiscal year; this is after the company emphasized the importance of profitable growth (as opposed to growth in spite of deep losses) in the press release announcing its fourth-quarter and full-year results. Note that in a recent earnings conference call, Uber had announced its plan for EBITDA profitability for its full fiscal year 2021. But the company now believes it can achieve that goal ahead of its initial projection.

Is this the turning point?

First, let's give credit where credit is due. If Uber can pull off becoming profitable on an EBITDA basis by the fourth quarter of the current fiscal year, it will be a significant step in the right direction. The company plans on doing so by improving its Uber Eats business, which accounts for a substantial percentage of its losses. During the fourth quarter, Uber Eats' adjusted EBITDA was negative $461 million, and this loss had widened by 66% year over year. Meanwhile, Uber Rides recorded an EBITDA of $742 million, up 281% compared to the prior-year quarter. Uber plans on divesting some of its operations within its Uber Eats segment while focusing on markets where it can achieve a "leading position."

For instance, during the fourth quarter, Uber sold its India Eats business to a popular app in the region called Zomato. Investors can expect Uber to continue trimming its Uber Eats business, which should help the company achieve its profitability goal and perhaps finally perform like the top growth stock many thought it would be. That being said, being profitable on an EBITDA basis isn't the same as being profitable per se, and although Uber seems to be making the right moves, I'd caution investors to stay on the sidelines for now while keeping a close eye on the company.

Is This the Turning Point for Uber? @themotleyfool #stocks $UBER Next Article
Current