Please ensure Javascript is enabled for purposes of website accessibility
Log In Help Join The Motley Fool
Free Article Join Over 1 Million Premium Members And Get More In-Depth Stock Guidance and Research
By Jon Quast - Mar 3, 2020 at 7:30AM

The market selloff presents many buying opportunities, including these three top-notch businesses.

It finally happened. The market last week entered what's known as "correction territory" -- down more than 10% from all-time highs reached in early February.

Volatility and corresponding fear abound, but seasoned investors like Berkshire Hathaway CEO Warren Buffett love pullbacks like this because they offer opportunities to find good businesses available at sale prices. But Buffett isn't looking for just any deal. He has a certain type of company with the right characteristics in mind for his bargain shopping forays.

With that stock-buying understanding as a basis, here are three Warren Buffett stocks that are worth buying right now. Buffett and his company own shares in all three of these companies and now might be the right time for you to as well. 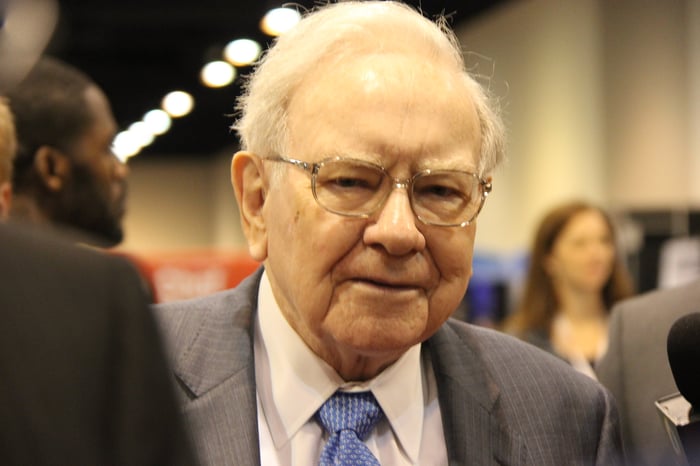 Prior to Monday's partial recovery, iPhone-maker Apple (AAPL 1.62%) was falling harder than the rest of the market -- approaching 20% down from February highs. This drop is partially reasonable, as the company recently issued negative guidance related to the COVID-19 outbreak. In the upcoming second quarter, Apple doesn't anticipate reaching its previous revenue guidance of $63 billion to $67 billion. In China, work production has slowed and retail stores have closed, disrupting both supply and demand for its products.

However, its best to keep Apple's updated Q2 guidance in perspective. Investors' time horizon should extend far beyond whatever happens over the next three months. Consider that Apple has 1.5 billion active installed devices in the world right now -- Apple products that are currently being used. That unprecedented customer base won't evaporate in Q2. It's true that fewer people might buy a new device or upgrade right now, but long-term, Apple is a beloved brand that consumers won't abandon overnight. This is a supply disruption, not a demand problem.

This technology giant has several growth drivers as we look ahead three to five years. Some investors are excited about Apple's nascent video-streaming service, and others are anticipating the release of virtual and augmented reality consumer products. The headlines have also speculated that the launch of 5G networks will potentially spark an iPhone sales "supercycle" in 2020.

But it's the prospects of Apple Pay, the company's service that allows payments with an Apple device instead of a credit card, that get me excited. In the first quarter, CEO Tim Cook shared that the transactions run-rate now exceeds 15 billion annually. For perspective, that's more transactions than what PayPal processed in 2019, and it's what drove a record $12.7 billion services segment revenue in Q1. This high-margin revenue will drive Apple's profitability in the coming years, and make this company a top war-on-cash investment candidate.

Speaking of the war on cash, Mastercard (MA 0.88%) is another Warren Buffett stock worth buying right now. The stock is down, in part, due to the broad market sell-off. But investors were also caught off guard with the announcement that longtime CEO Ajay Banga will step down from his position at the end of the year. Chief product officer Michael Miebach will be promoted to replace him.

Mastercard's revenue is up over 50% in the last three years, including 16% annual growth in 2019. However, expect revenue growth to slow significantly in the short term. The company has issued revised guidance for the first quarter of 2020, saying that growth will slow to 9% to 10%. It's not surprising, considering payment volume is directly correlated to macro-economic trends.

Wall Street doesn't really like changes like this, especially at the moment. But I suspect this executive shakeup and revised guidance will be quickly forgotten, and investors will remember why this stock is up (even with its recent drop) around 150% over the last three years. Consider that in its earnings call, management was guiding for Q1 to be the slowest quarter for revenue growth in 2020. So investors should still expect double-digit revenue growth in the year.

Furthermore, earnings-per-share (EPS) growth outpaced revenue growth in 2019 at 28% year over year. This was driven by operational efficiency and a modest boost from share buybacks. I expect this superior earnings growth to continue going forward. And with the stock sell-off, Mastercard is approaching a 30 times price-to-earnings ratio -- one of its cheapest valuations over the last three years.

E-commerce giant Amazon (AMZN 3.15%) needs no introduction. Its largest revenue source is North American sales, which grew 21% year over year in 2019. At $171 billion in trailing-12-month North American net sales, Amazon and its speedy shipping are becoming an increasingly indispensable service. But again, investors fear that the coronavirus could disrupt Amazon's inventory, as many products are sourced from China.

There are valid reasons for concern, but Amazon is taking a very proactive approach to solving this potential problem. According to The New York Times, the company is stocking merchandise for six to eight weeks, more than what it typically has on hand. While there's still so much unknown with COVID-19, two months of supply might be enough to avoid depleting its inventory. Some reports show that the disease is slowing in China and that people are already returning to work.

Even if Amazon faces a temporary inventory challenge, with over 150 million Prime members, its pretty likely long-term demand will continue. But another reason to consider Amazon now that it's trading lower is Amazon Web Services (AWS). Cloud computing only made up 12% of revenue in 2019, but it grew 37% year over year. What's more, it provided 63% of Amazon's operating income.

AWS revenue isn't as likely to be affected by what is going on right now, meaning the growth story is intact. Some believe this segment could even double from here in the next two years. Should that show signs of happening in coming quarters, I expect investors will return to Amazon's stock. So, just like Amazon is proactively stocking its shelves, you may want to proactively stock your portfolio with Amazon.