Please ensure Javascript is enabled for purposes of website accessibility
Log In Help Join The Motley Fool
Free Article Join Over 1 Million Premium Members And Get More In-Depth Stock Guidance and Research
By Rick Munarriz - Updated Mar 26, 2020 at 9:17AM

The chips are down, but these display-chip stocks may not be down forever.

It's not a surprise to see bargain hunters circling some of the former high-flying chip stocks. NVIDIA (NVDA 3.04%) and Himax Technologies (HIMX -8.85%) are trading 22% and 46% off their recent highs, respectively. If you liked them at their February peaks, you may like them even more now, a month later, at dramatic markdowns.

The two companies specialize in display semiconductor solutions, but they are leagues apart in terms of most investor measuring sticks. The differences start at the weigh-in, with NVIDIA and its $150 billion market cap clocking in 300 times larger than Himax at less than $500 million. NVIDIA is profitable; it pays out a small dividend.

But we shouldn't dismiss Himax out of the gate just because it's substantially smaller. One of the benefits of living outside of the market's radar is that Himax trades at a much lower top-line multiple. It fetches a 0.8 revenue multiple to its enterprise value, a lot less than NVIDIA at more than 13 times trailing revenue. Himax scores a point there, but it may not be enough. 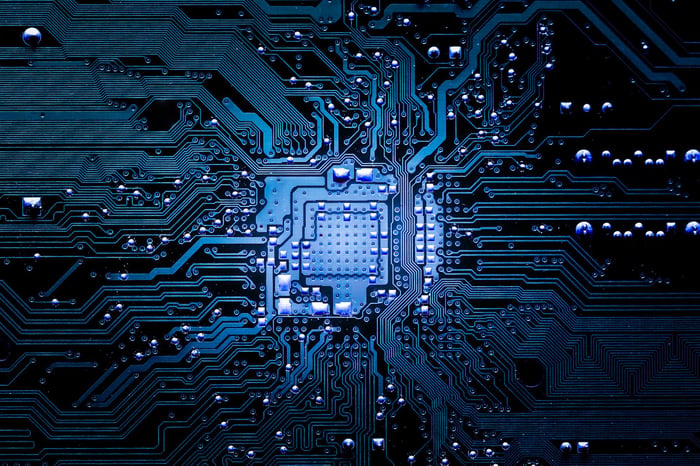 Laying the chips out on the table

We pitted Himax against NVIDIA five times with five different Motley Fools chiming in between 2017 and 2018. I figured NVIDIA would be the runaway winner, and that was the case in all but one of the bouts.

Is the nearly unanimous love for NVIDIA warranted? Let's take a closer look, starting with our underdog, Himax. It's hard to get excited at first glance. Revenue has declined in three of the past five years, and that includes a 7% slide in 2019. Its latest quarter may not seem any better, with revenue declining 8% since the prior year, as modest gains in small and medium display drivers were more than offset by a 22% drop in large display drivers. However, this better-than-expected showing was a sequential uptick on the top line, an encouraging sign for a cyclical business.

Guidance calls for yet another sequential uptick, and just as importantly an 8% to 18% year-over-year increase. Obviously it's a whole new world since COVID-19 rocked and stalled the world. Himax was starting to gain momentum with its smartphone, tablet, and automotive display lines after a bad year, but that's no longer a given.

NVIDIA has a much stronger track record of growth. It was coming off of three straight years of better than 20% top-line growth before proving mortal with a 7% decline last year (matching Himax). It also impressed investors with its latest quarter.

NVIDIA is substantially larger than Himax. It's best known for its graphics processing units (GPUs) that are the heart of the graphics cards for desktop computer gaming, but it also has a knack for riding hot trends from self-driving cars to smart homes. It's feasting these days on data centers and artificial intelligence.

It's tempting to side with Himax, given its substantially lower revenue multiple. It took a hit that was twice as large as NVIDIA did since both stocks hit fresh highs last month, and that gives it more upside if stocks continue to bounce back. But NVIDIA, with its cash-rich balance sheet and stronger track record, is the better buy. I can't play contrarian here. I'll side with the majority of my fellow Fools and give the nod to NVIDIA as the better tech stock.