A stunningly-quick rise in COVID-19 cases and the earliest bits of economic data paint a bleak picture.

Shares of high-end retailers Nordstrom (JWN -0.57%), Tapestry (TPR 0.47%), and Williams-Sonoma (WSM -0.88%) fell sharply along with many other stocks on April 1. A strong rally over the past week came to an end as investors adsorbed the harsh reality that the coronavirus pandemic is hitting harder than some expected.

The broader stock market fell hard today, with the S&P 500 shedding 4.4% at the close. In any other time, today's 4.4% drop for stocks would easily be one of the worst -- likely the worst -- days for stocks that year. But in the current market, the most volatile in many decades, today's sell-off is simply the worst day in the past two weeks. 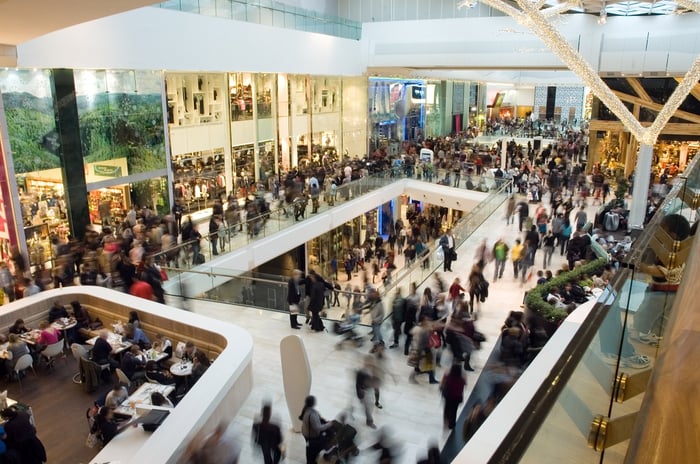 Today's drop comes after nearly a week when stocks had rallied. The S&P 500 gained 20% between March 23 and March 30, before yesterday's minor sell-off turned into an April 1 rout. Markets are turning back sharply to selling, in short because the outlook is getting scary.

COVID-19 cases in the U.S. surpassed 200,000 today, and health officials are warning that the next several weeks could be devastating. Based on recent rates of infection, the health risks, and the pressure the healthcare system will be under, some health experts are warning that close to a quarter-million Americans could die within weeks.

In addition to the terrible health toll and loss of life COVID-19 could be responsible for, the U.S. economy has already been ground to a halt in attempts to slow the spread. Manufacturing activity and orders for new goods have already begun to fall, increasing the likelihood that the U.S. is already in recession.

Nordstrom, Tapestry (parent company of Coach and others), and Williams-Sonoma are already feeling the pressure, with their retail operations shuttered under state orders for non-essential businesses to remain closed. As the COVID-19 crisis grows more intense, the length of these closures will continue creating pressure on these companies, which will have little by way of revenue, and will have to count on existing cash and equivalents and credit facilities they can tap.

Tapestry recently said it would draw $700 million from a credit facility and is looking for ways to cut costs. As a result of its financial state and the prospects it could be months before it can reopen stores, Rating agency Fitch downgraded Tapestry's debt to junk.

Nordstrom similarly saw Fitch lower its credit rating, but it's still considered investment-quality because of the company's stronger balance sheet, which carried $850 million in cash it would grow by $800 million it planned to draw down from a credit facility.

Williams-Sonoma also has a relatively strong balance sheet, with $432 million in cash and equivalents at quarter-end, versus less than $300 million in debt and a strong credit rating of its own.

There's no mistaking the reality that the next few months are likely to be brutal for these top-shelf retailers. Between many more weeks of store closures ahead, and what could be a continued deep recession when bans are lifted and stores reopen, it could be later this year -- or even into 2021 -- before business returns to normal.

But you can bank on it; things will eventually return to normal. And when they do, there will likely be some pent-up demand for the goods these retailers sell, or even just pent-up demand from millions of consumers who've spent extended periods of time under stay-at-home orders. Humans are social animals, and part of the modern human experience includes conducting commerce face-to-face.

That's not to say that the worst is behind us for these three retailers: To the contrary, today's sharp decline could very well prove to be just one in many to come. Business certainly isn't going to pick up anytime soon.

But with their stocks down between 51% and 68% of their pre-crash highs, investors do have a watermark for the kinds of returns you could earn when things do return to normal in a year or two, or possibly even longer. It could get worse before it gets better, but today's prices will likely prove to be winning investments for people willing to treat these as multi-year investments.