Shares in United Technologies (RTX -1.12%) fell a whopping 27.8% in March, according to data provided by S&P Global Market Intelligence. The fall comes as the market digests the havoc wrought on the commercial aviation sector by the measures taken to contain the COVID-19 pandemic. Unfortunately, as an aerospace component supplier and engine manufacturer, United Technologies is one of the companies most at risk.

It's an outcome that couldn't have come at a worse time for United Technologies, because it very recently spun off its elevator business Otis, and its heating, ventilation, and air conditioning company Carrier in order to merge with defense company Raytheon in a newly formed company called Raytheon Technologies (NYSE: RTX). 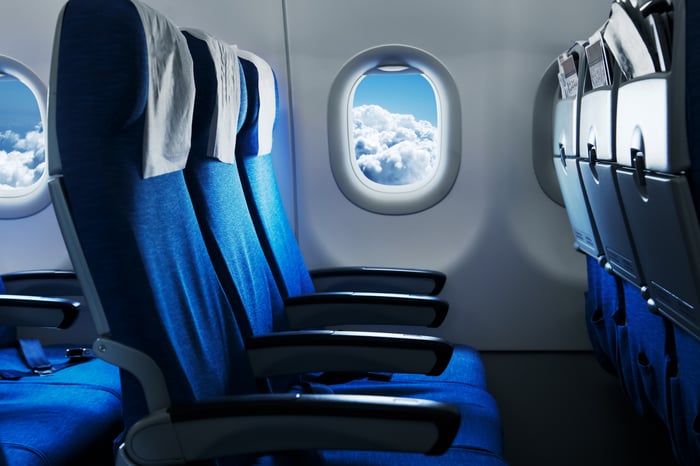 The International Air Transport Association (IATA) now estimates that industrywide passenger revenue could fall by $252 billion in 2020, representing a 44% fall in 2019. The decrease is a consequence of travel restrictions imposed in order to contain the novel coronavirus. It's worth noting that, at the start of March, the IATA was predicting a hit of just $29.3 billion, only to increase it to a range of $63 billion to $114 billion in the first week of March.

The reason the estimated losses have been increasing so dramatically comes down to travel restrictions being ramped up in response to the COVID-19 pandemic. Many governments were caught by surprise by the scale of the internationalization of the outbreak from its origin in China.

Given the rapidity of the decline in the outlook for the aviation industry, it goes without saying that the outlook for UTX, and de facto Raytheon Technologies, will be worsening too.

The swing factor in the prospects for the newly created Raytheon Technologies is going to be the legacy United Technologies aerospace businesses -- specifically, Pratt & Whitney aircraft engines and Collins Aerospace aerostructures and avionics.

In turn, their prospects will be determined by the duration of the travel restrictions and the state of the industry when passenger traffic starts the process of normalizing. It's a highly dynamic process, and impossible to accurately predict. Risk averse investors will surely wish to avoid the sector until the outlook becomes clearer.