Please ensure Javascript is enabled for purposes of website accessibility
Log In Help Join The Motley Fool
Free Article Join Over 1 Million Premium Members And Get More In-Depth Stock Guidance and Research
By James Brumley - Apr 7, 2020 at 11:26AM

The coronavirus outbreak could act as the breaking point for a consumer loan business that was already being stretched thin.

The record-breaking $1.3 trillion worth of auto loan debt Americans are collectively shouldering is starting to show some serious cracks. As of late last year, auto loan delinquencies were at an eight-year high, and suspiciously, that was right around the same time the number of rejected auto loan applications jumped. That's despite one of the best -- and best-paying -- job markets on record.

It's anecdotal evidence of a brewing problem likely to be worsened by the coronavirus pandemic. With millions of people newly out of work and countless more adversely affected by the economic slowdown, even more car payments could start to be skipped as incomes and credit scores sink hand in hand.

That puts all lenders on notice, but could prove particularly problematic for Credit Acceptance (CACC 1.86%), Santander Consumer USA Holdings (SC), and Ally Financial (ALLY 5.76%), each of which relies heavily on auto lending.

A superficial look at the global economy as of last year was encouraging. In retrospect, though, things may not have been as strong as they seemed. The American Bankers Association reported in January that, as of the end of the fourth quarter of last year, 2.43% of auto loan recipients were at least 30 days late on their payments. That's the highest rate since 2011 when most consumers were digging their way out of 2008's economic implosion. 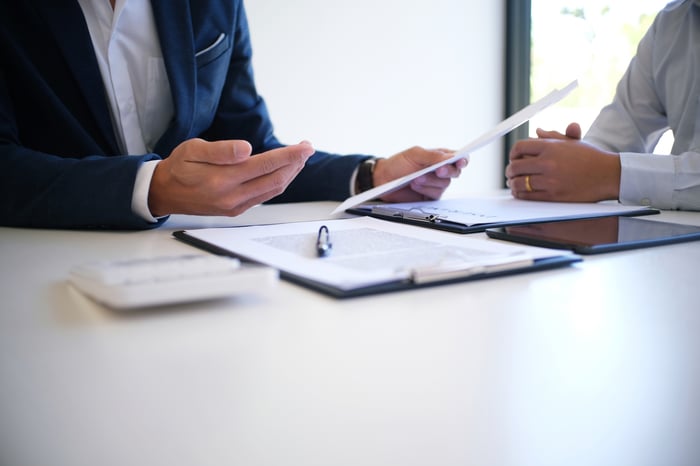 Lenders responded by tightening their purse strings. The New York Federal Reserve noted by the middle of last year that rejection rates for car loan applications had soared, up from 4.5% in October of 2018 to 8.1% as of October of 2019.

Consumers haven't exactly been helping themselves. Automobile market data outfit Edmunds noted that as of March -- for the first time ever -- the average term of a car loan exceeded 70 months. That's 5.8 years, and it makes it likely most loans will be "upside-down" for much of that 70-month stretch, meaning the owner will owe more than the then-used vehicle is worth. They're paying a fortune for those vehicles too, with more than $34,000 typically being financed to buy a new vehicle last month. That's another record that has led to record-breaking average monthly payments.

If all this news rings familiar, there's a reason. Though it's not as dramatic as the real estate frenzy from 2008, the underpinnings of what turned into the subprime mortgage crisis are the same. The COVID-19 outbreak may be what pops the bubble -- if it hasn't already.

Most banks and credit unions offer car loans, but a trio of dedicated consumer lenders are exceedingly exposed to the industry.

Ally is one of those names. To its credit, Ally is providing relief for customers affected by the coronavirus outbreak. Borrowers can defer payments for up to 120 days, and it's waving some banking and stock-trading fees. Still, about 85% of Ally's operating income last year came from car loans, leaving it highly vulnerable to the prospect of a job-taking recession. Bolstering that risk is Ally's recent news that it essentially doubled its loan purchase partnership with automobile sales chain Carvana (CVNA 14.19%). All told, Ally has committed up to $2 billion to help Carvana sell cars by letting the lender take care of those underlying loans.

Ally is hardly the only name that may suddenly be on the hook, however. Santander Consumer USA Holdings is one of the nation's biggest auto lenders as well, and caters to subprime customers (borrowers with less-than-great credit).

Like many lenders did back in 2008, Santander will sometimes package a bundle of auto loans into a single bond-like instrument. When one series of that debt failed to pay its new owners as expected last year, however, the lender was forced to buy back that bundle of poorly performing debt just shortly after it was sold. Debt-rating agency Moody's believes Santander only verified the income for about 3% of the borrowers lumped into that bundled product, which leaves other asset-backed securities based on car loans a bit suspect.

Credit Acceptance is another subprime auto lender, but one with a twist. It's also a collection agency on loans it makes that go unpaid. As of the last quarter of last year, its forecasted collection rate of all money due -- principal, interest, and any associated fees -- was at a 10-year low of 64.8%, after steadily declining from 77.7% in 2010. Total loan volume per dealer as well as partnered-dealer growth were all down during the third fiscal quarter, jibing with CEO Brett Roberts' comment during the Q&A portion of the Q4 conference call: "We've been in a very, very competitive period for a long time, really since late 2011, 2012. It appears that the competitive environment has gotten more intense recently."

The COVID-19 outbreak may only further intensify that competition.

These aren't the only three auto lenders out there, to be clear. They're the big names in the subprime sliver of the automobile lending market, though, which is likely to be the piece of the market that implodes first. Underscoring this possibility is the fact that even before the coronavirus contagion took hold, the auto lending industry was starting to unravel.

That didn't slow vehicle purchases down much earlier this year. In fact, consumers arguably went car crazy in March. The swell of outrageous car loans may have been the proverbial last hurrah, however, setting up a meltdown that would surely be augmented by the onset of a recession. As was the case with mortgages in 2008, subprime car loan problems could eventually bleed over into the prime and above-prime market.