Please ensure Javascript is enabled for purposes of website accessibility
Log In Help Join The Motley Fool
Free Article Join Over 1 Million Premium Members And Get More In-Depth Stock Guidance and Research
By James Brumley – Updated Apr 13, 2020 at 8:51AM

The previous one didn't boost economic growth (or even carmakers) in the long run, and this time around, weak demand is rooted in something very different.

The underlying premise sounds reasonable enough: Encourage consumers to buy new cars with generous subsidies to sell their older ones, and as a result, you'll give the U.S. economy a much-needed shot in the arm. From that perspective, the recently floated idea has plenty of support, from Ford Motor (F -3.60%) U.S. sales chief Mark LaNeve in particular.

The proverbial fly in the ointment: The theory doesn't quite hold water. A closer look at the so-called Cash for Clunkers program implemented back in 2009 suggests the initiative didn't actually drive the purchase of more cars or even give the economy a jolt. It simply compacted sales that would have materialized anyway into a very narrow time frame.

And this time around, there are even fewer actual clunkers on the road than there were then. 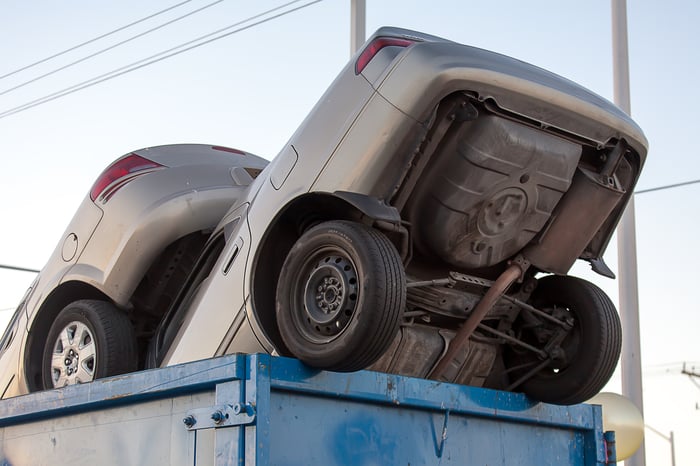 "We think some level of stimulus somewhere on the other side of this would help not only the auto industry and our dealers, which are a huge part of our overall economy, but will help the customers as well," explained Ford's LaNeve in a recent interview. He added, "We're in discussions about what would be the most appropriate."

At the time he said it, Ford had not yet spoken with representatives of the U.S. government, which is busy dealing with the coronavirus outbreak that's stymied auto sales in the first place. Sales of consumer-oriented cars and trucks fell from February's annual pace of 16.8 million to a clip of 11.4 million in March, down by about one-third year over year, according to numbers from the American Institute of Economic Research. That translated into a 7.1% decrease for General Motors' (GM -5.08%) U.S. business in the first quarter. Ford's was off to the tune of 12.5% for the same three-month stretch, says Car and Driver. Fiat Chrysler's (FCAU) fell 10.4% in the U.S. The consensus outlook for April is pretty ugly as well. 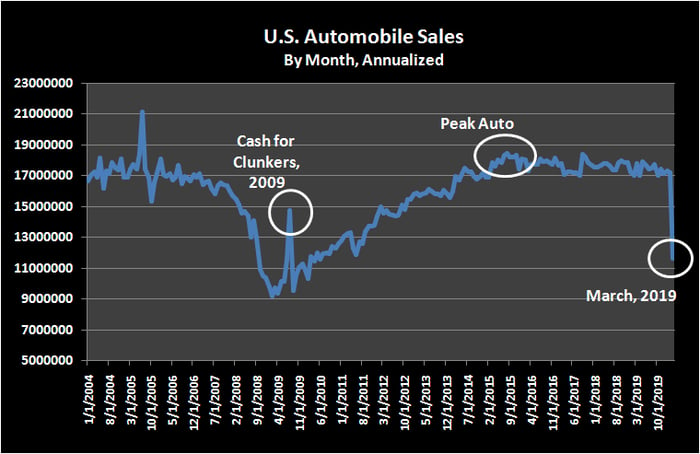 With numbers like those, it's not difficult to understand Ford's interest in doing something -- anything -- to rekindle buying interest. If a 2020 Cash for Clunkers is anything like 2009's version, though, it might do little actual economic good.

That's the conclusion three economists from MIT and Texas A&M came to in 2014, anyway.

In short, their study indicated "nearly 60 percent of the subsidies went to households who would have purchased during the two-month program anyway; the rest accelerated sales by no more than eight months." The report, published by the National Bureau of Economic Research, even suggests by 2010, the program that encouraged the purchase of low-cost cars ultimately hurt the automobile manufacturing industry's top line.

In no position to wheel and deal

Take the report with a grain of salt. There's always some sort of unknowable X factor in play. Perhaps in 2009, the Cash for Clunkers program -- technically called the Cars Allowance Rebate System -- generated confidence that helped pull the economy out of the recession.

On the other hand, the underpinnings of the 2009 program's failings might be even more problematic this time around, for a couple of reasons. Chief among them is the simple fact that the average car on the road in America today isn't apt to be an undesirable vehicle.

The profile of the typical car still in use in the U.S. doesn't exactly jibe with that idea at first glance. At an average age of just under 12 years, according to IHS Markit, our vehicles have never been older. The average age was only around 10.3 years back in 2009. Many of us are seemingly overdue for a new vehicle.

A 12-year-old automobile in 2020 is arguably still a higher-quality vehicle than a 10-year-old car was back in 2009, however. As IHS Markit's Director of Global Automotive Aftermarket Mark Seng explained of the organization's calculations last year, "The quality is higher, lasting longer, withstanding the weather."

Consumers also have more money and longer-term loans tied up in their current collection of vehicles, perhaps committed to cars they can't actually afford. Car and Driver noted earlier this month that auto industry research outfit Edmunds estimates the average length of a car loan as of March reached a record-breaking 70.6 months. That time frame makes it much easier to go "upside-down" on a loan (when the outstanding balance is more than the vehicle is actually worth) no matter how generous a government program might plausibly be.

Never even mind the fact that much of Ford's, GM's, and Fiat's business is done outside of the United States, where governments may not be as interested in stimulating consumerism.

Only a breakdown will do

So if not a Cash for Clunkers 2.0, then what might actually get the automobile market going again? Obviously more demand, but the matter is hardly that simple.

Cars are a cyclical business, closely tied to the nation's and the world's ongoing expansion and contraction phases. The expansion phase we're in right now is much like the record-length bull market we've been in since March of 2009: It's arguably gone on too long for its own good. Consumers ramped up car purchases coming out of the subprime mortgage meltdown and subsequent recession, driving into a frenzy of purchases in 2015 that's since come to be known as "peak auto," as good as things get for the car business. They've not been bad in the meantime, but anybody who wanted a new car likely has one at this point. Disinterest more than inability may be the bigger roadblock to the industry's rebound in 2020.

To that end, it might take a true recession to get automakers back to a point at which that's even possible. It's a prospect with more overall downside, obviously.

The good news is that it wouldn't require a devastating cyclical slowdown to hit the proverbial reset button. A modest, manageable one would do. Still, it looks like the industry is in for a rough ride one way or another, with or without another Cash for Clunkers.