Please ensure Javascript is enabled for purposes of website accessibility
Log In Help Join The Motley Fool
Free Article Join Over 1 Million Premium Members And Get More In-Depth Stock Guidance and Research
By John Rosevear – Apr 21, 2020 at 7:04AM

It has almost no revenue right now. How long can Ford hang on?

Ford Motor (F -0.67%) has closed most of its factories around the world. With its factories closed, it isn't shipping any cars or trucks, and it isn't generating much revenue.

But Ford still has huge expenses. In fact, I estimate that it's burning around $165 million a day right now.

On top of that, Ford has suspended its dividend, which was a big reason many investors owned the stock.

Is it time to sell? Let's take a look under the hood. When it's running at full speed, Ford's Dearborn Truck Plant builds a new F-150 pickup every 53 seconds. It's probably one of the most profitable auto factories in the world. But right now, it isn't running, and Ford is bleeding cash. Image source: Ford Motor.

That $165 million per-day figure is a back-of-envelope estimate, of course. But it's in the right ballpark. Ford said last week that as of April 8, it had about $30 billion in cash, and that it was enough to keep the company afloat through at least the end of September.

From early April through the end of September is roughly 26 weeks. If we divide $30 billion by 26 weeks, and then divide that number by seven days in a week, we get about $165 million a day -- or $1.15 billion a week, if you'd prefer to think of it that way.

I expect that Ford will give us more details when it reports its first-quarter results on April 28, but here's what we know now:

OK, Ford has already burned $7.7 billion. Where did it go?

We know that Ford will report a net loss of about $2 billion for the first quarter. We also know that Ford had to unwind its working capital after its factories closed in mid-March, which probably accounts for much of the remainder.

Here's an example that will help explain what that means. In normal times:

When Ford's factories stopped mid-month, it stopped recording revenue -- but it still had to pay suppliers for the parts and raw materials it had used earlier. To pay those bills without revenue coming in, Ford had to dip into its cash reserve.

Given that all of Ford's factories outside China were closed by early April, it's not hard to see how that could have quickly accounted for $5 billion or more of Ford's cash.

(By the way, Ford now has even more cash. It issued new bonds last Friday, raising about $8 billion.)

Ford isn't buying parts to build cars at the moment -- except in China, where its factories have restarted. But it is still paying salaries and benefits for its salaried employees, paying utility and maintenance bills, amortizing things like factory tooling, paying interest on its debt, and so on and so on and so on -- all the costs that remain when a giant multinational corporation suddenly stops generating revenue.

So is it time to sell Ford?

I think Ford might be a buy right now for an investor who is willing to be patient. As I explained in much more detail on Sunday, Ford has plenty of cash to weather the coronavirus storm, and plenty of new products in its pipeline to tempt buyers once the U.S. and European economies start to recover.

Longtime auto investors will recall that Ford's stock surged early in the recovery after the 2008-2009 recession. That surge happened because Ford had fresh products in showrooms while its rivals were still trying to get back on their feet. Ford's sales and earnings jumped, it gained market share, and the stock took off: From its low point in late 2008 through the end of 2011, it rose over 1,000%. 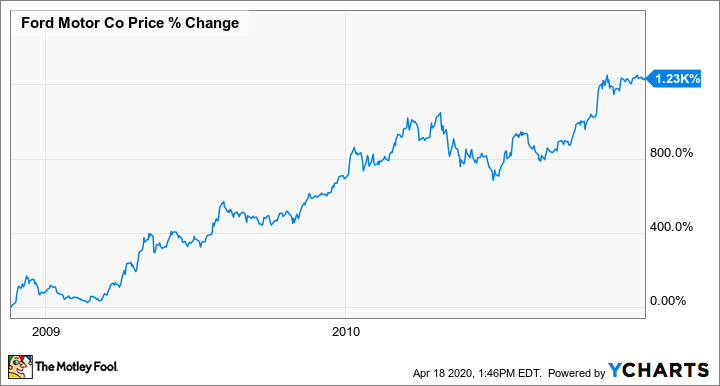 F data by YCharts. Chart shows the percentage change in Ford's stock price from November 19, 2008, through the end of 2010.

To be clear, I don't think you'll get another ten-plus-bagger by buying Ford this time around. For starters, it hasn't fallen nearly as far as it did in 2008, and I think that many of its rivals will be better prepared for the recovery this time around than they were in 2010.

But I also think that the all-new F-150 that Ford planned to launch late this year (and still might) will be a powerful margin-booster for the company -- and it, along with the all-new Bronco and some other profitable new Fords, could arrive at dealers just as things are getting back to normal.

Long story short: You might not get a ten-bagger, but if you own Ford, and you can afford to be patient, there's a good chance you'll still be well rewarded if you hang on.