The world's largest defense contractor beats on earnings and remains upbeat on the full year.

Lockheed Martin (LMT -0.40%) shares were not immune to the COVID-19 pandemic sell-off, with the stock falling more than 30% from mid-February to mid-March, but the shares have been marching steadily higher in recent weeks as earnings season approached.

In its first-quarter release, the company justified investors' faith in the business and made a strong case for why Lockheed Martin is a good stock to consider if the U.S. economy is, as feared, headed toward a pandemic-sparked recession. The defense industry titan delivered results that came in ahead of expectations for the period and remained largely upbeat for the year.

On April 21, Lockheed Martin reported first-quarter earnings of $6.08 per share on revenue of $15.7 billion, easily topping Wall Street consensus estimates for $5.80 per share in earnings on sales of $15 billion. Revenue was up 9% year over year, and Lockheed reported a surprisingly strong $2 billion in cash flow for the quarter.

The company booked slightly more revenue than it billed, which is below Lockheed's 12-month 1.14 book-to-bill ratio but still positive. Lockheed received more than $15 billion in orders during the quarter, led by Sikorsky helicopter sales and the company's missile division. 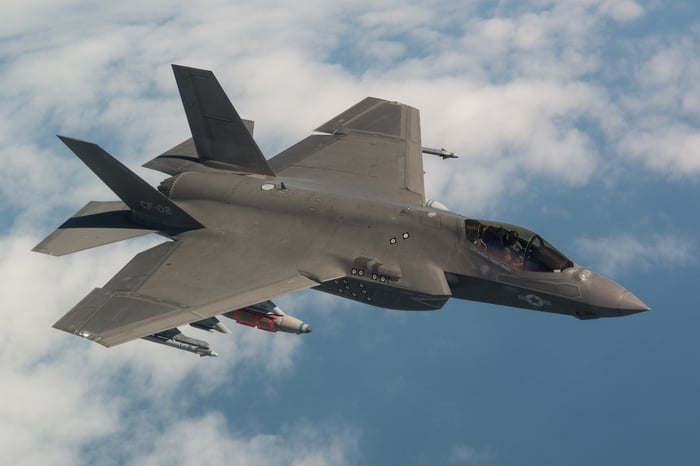 Lockheed is best known as the maker of the F-35 Joint Strike Fighter, a potential trillion-dollar program for the company and its key suppliers. Its portfolio also includes missiles, missile defense systems (including the THAAD units deployed against threats from North Korea and elsewhere), and a range of other defense products.

The company still has not yet hit full-rate production of the F-35, a program that is likely to generate substantial revenue through the rest of the decade. And Lockheed Martin is considered the technical leader in emerging areas like hypersonics -- missiles that travel more than five times the speed of sound -- that are of particular interest to Pentagon leaders right now.

Lockheed Martin's guidance was a bit of a downer, with the company reducing its full-year revenue outlook to $62.25 billion to $64 billion, down from $62.75 billion to $64.25 billion, while keeping its full-year earnings estimate steady at $23.65 to $23.95 per share. Analysts heading into the release were overly optimistic, with the consensus estimate calling for $24.12 per share in earnings on revenue of $63.67 billion.

COVID-19 is responsible for the conservative outlook. Lockheed Martin said it is monitoring 600 line items across the corporation looking for supply chain disruption threats, and it is assuming some disruption in the current quarter.

"We are beginning to experience some issues in each of our business areas related to the Coronavirus, primarily in access to some locations and delays of supplier deliveries," CEO Marillyn A. Hewson said during a post-earnings call with investors. "The situation will evolve and we will continue to monitor our business environment for areas of concern."

Lockheed Martin did stick to its full-year free cash flow guidance of about $6 billion, with the company saying it intends to use the Pentagon's planned accelerated progress payments, as well as cost savings from items like less travel and fewer air shows, to support potentially vulnerable suppliers instead of letting it flow to the bottom line.

The company ended the quarter with a backlog of $144 billion, and Hewson said on the call that Lockheed Martin believes it has ample opportunities to add to that backlog as the year goes on.

We feel good about what's in the budget request right now, as I mentioned, it does line up with the national defense strategy and that's exactly the areas that are lined up with our particular portfolio. There is the budget submission has over $3 billion in it for hypersonics, which is -- we've shown that we are a strong leader in that. We continue to see as we look beyond that, there is also some upside for NASA or Orion and for some of the Mars missions. I think there is over $3 billion that was put in increase for that. And then we continue to look at not only continued growth through the US budget side, but also on the international side.

Internationally, the company has the potential to expand the F-35 program to European allies, as well as to pick up more F-16 sales from Eastern Europe and Asia. Lockheed Martin also sees continued opportunities for missile sales in the Middle East, though it is possible slumping oil prices will delay procurement decisions -- at least for now.

Lockheed Martin's report had a decidedly more somber tone than in recent quarters, and the guidance did seem to disappoint and put the shares under pressure following the release. We're still early in earnings season, but I believe the company only shaving a small fraction off of its full-year guidance is going to make it a standout among major industrial companies this earnings season.

The COVID-19 pandemic is having some impact on the business, and a combination of low oil prices, the government refocusing budget priorities to deal with an emergency situation, and potential supply chain issues could weigh on Lockheed Martin throughout the year.

But the world is not getting any safer, and the long-term demand for Lockheed Martin's products remains strong. If we are flying into a recession, a company with a $140 billion order backlog and a customer with the wherewithal to continue to pay its bills looks like a pretty good haven, with the potential to deliver continued growth for years to come.