The owner of Time Warner subtly hinted it may be backing away from the heaping mess that is the theater industry.

While all things travel, hospitality, and entertainment have been hit especially hard by the coronavirus lockdown, movie theaters are in especially dire straits. Most theater chains are long on debt, short on cash, and dealing with revenue reduced to practically zero. Even before stay-at-home orders became the norm around the U.S., the old way of watching movies had been in secular decline for quite some time (with slowing sales being made up with higher ticket prices).

With new movie releases postponed until at least June and consumers' willingness to return to theaters a big question mark, it seems clear that movie studios will be looking for ways to continue generating revenue while cutting down on costs -- something that was important before but is now imperative. Direct-to-consumer offerings may now be that way and that's bad news for theater operators. 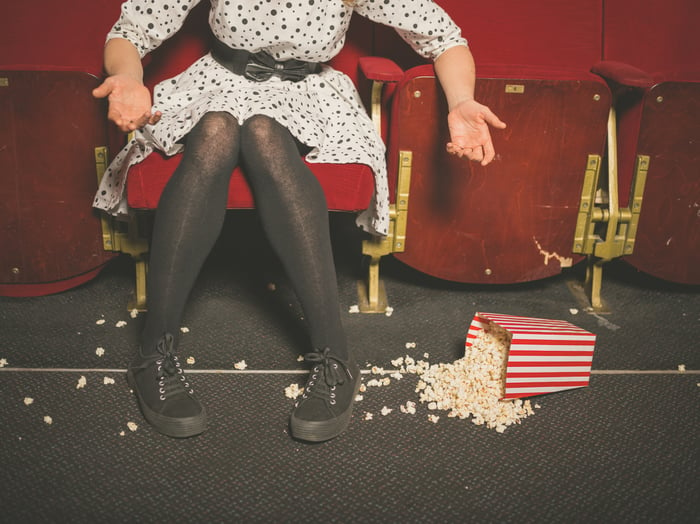 Unhappy news for the box office

During AT&T's (T -0.89%) first-quarter 2020 conference call, the company talked at length about its media business (primarily made up of the $85 billion Time Warner acquisition in 2018). It was already becoming clear the Time Warner price tag was too high and AT&T's resulting debt to complete the purchase too heavy. But now with college basketball and the NBA on hiatus, ad revenue in decline, and theaters closed up, WarnerMedia revenue is down $1.0 billion year-over-year to $7.4 billion and AT&T is thinking about how to address that issue.

Rather than being optimistic on the coming reopening of theaters, AT&T chief operating officer John Stankey (who will replace retiring CEO Randall Stephenson on July 1) had this to say on the earnings conference call:

This [pandemic] will change many things, including customer behaviors and expectations. We're evaluating our product distribution strategy, relooking at volumes and the required support levels we need in a down economy. We're rethinking our theatrical model and looking for ways to accelerate efforts that are consistent with the rapid changes in consumer behavior from the pandemic. Yesterday's announcement that we'll premiere Scoob! direct-to-home for viewing and purchase in the same window, followed by an exclusive streaming premiere on HBO Max, is just one example.

Ouch. Not exactly what theater operators want to hear right now. That's not to say the box office is dead. AT&T will get an early test of the waters when Warner Bros. distributes the Christopher Nolan film Tenet in July. But the mere mention that the movie distribution industry is being analyzed at all is testament to the fact that times are changing -- and that the changes could be accelerating.

A death knell for studios, or theaters?

Of course, this begs the question: Can production studios really afford to let traditional box office go? The first major leg of a film's monetization is the theater. In times past, total flops could still eventually turn profitable through home video release, TV distribution, merchandising, etc. But a huge portion of the cost to produce a feature presentation has historically been paid for through ticket sales.

The box office was seemingly more important than ever as some film production budgets in recent years approached $300 million, not including marketing costs (films from Disney's (DIS 0.85%) Star Wars and Avengers franchises are recent examples). Even Netflix (NFLX 1.09%) had hinted in the autumn of 2019 that its production costs were running some 30% higher than the year prior, and the sheer amount of expense dedicated to its new releases showed up (at least partly) in the Netflix's $3.14 billion in negative free cash flow last year. That suggests that if a movie's up-front cost is too high, subscription streaming isn't necessarily the answer to covering that cost. Studios need butts in theater seats at about $10 a pop to help feed the production beast.

But subscription streaming isn't the only alternative here. As AT&T said in the call, Scoob! is going to be made available for purchase at home and then sent to the upcoming HBO Max service as exclusive content. The other studios -- Disney included -- have been making movies for purchase at home available sooner than usual and, in some cases, just bypassing a theatrical release altogether. Even the world's largest theater chain, AMC Entertainment (AMC), has been promoting its on-demand films for at-home purchase.

These changes will likely mean lower revenue from the box office if this new model sticks. Is that disastrous? Maybe.

But lower revenue from lost ticket sales doesn't have to mean lower profits too. In fact, taking a long-term view, this could be a net positive for entertainment producers, albeit at the expense of the theater industry. While direct-to-consumer digital movies have overhead costs too, traditional movie distribution is expensive. Advertising to lure people into the cinema, as well as the cinemas' take of the ticket sales, are huge expenses aside from the money shelled out during actual filming. Instead of a family of four paying $50 to go to the theater, paying $25 to watch it at home makes sense -- if studios can make the habit stick at equal or close to equal profit margin.

Of course, only time will tell if coronavirus ends up being the catalyst in the next evolution of entertainment. But content producers like AT&T are obviously monitoring for changes in consumer behavior and could be ready to flip the switch on the method of delivery when the time's right.