Please ensure Javascript is enabled for purposes of website accessibility
Log In Help Join The Motley Fool
Free Article Join Over 1 Million Premium Members And Get More In-Depth Stock Guidance and Research
By Rich Smith – Apr 26, 2020 at 10:13AM

USMC is ditching its tanks in an effort to become more nimble -- and more amphibious.

"Pivot to the Pacific" is so 2014. Under the Trump Administration, the Pentagon's new mantra will be "Island Hopping, 21st Century-Style."

Six years ago, President Obama's administration announced plans to deemphasize land wars in Europe and the Middle East and refocus the U.S. armed forces on containing China's growing military might. Broadly speaking, the U.S. military would shed some of its soldiers and emphasize more spending on hardware -- naval warships, stealth fighter jets, and drones that would be used to project power into the South China Sea.

While not rejecting this policy entirely, the Trump Administration is putting its own spin on the idea, and this will have significant consequences for the U.S. Marine Corps in particular, and for the defense contractors that arm and equip the USMC. 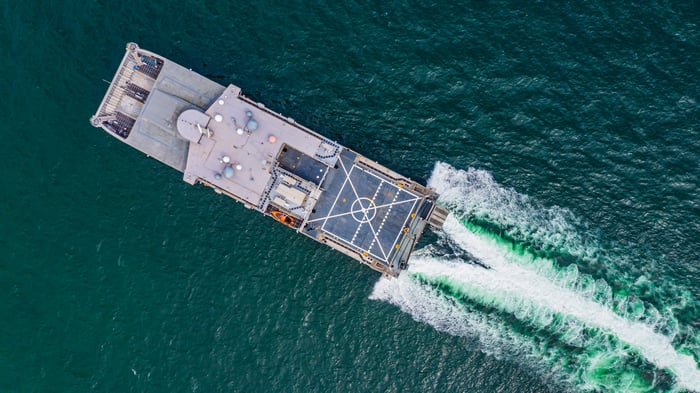 The new policy was reported on last month by USNI News. In order to shift to a "lighter, littoral" strategy, the USMC "will slash all tanks, many heavy weapons" from its arsenal. Right off the bat, that appears to bode poorly for sales of General Dynamics' (GD -2.71%) M1 Abrams main battle tank, BAE Systems' (OTC: BAESY) M777 howitzer, and Lockheed Martin's (LMT -2.13%) Multiple Launch Rocket System.

And for Lockheed, the news gets worse. The Marines will also be buying fewer F-35 stealth fighter jets, which have become Lockheed's marquee product and the prime driver behind its Aeronautics division, responsible for 40% of the company's nearly $60 billion in annual sales (according to S&P Global Market Intelligence) data. Marine fighter units will be cut from 16 aircraft per squadron to just 10 -- meaning 37.5% fewer F-35 sales to the USMC.

What, you may ask, will the Marines have left after jettisoning so much of their heavy equipment? Well, it could take some time for us to know that, precisely.

Marine Corps Commandant Gen. David Berger told USNI that over the course of a "10-year initiative, the Marine Corps will be making investments in capabilities to include increasing long-range precision fires, advanced reconnaissance capabilities, unmanned systems and resilient networks," with an emphasis on "viable unmanned capabilities."

Three new Marine Littoral Regiments (MLRs) and Marine Expeditionary Units (MEUs) will retool to emphasize "sea denial and sea control" missions. Specifically, this will involve small units of marines that can be deployed to Pacific islands, armed with drones and ground-launched anti-ship missiles with which to threaten and attack enemy forces at sea. After landing on an island and launching an attack, Marines will quickly decamp and use "a new light amphibious warship" and "affordable stern-landing and operational support vessels" to hop to another island before the enemy can counterattack -- then quickly set up and shoot again.

"Double the number of UAS (unmanned aerial systems) squadrons" will be needed to support this form of warfare through surveillance and attack, explains Berger, including both "lethal unmanned air and ground systems."

So where should investors be looking as the Marines work, between now and 2030, to make these changes happen? The naval portion of this plan is easiest to track, inasmuch as there are currently only three big manufacturers of military vessels likely to be tapped to design and build the Marines' desired warships and transports:  Huntington Ingalls (HII -2.22%), General Dynamics, and Lockheed Martin.

(That's good news for the latter two, which may make up some of the business they lose from selling fewer tanks and airplanes, by building more warships.)

Anti-ship missiles are primarily the province of Boeing and its ubiquitous Harpoon. But Raytheon also boasts some facility in this area, notably with its Griffin small anti-ship missile, as does Lockheed with its Long-Range Anti-Ship Missile.

Drones, meanwhile, are a business that almost every military contractor has a hand in. The Marines' desire for man-portable drones, however, would appear to give a company like AeroVironment (AVAV -1.16%) -- the leader in small drones, and specifically "lethal unmanned" drones -- an advantage. Depending on whether the USMC also wants bigger, faster, more powerful drones, investors might also keep an eye on up-and-coming contractors such as Kratos Defense & Security (Nasdaq: KTOS), which is pioneering the development of fast, jet-powered combat drones -- basically unmanned fighter jets.

With a newly announced policy like this one, and a 10-year timeline for the Corps' evolution, it's hard to be certain how things will ultimately shake-out. Trust that we'll be keeping an eye on things for you, though, and update as the picture gets clearer.