Please ensure Javascript is enabled for purposes of website accessibility
Log In Help Join The Motley Fool
Free Article Join Over 1 Million Premium Members And Get More In-Depth Stock Guidance and Research
By Jon Quast - Apr 28, 2020 at 11:52AM

A new five-year plan was enough to make investors overlook an ugly quarter.

Shares of Harley-Davidson (HOG -2.22%) were soaring early Tuesday morning, after the company reported first-quarter earnings. The stock had traded as much as 17% higher, and it was still trading 12% higher as of 11:30 a.m. EST. In Q1, quarterly revenue fell 6% year over year, net income dropped 46%, the quarterly dividend was slashed 95%, and worldwide motorcycle sales plummeted 18%.

Those ugly results appear incongruous with Harley-Davidson's upward stock movement. However, the company also announced it is getting back to production, and it has a sharpened vision for the future. 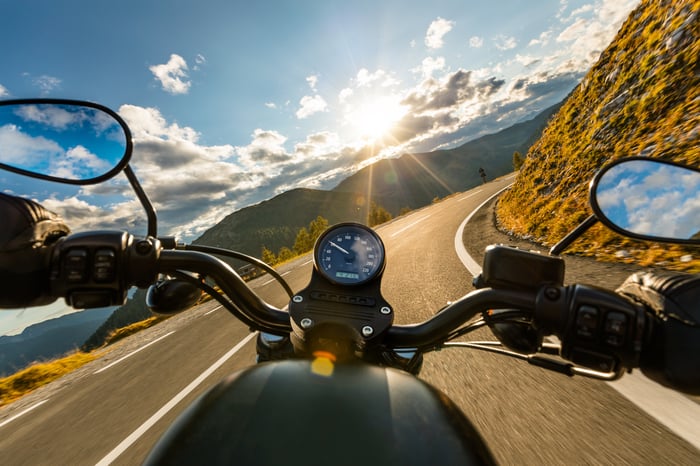 A Harley-Davidson employee tested positive for COVID-19 in March, resulting in a pause in all motorcycle manufacturing. That naturally led to a 38% decline in the stock price during March. It was unclear when production would resume. But in today's Q1 update, the company said it has already initiated a gradual restart to manufacturing.

Perhaps more enlightening was acting CEO Jochen Zeitz's vision for Harley-Davidson. He said the pause in operations from the coronavirus caused the company to do some reevaluating. It's moving forward with an initiative dubbed "the ReWire," which will result in a new five-year strategic plan for Harley-Davidson.

Key elements include vague propositions to focus on core strengths and the most profitable markets. But there are also some more practical elements, such as timing new product launches with the beginning of the motorcycle riding season. Considering Harley-Davidson has been in decline for the last five years, having a better plan for the next five is a prudent move, and one that investors apparently like. 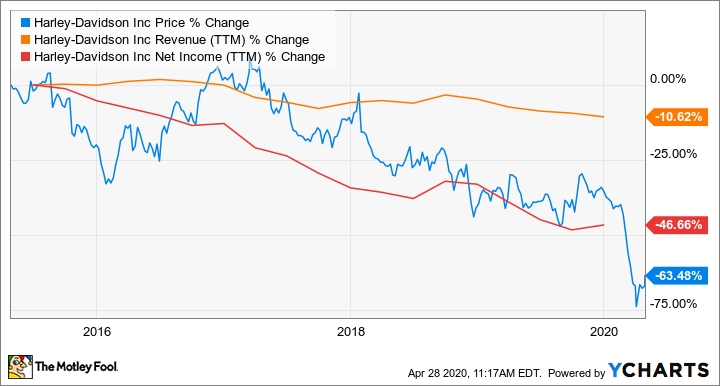 After previous CEO Matthew Levatich stepped down in February, Harley-Davidson's board began searching for his replacement. That means this is a company in transition. That being the case, now is a perfect time to come up with a renewed vision for the company's future. Clearly it must do something different.

That said, the specifics for the plan are still forthcoming. And a new CEO, whenever they are named, will likely want to put their own signature on it.Considering this consumer-cyclical company will struggle if unemployment remains high, has reduced its dividend to $0.02 per share, and is still searching for a new leader, I'd sit on the sidelines at least until this five-year plan becomes clearer.