Please ensure Javascript is enabled for purposes of website accessibility
Log In Help Join The Motley Fool
Free Article Join Over 1 Million Premium Members And Get More In-Depth Stock Guidance and Research
By Rich Duprey - May 6, 2020 at 1:06PM

Turns out social distancing isn't such an impediment to online dating.

Shares of Match Group (MTCH) jumped 16.5% in April, according to data from S&P Global Market Intelligence.

That's not the sort of result you'd expect to see from the owner of Tinder, Plenty of Fish, and its self-named online dating service. At least not when it's supposed to be getting people together in a time of social distancing. 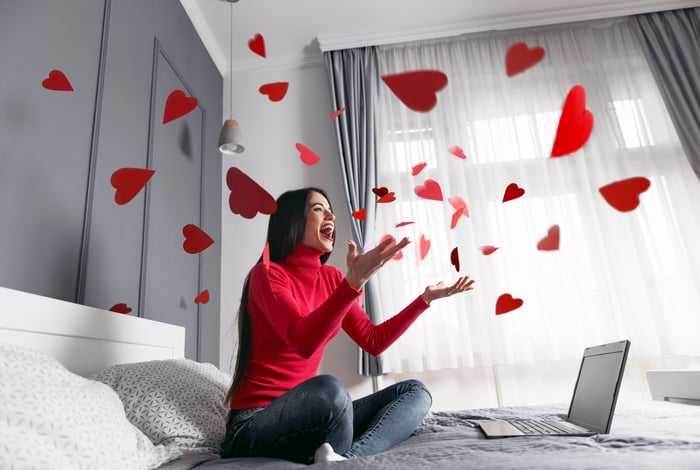 While there was a slowdown in partner pairings following the coronavirus outbreak and Match even exited March saying, "We expect our Q1 results to be around the low end of the ranges we previously shared publicly," it turns out singles stuck at home remain just as eager to meet someone. Well, remotely anyway.

Parent IAC/Interactive (IAC) says video dating became a vital source of communication for people, and what Match had introduced as an adjunct to its dating service would end up being rolled out to most of its sister sites. It may, in fact, become the future of dating.

Match Group just released earnings that showed although subscriber growth slowed in the quarter, revenue, particularly at Tinder, continued climbing, up 17% for the quarter. It previously noted that despite subscription rates taking a hit, the length of users' conversations actually increased, rising 10% to 30%, particularly for those aged 30 and under.

Match also says the planned spinoff from IAC is still on track to be completed in the second quarter.