Please ensure Javascript is enabled for purposes of website accessibility
Log In Help Join The Motley Fool
Free Article Join Over 1 Million Premium Members And Get More In-Depth Stock Guidance and Research
By Rich Duprey – May 11, 2020 at 12:00PM

The fashion retailer is heading down the wrong path with this new idea.

Although Gap (GPS -0.95%) is well-known for its jeans, khakis, and clothing styles for everyone in the family, it just announced a new branding deal with global licensing firm IMG to expand its product line beyond apparel and head into home decor, textiles, furniture, baby equipment, and baby care.

While Gap is under pressure due to the coronavirus pandemic, transforming into a department store just as that segment of retail looks poised to collapse hardly seems like the transformative plan the retailer needs. 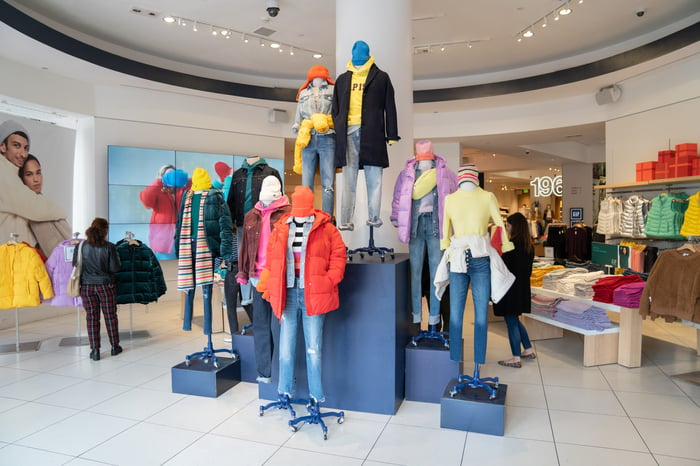 There is an argument to be made for expanding beyond the confines of a niche you have fully explored, but while Gap might have had grounds to argue it was a "lifestyle brand" a few years ago, consumers have been abandoning its stores in such droves that it can no longer credibly make that case.

Yet in announcing the new direction the retailer was taking, Gap's head of franchise and strategic partnerships Roy Hunt said, "This partnership with IMG presents a unique opportunity for us to bring our fashion and lifestyle brands to life in new ways for customers around the world, while still maintaining the creative integrity that make[s] each of our brands so distinctive and recognizable in the marketplace."

And that's just been the problem. Gap's brands are no longer unique from what's out there, which is why sales have fallen so miserably.

Every single Gap concept failed to record a single instance of same-store sales in any quarter of 2019 and its namesake store has notched only one quarter of positive comps in the last five years. The Banana Republic chain is hardly better, with just a handful of quarters that saw growth in the last half decade, while Old Navy, which was once its shining star, is now consistently in negative territory.

This is performance that's hardly indicative of a lifestyle, let alone a brand that consumers want to embrace with home decor and furnishings. 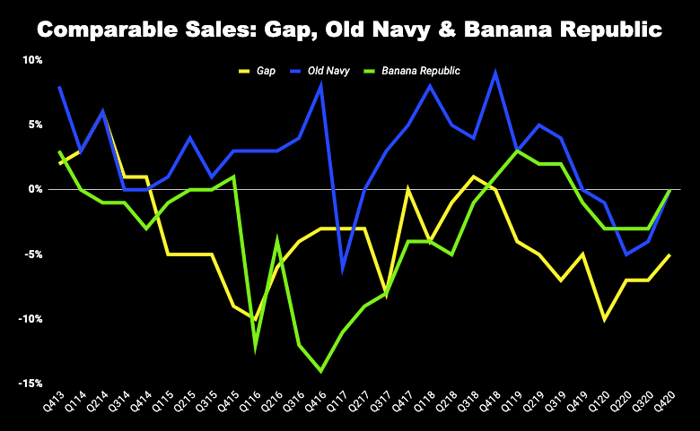 Gap says the licensing deals will begin with The Gap stores, Banana Republic, and the Janie and Jack chain of high-end children's clothing stores it acquired when Gymboree went bankrupt.

That means it is banking on what is largely a failing group of stores. While it may see this as an attempt to turn those businesses around, it's doubtful J.Crew adding furniture, rugs, or household doodads to its product selection would have kept it from declaring bankruptcy.

Gap is not leading with its best foot forward. The IMG deal excludes Old Navy, its athletic apparel chain Athleta, the luxe fashion retailer Intermix, and Hill City, an Athleta-style premium athleisure chain for men. Those are Gap's strongest brands, though they're comparatively very small still.

Last year when Gap was watching sales fall at its primary concept stores, these other stores (excluding Old Navy) were reporting growth. Fourth-quarter revenue for the chains was 1% higher than the year-ago period and 9% higher for the year, though Athleta represented 80% of the total.

While there may be some justification for extending the Janie and Jack brand because it could appeal to upscale consumers arguably less impacted by the pandemic than others, moving forward on a brand deal for Athleta would have made more sense. For chains that are losing sales and customers, though, even if they are well known, it seems misguided at best.

It also seems to be a poor time to widely diversify your product offerings so that you essentially create a department store with different sections for clothes, furniture, and home furnishings.

That style of shopping has been waning for a while and the pandemic has exposed the serious financial fault lines that exist underneath retailers like J.C. Penney, Macy's, and Lord & Taylor, which is reportedly prepared to begin liquidating its stores.

Although Gap and Banana Republic do hold significant brand value still, it is declining considerably. They are hardly lifestyle brands anymore.

At a time when it has furloughed workers, cut executive pay, laid off 10% of its corporate staff, halted rent payments, canceled orders from vendors, halted stock buybacks, suspended its dividend, and drawn down the entirety of its $500 million credit line, this hardly seems the right time to embark on a quixotic campaign to be all things to all people.